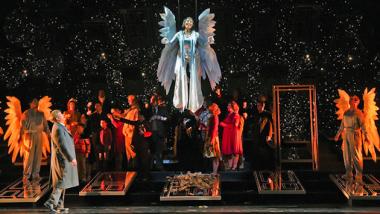 A chameleon, Jake Heggie is not. But he is someone whose interests and predilections have taken him on a wide course: from the death penalty (Dead Man Walking), Nazi persecution of homosexuals (For a Look and a Touch), and a classic novel (Moby-Dick) to ridiculous farce (Great Scott) and all manner of Broadway-tinged camp, sop, and silliness.

For Houston Grand Opera’s 2016 “Christmas Opera,” which was co-commissioned with San Francisco Opera and Indiana University’s Jacobs School of Music, Heggie went to Hollywood, so to speak, for It’s a Wonderful Life. Basing the opera on both the classic movie that starred Jimmy Stewart, and Philip Van Doren Stern’s story, The Greatest Gift, he and his longtime librettist, Gene Scheer, had a ball. 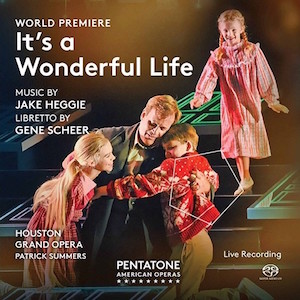 The opera was recorded live during its premiere run in ringing, less-than-stellar but nonetheless serviceable sound. Available as either a Pentatone two-disc hybrid SACD set (PTC 5186 631), or as a download in multiple formats (including high-resolution 24/96 PCM, which is the format auditioned for review), the recording reveals an opera filled with drama, joy, humor, and, at story’s end, a fair share of sentiment.

Heggie’s music is a most agreeable mix of arias, chorus, and extended scenes that will neither scare lovers of the Romantic canon nor dismay those looking for something fresh and different but not too far off the beaten path. The score moves at a rapid pace, is frequently uplifting, clearly illuminates the story, and may touch the hearts even of those who think the Christmas season is way overrated.

It also has some fine showpieces. The first aria for Second Angel Clara (soprano Talise Trevigne) is delightful; the many arias and scenes for George Bailey (tenor William Burden) and his eventual wife, Mary Hatch (soprano Andrea Carroll) are complete in their range of emotions. The quartet “Goodbye Bedford Falls” is a showstopper, and some of the choruses are quite effective. There is also a lot of dialogue which, if not particularly distinguished melodically, keeps things moving.

The singing is superb. Burden, who participated in the Merola Opera Program in 1989-1990, must have been pushing 50 or more when he first stepped onto the Houston stage as eager, young George, but his tone is as fresh and gleaming as someone’s in their 20s. While there’s definitely an operatic bent to his voice that reminds you that he can sob with the best, his heartfelt and sincere emoting is ideal for the story. Trevigne, who initially teases us stratospherically before coming down to earth (literally), is an absolute joy from first note to last. Carroll can sound a bit heavy when overwrought, but when she sings lightly and sweetly, she’s quite wonderful.

But that’s only half of the embarrassment of riches cast. For the mature roles of Mr. Gower/Mr. Potter (baritone Rod Gilfry) and Uncle Billy Bailey (tenor Anthony Dean Griffey), Houston Grand Opera and its conductor, Heggie champion Patrick Summers, chose two superb veterans who have sung multiple lead roles in San Francisco and who are still very much in their prime. For George’s father, Harry Bailey (baritone Joshua Hopkins), we have another artist whose schedule is filled with leading roles in operas that open in major houses. And then there’s the unmistakable “A Voice” (Patti Lupone), of whom we need say no more.

Although voices are favored over orchestra in the recording, the Houston Grand Opera Orchestra plays as one with Heggie’s score. Ditto for the 16-person chorus, 13 of whose members also sing smaller roles.

It’s a Wonderful Life opens at San Francisco Opera on November 17, with Burden, Gilfry, and Hopkins reprising the roles they premiered. The opera is not only perfect for the holidays, and for children of all ages — it’s also ideal for anyone who loves a good tale and an opera that will leave you feeling better about humanity’s potential for goodness.

The new collaboration with librettist Gene Scheer debuts in Houston this week and will greet the Bay Area holiday crowd in 2018.