James MacMillan Pulls Out the Stops For His Choral Fifth Symphony

The British tradition of writing numbered symphonies really got going in the 20th century, producing a long list of entries (the astounding Havergal Brian wrote 32 of them) that are mostly unknown in America. The Scottish composer James MacMillan has continued the tradition into the 21st century — with rather diverse results.

The first one, Symphony “Vigil,” is a huge, multifaceted, somber, at times violent canvas, spectacularly orchestrated, where the fate motif of Beethoven’s Fifth recurs. Symphony No. 2 is more of the same in general but with a lighter touch and only a little over half as long, with the Tristan chord now as a motif. The Symphony No. 3 has an overt Asian flavor, inspired as it was by a Japanese novel, Silence, and the Symphony No. 4 contains evocations of Scottish fiddle tunes, a Renaissance feeling, lots of mood and style changes, and a joyful jangle of bells and temple bowls to close. 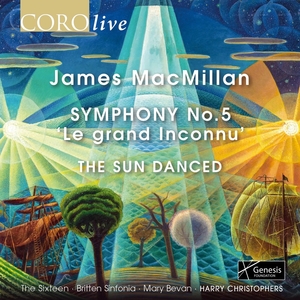 All of which leads to the MacMillan Symphony No. 5 — or should I say, doesn’t lead to the Symphony No. 5, which is nothing like its predecessors. First heard last August at the Edinburgh Festival, the MacMillan Fifth, subtitled Le grand Inconnu (referring to the mystery of the Holy Spirit), is a full-blown choral symphony — at 50 minutes, MacMillan’s longest — and part of it is set to lines from the hymn “Veni, Creator Spiritus” that also occur in another mighty choral symphony, Mahler’s Eighth. A new recording (from CORO) with Harry Christophers leading the Britten Sinfonia, a small chamber chorus (The Sixteen), and a larger chorus (Genesis Sixteen) reveals all (heard here from a stream).

The symphony’s three lengthy movements are given the designations of “wind,” “water,” and “fire” respectively. Accordingly, the first movement commences with a wind machine taking deep, deep breaths, and the harp and strings that open the second movement are like raindrops. Although a choir serenely singing a text by St. John of the Cross at the beginning of the third movement does not literally illustrate fire, you could call it a quiet fire signifying love.

Working with such large forces, MacMillan understandably can’t resist the temptation to release their bombastic potential. So the voices wail, the brasses blast, and all is mega-glory. Yet a good deal of the time, there is a surprisingly transparent texture in the large orchestra, and MacMillan parcels out the big moments skillfully.

The companion work on the recording, The Sun Danced, is a cantata sung in Latin, English, and Portuguese that celebrates the centennial of the Apparitions and the Miracle Of The Sun at Fátima in 1917. The central part is the most compelling, an impassioned prayer for peace and the end of war — this while World War I was still raging — as sung by an apparition of the Virgin Mary aka Our Lady of Fátima. I don’t buy the story of this “miracle” — Mary returning to make the sun dance around in the sky — but MacMillan’s colorfully-instrumented orchestral fantasy midway through entices the ear on its own terms, and the fine soprano also happens to be named Mary (Bevan).

Prokofiev delights in blurring boundaries in his quest to bring classical music into the 21st century.

Curlew River arrives at Zellerbach Hall next weekend. The story of seeking and redemption, set to the music of Benjamin Britten, is also a story of fulfillment for visionary British director Netia Jones.