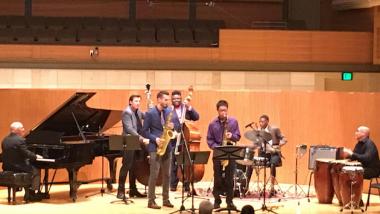 The San Francisco Conservatory of Music’s new four-year bachelor’s degree program Roots, Jazz, and American Music (RJAM) is about a month old, but this baby is already swinging.

At RJAM’s first public event, Saturday night in the conservatory’s concert hall (a last-minute move from the Sol Joseph Recital Hall to accommodate the audience), four mixed ensembles featuring both faculty and students played two tunes each, offering an impressive work-in-progress look at a program with tremendous promise.

RJAM attained instant credibility and visibility at its inception by partnering with neighboring SFJAZZ, drawing on the SFJAZZ Collective’s all-star personnel for its core faculty. Since Venezuelan-born pianist Ed Simon is the only Collective member residing in the Bay Area, the students work intensively with the veteran players when they’re in town (the SFJAZZ Collective kicks off its fall season at Stanford’s Bing Concert Hall on Oct. 21).

Saturday’s concert presented a snapshot of what the students had been working on the last few days. It speaks well for the undergrads that the fewer faculty members on stage, the more confident they sounded.

The second ensemble, a quintet with Ed Simon and his Collective bandmate Robin Eubanks on trombone, delivered a far more relaxed and satisfying set. The original “Blues for Pete,” which brought to mind Monk’s “Rhythm-a-ning,” featured a thoughtful and well-crafted solo by tenor saxophonist Jayden Clark, who possesses a thick, burnished tone.

Drummer Matt Wilson, who’s become a subversive force in jazz education by encouraging musicians to break out of tired performance conventions and learn how to connect with audiences, led a quintet with tenor saxophonist Jason Hainsworth, a player who made a powerful first impression (Rowe described him as his key collaborator on the faculty). The group tackled the most ambitious original composition of the evening, an evocative, episodic sketch by pianist Andrew Weitz, “The Light Between the Branches.” With Hainsworth and trumpeter Brett Karner creating a beautiful blend, the group finished with Wilson’s beatific setting for Carl Sandburg’s brief but luminous verse “Bubbles” (recited by the drummer).

SFJAZZ Collective bandmates David Sanchez (tenor sax) and Warren Wolf (vibes) dominated the last set, taking the lead on a Latin-tinged arrangement of Monk’s “Round Midnight” and a spacious version of Eddie Harris’s standard “Freedom Jazz Dance.” As two of jazz’s most charismatic improvisers, they delivered a great set for the audience. The students had less space to solo than earlier sets, but they made it count when they got a chance to step forward, particularly conguera Amelie Hinman.

Working with the materials at hand, Matt Penman closed the concert with a bass quintet showcase for the program’s four bassists that was lively and playful, leaving no doubt why the instrument is over-represented in the inaugural class. By the end of the show, RJAM seemed to have arrived as a valuable new addition to the region’s rich jazz education infrastructure.