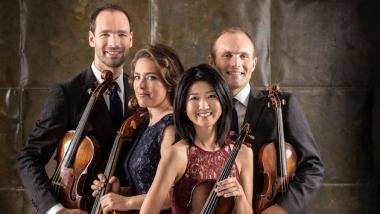 Franz Schubert was a frustrated opera composer. None of his works for the stage were successful, and he poured some of his frustration into his lieder for voice and piano. Tenor Nicholas Phan and the Jasper String Quartet decided to give headway to Schubert by opening up the piano accompaniments of some of these Lieder, arranging them for the broader four-part ensemble of a string quartet. They performed a half-dozen of these at a San José Chamber Music Society concert at the Trianon Theatre on Sunday, January 28.

The arrangements, worked out by the quartet while playing from the piano parts, transcribed and edited by violist Sam Quintal, and then reworked in collaboration with Phan, are most ingenious and effective. Where Schubert has the pianist’s two hands playing different patterns, the Jasper arrangements may divide these between upper and lower voices in a 3-1, 2-2, or 1-3 assignment, or 2-1 or 1-2 with one instrument silent, shifting among these as emphasis in the music suggests. They also vary between sustained and staccato, arco and pizzicato: options difficult to convey on a piano.

Schubert put much of the characterization in his songs in the accompaniment, so changing the instrumentation alters the context. The sound with the quartet is not only more operatic than with the piano, it brings out the classicism in Schubert’s writing. Der Sänger (The singer) never sounded more like a recitative from a Mozart opera than it did in this performance.

The arrangements also brought out something of the operatic in Phan’s voice. He boomed in this small venue more than he normally does on the concert stage. Trianon is a superb venue acoustically for instrumental chamber music, but it has its limits with the human voice, which tends to get buried under reverberations. This performance tested those limits.

In dramatic story-telling songs like Der Erlkönig (The elf king) and Der Zwerg (The dwarf), Phan did not attempt distinct vocal tones for the various speaking parts and the narrator. Instead, Phan conveyed meaning with word emphasis and dynamic variance. He has a particularly neat trick of sudden decrescendo, seeming to leave the last loud note hanging in the air while his newly quiet voice ducks underneath it.

Not content with arranging Schubert, Phan and the Jasper players worked the same magic on some of Benjamin Britten’s arrangements of English folk songs, written as encore pieces for his own recitals with Peter Pears. For his accompaniments, Britten opted for a complex, modernistic style in the spirit of his teacher, Frank Bridge. In the Jasper arrangements, these came off as quiet and luminous. Phan sang with a broad and stately air faintly reminiscent of Pears’s concert style.

The songs were not enough for a full program, so it also included a standard instrumental quartet by each composer. Schubert’s Quartettsatz in C Minor, in a dramatic, biting performance, showed the Jasper Quartet as an ensemble with evenly matched, gently intertwining violins and viola on top, with Rachel Henderson Freivogel’s cello going its separate, deeply growling way underneath.

This sound would not be appropriate for Britten’s Quartet No. 2 in C Major, which is built largely of 3 vs. 1 patterns, with the singleton role constantly traded off. It received a balanced sound, with more separation among the violins and viola, less from the cello. Despite a generous helping of fat C-major chords, this 1945 composition can feel seriously modernist. The Jasper players gave it all the bristling intensity of a first-rate performance of Shostakovich, which at times it startlingly resembles. (Britten came first.) While the complexity of the concluding Chaconne was not easily graspable, it made for a vivid sound, as did the spooky intensity of the Scherzo’s fortissimo passages with mutes on.

That the Jasper’s second violinist was called away on a family emergency and had to be replaced hastily by Karen Kim, formerly of the Parker Quartet, did not interfere with the excellence of the ensemble at all.

Anthony Reed and John Parr tread the delicate line between power and intimacy.

Getting to Know Recitalist Nicholas Phan

Songs are the heart of the matter for this American tenor.