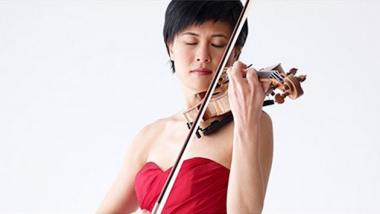 The Marin Symphony powered up to open its 2017–18 season Sunday afternoon at the Marin Center Veterans’ Memorial Auditorium in San Rafael. First with the orchestral showpiece Night on Bald Mountain and later on in Tchaikovsky’s fervent Symphony No. 4, the ensemble displayed a bright and impressively steely sound. The strings gleamed. The brasses sang out in full-throated choruses, led by a sterling complement of French horns. Timpanist Tyler Mack was by turns crisp and thundering in his peerless attacks.

But it was the gentler and more expansive work that came in the middle of the program that made the day something truly special. With a sublime Jennifer Koh as soloist, Music Director Alasdair Neale led a graceful, lucid and deeply affecting performance of Samuel Barber’s 1941 Violin Concerto. Right from the start, with Koh unfolding the opening subject in a warm and confiding manner, an air of sensitive, nuanced responsiveness took hold.

When the strings took up the theme, they both mirrored and expanded on the soloist’s eloquence. Koh’s exchange with the clarinet seemed to reframe the movement’s argument on fresh new terms, which were in turn intuitively felt by the horns and then the rest of the band. Gradually a more mournful, even tragic veil descended, even as the solo violin took on a probing new radiance.

Composed when Barber was in his late 20s but not premiered until several years later, the Concerto is a strikingly mature work. In its middle Andante movement, the piece heads for deeper waters, after a deceptively tranquil opening voiced by the oboe. Koh, without losing any of the long-lined gracefulness of her phrasing, explored an earthier, woodier tone as the movement progressed. The formality of her dress and bearing — glamorous but demure in a spangly floor length gown — belied the frankness and soul-baring emotion of her playing. Neale was with her every step of the way.

The closing Presto is a daredevil technical feat. Koh leaned into it, firing through the whirling note thickets. Her decisive accents and keen-edged sound gave the movement its angular, rhythmic pulse. The woodwinds capered along with her towards an emphatic, feverishly joyful climax. The large crowd rewarded the artists with a prolonged and well-deserved ovation.

The Tchaikovsky occupied the second half of the bill. Neale led a brawny, borderline aggressive reading of the score. There was plenty of sonic excitement, especially from the brass and violin sections. But everyone got into the act – from the cellos sighing longingly in the Andantino movement to the flowing woodwind runs later on to the tidal waves of the symphony’s last movement.

All the big sound came at the expense of a certain delicacy and character when they were needed. The waltz-meter passages in the first movement came off in lockstep. The statement and elaboration of the folk melody in the fourth lacked charm. The woodwinds took on a lightly acrid tone at times, especially the oboe. Dynamics tended toward high contrasts rather than more artful shading.

If not the most shapely Tchaikovsky Fourth, this was a propulsive ride with plenty of momentum. Neale’s tempos were brisk and forthright and the contours clearly drawn. When it came time for the horns to echo the ominous fate motif of the first movement near the end of the piece, an ominous thrill went through the house.

The concert opened with the Halloween-appropriate Night on Bald Mountain (first titled The Witches by Mussorgsky). Brilliantly finished and colored by Rimsky-Korsakov’s orchestration, the piece got the kind of atmospherically ripe performance it needs. Eerie, tight string tremolos got things off to a suggestive start, with plenty of shiny and brassy effects to come. The woodwinds sounded a little fuzzy at points, but the darkly braying brasses and shimmering strings kept painting a vividly drawn, late October picture.

The violinist brings her four-part project to San Francisco with a diverse group of composers.

SFCV talks to the conductor about his time with the Marin Symphony and his vision for the future.

If Sunday’s season opener is any indication of the care and dedication with which each Marin Symphony program will be presented, fans of the orchestra have a lot to look forward to.