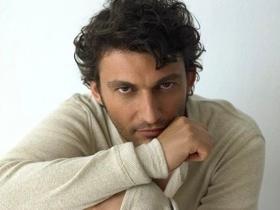 To prolonged high-pitched cheers and applause, Munich-born tenor Jonas Kaufmann, 41, strode onto the stage of Zellerbach Hall. In the presence of his gifted accompanist, Helmut Deutsch, the tall, dark, handsome, and extremely curly-headed singer smilingly greeted an adoring audience eager for his Bay Area debut.

Unamplified, but with electronically enhanced 1.5 second reverberation provided by Cal Performances and Meyer Sound, the tenor launched into an extremely generous lieder recital that included four songs from Schumann’s Kerner Liedern, Op. 35, the entire Dichterliebe, Op. 48, and 13 songs by Richard Strauss. After that came five encores, the last made possible by Deutsch’s iPad copy of the score. Those who stayed through the entire 2 ½ hours experienced one of the most versatile, compelling, and vexing recitals in memory.

Will the real Jonas Kaufmann please ...

Kaufmann’s unique instrument is as multifaceted as a complete response to the rapidly changing emotions of German romantic poetry and music demands. One minute, he sounds like a heldentenor, with the gleaming high tones of an artist preparing for his imminent Metropolitan Opera role debut as Siegmund in Wagner’s Die Walküre. Then he softens, and you’d swear that you’re actually listening to a lyric tenor who is pushing his instrument to its limits.

When Kaufmann sings lower in the range, the production is so easy and full that you imagine he’s a baritone with a high extension. Upon occasion, the tone is throaty, almost gruff, as if to give credence to fears that he is singing on principal rather than interest. But then the clouded tone or covered phrase passes, and all you hear is glory.

The effect, at least for this listener, is unnerving. If the voice, like the eyes, is an avenue to the soul, Jonas Kaufmann’s core is so complex that you can’t be exactly certain who he is. He’s a sweetheart, almost a pussycat one minute; three bars later, when he’s seamlessly swelled from almost falsetto-like purity to the clarion-like fortissimo of a Wagnerian hero, you sense that you pet this tiger at your peril.

Beyond his instrument, which is head turning in and of itself, Kaufmann brings rare intelligence to his repertoire. Without in the least sounding fussy or overcalculated, his wealth of shading revealed that he not only understood but also deeply felt what he was singing about.

Take the 16 songs of the oft-programmed Dichterliebe, with text by Heinrich Heine. The contrast with last week’s baritone rendition by Eugene Chan, and previous Cal Performances tenor versions by Ian Bostridge and Rolando Villazón, was striking. There were no eccentricities of tempo, and no attempts by Deutsch to show how penetrating he could be by grandstanding and lingering too long in the pianistic postludes. Instead, we experienced two firmly committed, deeply probing artists whose responses arose directly from the notes and words on the page.

There were multiple miracles. To express the youthful gush of love and joy in Die Rose, die Lilie, die Taube, die Sonne (The rose, the lily, the dove, the sun), Kaufmann managed the eight lines of the rapid, two-stanza song in only three breaths. Every note and word was clearly produced. Then, in the next song, when he sang, in translation, “Yet when I kiss your lips,” his very different sound grew inward and deeply passionate. And while others have sounded less pressed in the high climax to Ich grolle nicht, the flexibility of tempo and extreme dynamic swell to the peak were exemplary.

Few singers can so fully embrace the ironic ditty of a tune that is Ein Jüngling liebt ein Mädchen (A young man loved a girl) as did Kaufmann, who managed to sound sing-songy in the beginning and deeply wounded in the end. To instantly transition from his almost venomous outburst of anger and hurt to the heart-breaking softness of the exquisite An leuchtenden Sommermorgen (On a shiny summer morning) bespoke artistry of the highest order. Equally poetic was Deutsch’s handling of the final pianistic postlude, which lingered on one phrase, sped up the next, and ended with shocking abruptness.

For anyone accustomed to the Strauss performances of his two finest 20th-century soprano exponents, Elisabeth Schumann (whom Strauss adored and accompanied) and Elisabeth Schwarzkopf, Kaufmann offered a very different way in. In place of silvery tones and gravity defying, feathery highs came the passion of a man at the height of his powers. The contrast between the extremely soft ending of Freundliche Vision (Pleasant Reverie) and the huge declamation that concluded Ich liebe dich (I love you) was, if Valley Girl superlatives be allowed, totally awesome.

Equally stunning, the beautiful conclusion of Heimliche Aufforderung (Secret Invitation). Morgen (Tomorrow) was less successful, the opening vocal phrase rough, the declamation lacking ultimate flexibility. (Deutsch did much to compensate in the postlude.) But despite a pushed climax, the final song, Cäcilie (Cecily), was thrillingly exultant.

Marvels continued in the encores. Kaufmann’s rendition of Lehar’s beloved Dein ist mein ganzes herz (You are my heart’s delight) rivaled that of its dedicatee, Richard Tauber. The difference was that Kaufmann’s honeyed sweetness on soft notes was produced, not by falsetto, but by a masterfully controlled, finely tapered full voice. The final selection, Schumann’s Mondnacht (Moon), was sung with such caressing softness and complete control that it was hard to believe that it came at the end of an extremely long recital. As vexing and even troubling as Kaufmann’s vocal production may be, his artistry is supreme. And he does look fabulous.