Did tenor Jonas Kaufmann consider how risky it was to record an album of 27 mostly familiar German lieder at this stage of his career? It may only be 14 years since he attained superstar status, in his 37th year, after the release of a Strauss lieder recital on Harmonia Mundi and an album of romantic arias on Decca, but he has since sustained at least one vocal crisis and taken on roles as heavy as Verdi’s Otello and Wagner’s Parsifal. Even in the simpatico company of his former teacher and frequent recital partner, Helmut Deutsch, the question is, does he still have the ability to convincingly go small scale and intimate? 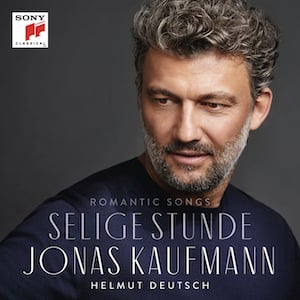 While Kaufmann doesn’t share any such fears in the interview printed in the liner notes of the Selige Stunde (Sony 636976, released Sept. 4), the collection he and Deutsch have recorded is very hit and miss. They certainly don’t get off to a good start with Schubert’s “Der Musensohn” (The son of muses). An endearing strophic setting of a Goethe poem about a young lad who roams fields and forests whistling a naively simple tune, filled with expectation, love, and a final peppering of longing, it is usually sung by lighter-voiced lyric singers ranging from, in Kaufmann’s range, sopranos Elly Ameling, and Elisabeth Schumann to tenors Fritz Wunderlich, Anton Dermota, Christoph Pregardien, and Ian Bostridge. Kaufmann sounds far too labored to be carefree, as if some of his upward leaps barely hold together.

The impression of the singer's being stretched to his limits is exacerbated in the second selection, Beethoven’s great love song “Adelaide.” Some soft tones sound ragged around the edges, and louder passages on high are far too aggressive, as if Adelaide had better answer Kaufmann’s call, or else! Nor is the performance helped by Deutsch’s metronomic pianism, which throughout the recital reserves virtually all tempo inflection to a song’s final measures and rarely allows for heartfelt lyrical expansion or nuance. Even the duo’s remake of Richard Strauss’s “Zueignung” (Devotion), which they recorded on the 2008 recital, is marred by a  strained upward leap to the final “heilig, heilig” exclamation of holy rapture, singing that is not always seated firmly in the center of the voice, and a lack of fluidity.

Surprisingly, some of the most exposed selections find Kaufmann in better estate. Given what comes before it, one would expect him to falter a bit on the challenging, long upward-rising phrases of Schumann’s sublime “Mondnacht” (Moonlit Night). Instead, he sings seamlessly, without blemish, with only a bit of incongruous heaviness on the final phrase, “als flöge sie nach Haus” (as if it were flying home) marring an otherwise wonderful performance. He also sounds perfect, save for the tempo at the end, in Mahler’s world-weary “Ich bin der Welt abhanden gekommen,” (I am lost to the world).

At the time I write this, the only other selection from the album available online is a quite fine performance of another simple strophic song, Brahms’s “Da unten im tale” (Down there in the Valley). But if you want to discover what else you can draw from this song, turn to Elisabeth Schumann or the equally endearing, imaginative and extraordinarily nuanced Lotte Lehmann, BBC New Generation artist Fatma Said, or, in the lyric tenor department, clear-voiced Werner Güra.

In no way do I wish to question Kaufmann’s innate understanding of these songs. His 100 percent commitment and love for the repertory are manifest throughout, and his exceptionally clear enunciation is commendable. But if you love Schumann’s glorious “Widmung” (Dedication), it is to the far less rushed Kathleen Ferrier or to any number of more romantically effusive artistic collaborations that you will turn. You’ll also turn to Bidu Sayao for a vocal transcription of Chopin’s Étude Op. 10/3, and to someone with a bit of a tear in the voice for Dvořák’s “Als die alte Mutter sang” (Songs my mother taught me).

As for magic and charm, the Kaufmann/Deutsch rendition of Mendelssohn’s “Auf Flügeln des Gesanges” (On wings of song) pales beside countless versions, including Elisabeth Schumann’s incomparable rendition with orchestra. Why the two men even bothered with Mozart’s “Das Veilchen” (The violet) or Schubert’s “Die Forelle” (The trout) is beyond me. But don’t miss the rarity for which the album is titled, Alexander Zemlinsky’s “Selige Stunde” (Blessed hour).