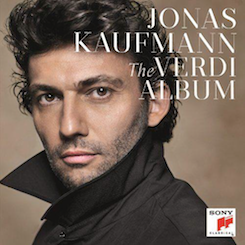 As one of opera’s leading tenors, Jonas Kaufmann was not going to let the Verdi bicentenary go by unnoticed. Even though, before recording the extended recitatives, scenas and arias in his new Verdi album (released Sept. 17), he had sung only two of them onstage, he has forged ahead, not only with the recording, but also by preparing to add the leads in Il trovatore and La forza del destino to a Verdi performing history that heretofore has included only La traviata and Don Carlo.

This 12-track recording is certainly a major statement. With the support of the Coro del Teatro Municipale di Placenza and Orchestra dell’Opera di Parma, forcefully conducted by Per Giorgio Morandi, Kaufmann not only includes recitatives and arias from the composer’s most popular masterpieces, but also sings less frequently performed selections from Luisa Miller, Simon Boccanegra, and I masnadieri. (The “Deluxe Edition” also includes a 13th track, the Act 4 scena and aria from Macbeth, “O figli, o figli miei!...”Ah, la paterna mano.”)

The weight, passion, and gravitas that Verdi demands are hardly a challenge for the remarkably versatile Kaufmann. How many tenors in the past century can claim his success in Parsifal, Werther, Tosca, and Don Carlo, let alone operas and songs by Richard Strauss, Mozart, and Schubert?

Emotionally and technically, Kaufmann is up there with the best Verdi tenors on record. Take, for example, his generous, almost 8-minute-long selection from Il trovatore, “Ah! si, ben mio … Di quella pira.” The opening aria, sung with emotive sobs and other devices central to the Verdi tradition, includes several perfectly placed trills.

Kaufmann then proceeds with an excellent rendition of the cabaletta, “Di quella pira.” He launches into the music by credibly negotiating the difficult staccato ornaments on the word “pira.” Sometimes he sounds them all; at other times, he gracefully elides over them. At the end, he extends the high C to a thrilling length. Yes, Franco Corelli holds his high C to impossible and even more viscerally exciting lengths. But he’s the exception. Björling, in his complete recording of Il trovatore, short-changes in the thrill department, and Pavarotti (with Bonynge) sounds prosaic in comparison.

Kaufmann also amazes in Radames’ Act 1 Scena e romanza from Aida, “Se quell guerrier io fossi! ... Celeste Aida.” In the liner notes, he issues a challenge to every tenor who has sung the final B-flat full-out.

“On no account should this note be blasted out. If tenors none the less do so, this is usually because they are worried that audiences will think that they are crooning or perhaps that they are not sufficiently masculine. This macho complex is unfortunately widespread. Yet such a piano sound requires at least as much power as a tremendous forte, for physically speaking, the singer should be able to turn up the volume at any moment and transform this piano into a forte.”

Of course, he sings the final note as written. Not only is his diminuendo almost perfect, but he also tapers to a remarkably sweet sound, which he manages to hold through much of the orchestral close. If he can accomplish this feat onstage, he will surely bring down the house.

Yet, despite Kaufmann’s many technical accomplishments, The Verdi Album also raises questions about his ultimate suitability for Verdi. While his fans will doubtless be enthralled by his every utterance, more than a few listeners may find themselves wishing that, instead of throaty tone lower in the range, Kaufmann could bring to every note the same Italianate ping that distinguishes his upper extension.

Then again, so much of what he offers is so musical, exciting, and beautifully executed that we can only hope for the chance to hear him sing Verdi in the Bay Area in the near future.