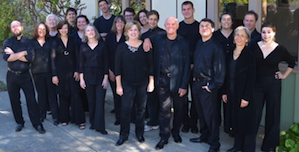 After a tiring day in the crowded Christmas shopping precincts of Union Square and Market Street, what better way to refresh the soul and enjoy the holiday than to climb Geary Street to St. Mark’s Lutheran Church for an evening concert of seasonal music by the San Francisco Choral Artists?

That’s what I did on Saturday. The brightly lit, shining white Romanesque-revival interior of St. Mark’s made a delightfully apposite setting for a repertoire largely of Renaissance-era Italian music. The acoustics were as bright and shining as the lighting. The 21-member chorus was just fantastically good, and so was the four-man Renaissance wind band The Whole Noyse, which shared the stage.

When singing a Renaissance or Baroque piece unaccompanied, of which they did five, by as many different composers, the choir was uniformly strong, with a highly textured sound. Artistic Director Magen Solomon leads with more emphasis on a fluid flow of music than on rhythmic pulse. The divided choir in O Jesu mi dulcissime by Giovanni Gabrieli was most impressive in this category. By layering and repeating, it built up a mighty wall of sound. Continuing the dulcissime theme, Ave dulcissima Maria by Don Carlo Gesualdo was surprisingly sweet, at least by that composer’s astringent standards. Tribus miraculis by Luca Marenzio, unusually for an antiphon, gets simpler as it goes along.

Quem vidistis pastores? by Giovanni Maria Nanino is a responsory notable for its overlapping polyphony and for a section remarkably reminiscent of the verse from Thomas Arne’s Rule, Britannia!, which wouldn’t be written for another century and a half. Finally, Cantate Domino by Giuseppe Ottavio Pitoni, the most fully Baroque of a Renaissance selection of works, completed this category of the program.

The Whole Noyse joined the chorus for several pieces. In two of these, works for double chorus by Giovannni Croce and Giovanni Bassano, the instrumentalists accompanied one of the two choruses, leaving the other singing alone. In the Croce, another setting of the same text as the Gabrieli, the accompanied chorus was merely a quartet. How audible the singers in this were over the instruments probably depended on where the listener was sitting. From close to their end of the “stage,” I could make them out fairly well. In both pieces, the contrast between the accompanied and unaccompanied singers worked better than in the fully accompanied single chorus of Giovanni Paolo Cima’s Hodie Christus natus est.

Recorders, shawms, gitterns, and a slide trumpet also made appearances. All these instruments produced full-bodied sound with the jolly roughness typical of the best Renaissance wind-band music.

There was a good helping of canzoni and other instrumental pieces for The Whole Noyse to play, by Girolamo Frescobaldi and other, lesser-known composers. The usual disposition of the four instrumentalists was two sackbuts (early trombones) and a curtal (ancestor of the bassoon), led by Stephen Escher on the cornetto, a hybrid instrument with the mouthpiece and sound of a brass instrument and the fingerholes of a woodwind. Recorders, shawms, gitterns, and a slide trumpet also made appearances. All these instruments produced full-bodied sound with the jolly roughness typical of the best Renaissance wind-band music.

There was more. Unaccompanied, the chorus took on Italian music from more recent times: the unusual harmonies of Giuseppe Verdi’s choral Ave Maria; the word-painting of Ildebrando Pizzetti’s Cade la sera, with a striking emphasis on the word stormier (to rustle); and the intricate weaving and clashing of four Transylvanian folk songs set by Roman Vlad, a modern Italian composer of Romanian birth.

Lastly, the concert included new works by the Choral Artists’ Composer in Residence and its Composer Not in Residence of the year, Benjamin Taylor and Kala Pierson, respectively. As their titles imply, Taylor was present for the concert and Pierson was not. Although neither is Italian, both did their best to evoke simultaneously the Italian, the seasonal, and the venerable, for their intriguing new compositions.

Although neither Taylor or Pierson is Italian, both did their best to evoke simultaneously the Italian, the seasonal, and the venerable, for their intriguing new compositions.

Pierson, cheekily, chose an ancient Roman solar hymn in Latin to celebrate the solstice for her Sol Invictus. Every time the chorus repeated the title phrase, it came out in a massive dissonant chord, throwing out a wall of sound like a modern-day Gabrieli. The verses were set as something resembling plainchant, only with more chromatic and sliding notes than are typical of that species.

Taylor’s Miracle Nature was a more elaborate proposition. The composer sets the women of the chorus to singing G.P. Palestrina’s motet Alma Redemptoris Mater as a slow cantus underneath the men quietly chattering away, like the punching of a telegraph key or the plucking of a guitar, with words in English translating the key lines of Palestina’s original, praising the miracle of the Virgin’s being the mother of her own Creator.

Last, as a sort of encore sweetmeat, though listed on the program, was Taylor’s arrangement for unaccompanied choir of an old Lou Monte novelty song, Dominick the Donkey, who helps Santa deliver presents “because the reindeer cannot climb the hills of Italy.” It was an inevitable choice, given the Italian Christmas theme, I suppose. And it was a clever arrangement, as brilliantly sung by the choir as everything else, and with more hee-haws than five Mendelssohn Midsummer Night’s Dream overtures.