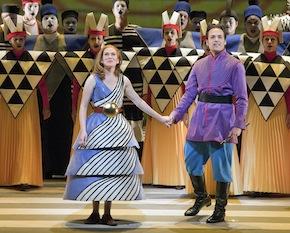 No YouTube clip can possibly prepare you for the wonders of the new San Francisco Opera co-production of Mozart’s The Magic Flute, designed by Jun Kaneko and directed by Harry Silverstein. Powered by four 20,000-watt projectors behind the set, another four, more modest 8000-watt behemoths in the front, and a brilliant mind, Kaneko’s constantly changing, marvelously illumined animations, together with his joyously fanciful sets and costumes create an alternate universe of wonder and delight that bathes the darkest of intentions in golden light.

Even Bay Area residents long familiar with David Hockney’s brightly colored sets may find themselves unprepared for the joyful innocence of Kaneko’s multi-dimensional wonders. What makes his animations so enrapturing, besides their colors and shapes, is that their frequent metamorphoses are timed with the music. Initially prepared to synch with Colin Davis’ classic recording of the opera, then re-timed to work with debut conductor Rory Macdonald’s conception, they never once distract from the music, let alone upstage the singers.

Kaneko’s work may not be grounded in opera, but he has taken the music and message of The Magic Flute to heart. His production reflects a thorough embrace of Mozart’s genius, and treats every element of his sublime creation with the utmost respect. Kaneko’s dragon and other creatures offer delight after delight. The sets themselves were beautiful; I was especially impressed by Sarastro’s temple.

General Director David Gockley’s English-language translation of Emanuel Schikaneder’s German libretto is another strength of the production. Gockley strives less for literalism than for contemporary relevance. Occasionally he overdoes things — his use of the term “boy toy” seems more gratuitous than appropriate, for example — but his frequently spot-on colloquialisms and modern-day references remove a primary impediment to enjoyment, and allow you to devote all your attention to the production and singing.

Three artists seemed nigh perfect on opening night: baritone Nathan Gunn as the “everyman” bird-catcher Papageno; soprano Nadine Sierra as his ultimate mate, Papagena; and Albina Shagimuratova, an astounding Queen of the Night. In addition to Gunn’s physical dexterity, pleasing looks, and buoyant spirit, his voice sounds totally natural, direct, and unadorned. He isn’t striving to be anything; he just is. But his approach to consonants and vowels, and his impeccable singing line reflect a supreme understanding of Mozartian style.

Shagimuratova is simply breathtaking. Forceful and vehement in her lower range, she is remarkably, strong, focused, and spot on as she ascends to a high F above high C. She may not sound vengeful in the stratosphere, but she produces the Queen’s highest notes with a round, glowing brilliance you will be lucky to experience again in your lifetime. You absolutely must hear her.

Papagena has precious little opportunity to sing in her “real” voice. Nonetheless, Sierra made something out of her every moment onstage. Her physical freedom was ideal, her squeaky voice so perfect that it sounded as if produced by a piped-in child, and her unmasked Papagena voice as fresh and unfettered as Gunn’s Papageno. Talk about birds of a feather…

Tenor Alek Shrader, the former Adler Fellow whose win at the Metropolitan Opera National Council Auditions played a central role in the film The Audition, sang Tamino despite a cold. As beautiful and intact as his voiced sounded, it is impossible to say whether the ultimate purity that is the mark of a great Tamino, and which eluded him on opening night, is within his grasp. Nonetheless, his youthful countenance and convincing ardor made their mark.

As Pamina, soprano Heidi Stober sounded best at the top of her range. Elsewhere, her tendency to fatten her sound by emphasizing undertones robbed the voice of requisite purity and made her sound far more mature than her character. Kristinn Sigmundsson’s ever-dignified Sarastro boomed out magnificently over the rest of the cast higher in his range, but was somewhat tremulous in the crucial bottom region (which is very low).

For someone who, according to his bio, seems to be making a cottage industry out of Monostatos, Greg Fedderly seemed more cartoonish than threatening. The Three Ladies all sang wonderfully, but First Lady Melody Moore’s tendency to dominate, combined with Third Lady Renée Tatum’s lower volume, robbed the trio of the plush unanimity of voice that it needs.

Macdonald began the overture at an almost leaden pace, but picked things up soon thereafter. As apt as most of his tempos seemed — I would have liked slower pacing for Pamina’s “Ach, ich fühl’s” and “In diesen heil’gen Hallen” — he sometimes drowned out singers at lower volume, and seemed unconcerned with trying to emulate the transparency of period instruments. Smoother singing from the male chorus in “O Isis und Osiris” was also wanted.

Regardless, you cannot ask for more from the production itself. If any single night of theater can convince that the world can indeed be transformed through music and song, this collaboration between Kaneko, Silverstein, Gockley, and Mozart is it. Prepare to be enchanted.