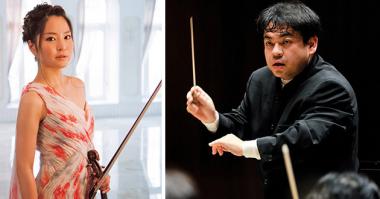 Symphony Silicon Valley has seemed cautious about attempting really long works. The San Jose orchestra has played Beethoven’s Ninth, but few other works bigger than the average large symphony and, for instance, has never played any Mahler symphonies.

So how about some Bruckner?

SSV made its first attempt on that late 19th-century Austrian’s wide-spanning, organ-like compositions with his Symphony No. 4 in E-flat, the “Romantic,” at the California Theatre on Saturday.

It’s Bruckner’s most popular work and a good choice to begin with. And to conduct, the orchestra had visiting maestro Tatsuya Shimono, who had such success here previously with Strauss’s Ein Heldenleben, another late-Romantic, bigger-than-normal work.

It took a while for this performance to warm up. The musicians were initially stiff and halting, without fluidity. Shimono didn’t help matters by taking the entire opening paragraph up to the first tutti as if it were a slow introduction to the rest — a decision at odds with the structure of the piece.

After that, though, things improved rapidly. By the middle of the first movement, this was a magically adept Bruckner concert, and it stayed that way through to the last note.

Bruckner’s compositions work by building up repetitions, so musicians have to put movement in their playing if the music isn’t going to seem totally static.

This performance had that drive, which was especially audible in the Andante. Even the opening pulse from the cellos and basses ensured the thrust would never lag.

There were also some wonderful and unexpected sounds in this performance — aspects of Bruckner not often heard. Who would have thought the old symphony had so much clarinet in it? The great brass chorales were soft and pillowy. This was the doing of the French horns, which achieved a finely blended sound. Yet they, too, along with the heavy brass, could deliver heroics. The mighty, swinging horn call at the end of the first movement erased all trace of the tentative, stiff beginning.

All the parts of the orchestra were in truly fine form, including the strings, which had a rich depth. Shimon appropriately had each string section stand up separately to take a bow, a degree of recognition not often given strings at concerts. The viola section was the first to stand, and deserved it most. Their exposed rendition of the big theme in the andante was flawless.

Yes, there were imperfections in the playing here and there. These were, however, gratifyingly rare and not, after the opening, at all disfiguring.

Closing with such a long symphony required that the opening portion of the evening’s program contain only one work. This was Mozart’s last and finest full-length violin concerto, K. 219 in A Major, known as the “Turkish” for a touch of janissary music in the finale.

It’s a fairly short work that seemed longer because it was so rhapsodic. Mozart compositions can contain some of the same repetition traps as Bruckner’s. But the SSV orchestra under Shimono was in command of these, and never dull, with little bouncing emphases that kept the music lively.

There were also some wonderful and unexpected sounds in this performance — aspects of Bruckner not often heard. Who would have thought the old symphony had so much clarinet in it?

Soloist Mayuko Kamio traded in the weird moaning tone she used here previously in the Tchaikovsky concerto for a lighter, nasal sound faintly reminiscent of the style of Joseph Joachim, the great virtuoso who once owned her Stradivarius. Her tone could get rougher and strongly cutting in lower passages. There was an affecting quality to little catching stutters as her bow hit the strings for some aggressive openings.

What made this performance fine was not Kamio’s sound quality but her phrasing. Especially in the Adagio, the sophisticated caress she gave to Mozart’s deceptively simple-looking melodic line was heart-warming while still well within the bounds of civilized restraint. The solo seemed to go on a long time: It could have gone on longer.

The Mozart piece proved to be merely the curtain-raiser for Kamio’s absolutely hair-raising encore: It seems that the mid-19th-century violin virtuoso Heinrich Wilhelm Ernst had the brash idea of arranging Schubert’s dark and anguished song Der Erlkönig for a solo violin, with the piano’s right-hand rattling quaver, the creepy left-hand motives, and the four characters expressed in the vocal part all packed into one violin. Ernst must have been slightly insane to try it. Quadruple stops are frequent.

I had never heard this piece before, probably because hardly anybody else could play it, certainly not as Kamio could.

Kamio tore into this little showstopper with vigorous sawing, unceasing energy, and the darkest and fiercest tones at her command. It was an awesome middle to a first-rate concert.