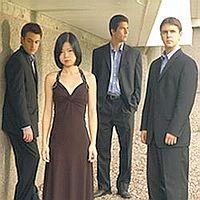 David Bratman on September 30, 2008
In its three years of existence, the Escher String Quartet has built a reputation as a highly intellectual ensemble of mechanical perfection but one that, at its worst, plays aridly without genuine emotion. However accurate that portrait may be, the quartet indulged that reputation when selecting the program for its concert on Sunday at Le Petit Trianon, in the San Jose Chamber Music Society concert series. All four works feature a fugue, that famously intellectually arid compositional form, in their finales. The least-known composer on the program was Alexander Zemlinsky, an early 20th-century Austrian whose works have slowly been brought out of storage in the last couple of decades. Zemlinsky was a strong Expressionist composer, but by the time he wrote his Quartet No. 4, in 1936, he had reined in his earlier vehemence. The quite deliberate result is that each of its six short movements feels like a passionate emotion trying to thrash around while locked up in a tiny wooden box.

The Escher Quartet emphasized the restraint in this work. Some passion could not be repressed, though each movement proceeded on a relatively even level. With some exceptions — for instance, the violins glimmering in the Intermezzo —little emphasis was placed on the composer's special effects. Yet it was not a tedious or ineffective performance, and it offered an interesting introduction to this composer. Dmitri Shostakovich's Quartet No. 7 bears some similarity to the Zemlinsky. The briefest of his quartets, it was written in 1960 in response to his first wife's death but expresses this more as a wry grimace than in a cry of pain. In contrast with the previous work, here the Escher Quartet brought out all the hard emotion there was to be had. The performance was full of dynamic surprises, sudden surges, tiny metallic staccato notes, and even more vehemence in the finale's fugue than before. This small package contained a lot.

To balance the two modern works, we had two of the classics. Mozart's Quartet in G (K. 387) is the first of the set of six that he dedicated to Joseph Haydn. The Escher Quartet responded to the seriousness and ambition in this composition by giving it an extremely dark, heavy rendition. This totally canceled out Mozart's characteristic sweetness and damped down the large-scale dynamic contrast, though the players strongly leaned in to their phrases and gave full value to the offbeat accents in the Minuet. The price of this interpretation, however, is that the Minuet sounded no different from its trio, which is intended to be much heavier. Although it was somber and precise, the Mozart did not sacrifice lyric expressiveness. Character was provided largely by subtle tempo variations, notably in the flow suddenly taking off at an imitative passage in the first-movement development. The tiniest slowing up at the Haydnesque false ending in the finale fooled almost the entire audience into applauding at the wrong spot, drowning out the real, quieter ending. After that, was anyone expecting Beethoven's Third Razumovsky Quartet, Op. 59, No. 3, to be light and speedy? It was. The ensemble cascaded headlong through the first movement and the finale, even taking the Andante con moto relatively fast, thus showing to better advantage the spots where they did slow up. Here, especially in the Andante, were the tender moments that had been missing from the Mozart. And Beethoven's fugue, like all the others, showed that form as a dramatic force and not an academic exercise. Another similarity is that all four works performed give each player plenty of opportunity for solo passages. Violist Pierre Lapointe and, to a lesser extent, cellist Andrew Janss frequently opt for unresonant, even nasal sounds. The two violinists, Adam Barnett-Hart and Wu Jie, play with a mellower effect, but their tones are so similar — possibly because they are now both playing modern instruments from the same violin-maker — that when they pass phrases back and forth contrast is undesirably absent. This was, as I had hoped, a most interesting program. The Escher Quartet's style in the Mozart work may not have been to everyone's taste, though it appealed to mine, and the Beethoven dazzled even if it did not strike the depths. The Quartet made good cases for Shostakovich, and to a lesser extent Zemlinsky, as characteristic voices of the anxious 20th century.