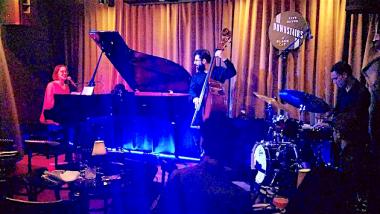 On the opening night of her four-night stay at the Black Cat, vocalist/pianist Kelly Green proved she was hip enough both to deliver jazz comic material like Dave Frishberg and Bob Dorough’s 1966 hit, “I’m Hip” and to command the attention of those chatty hipsters and millennials who come to the suave Tenderloin boite more for social than for musical purposes.

Green is relatively new to big-league jazz — her debut, self-produced album, Life Rearranged, was on display against the lid prop of the venue’s baby grand — but her song list, filling up to four sets a night, ranged from prewar Broadway to a post-bop outing by her onetime mentor, Mulgrew Miller, and her own austere, postmodern originals. Educated at the University of North Florida and William Paterson University (from which she graduated in 2014), Green has culled support and admiration from the latter’s faculty member Cecil Bridgewater, as well as bassist Christian McBride, who appears on her album.

Squired by bassist Alex Tremblay and drummer Evan Hyde, both contemporaries, Green sounded and looked best to my ears and eyes as the funny girl next door, garbed in an alluring Parisian outfit from Kate Spade (for whom she’d played at a fashion show) but eager to clamber over the fourth wall in the goal of celebrating and sharing her material. Her voice was girlishly airy, with little vibrato and a canny way of channeling, not imitating, some of her vocalist idols, including Blossom Dearie (who first recorded “I’m Hip”) and Billie Holiday. Green’s delivery of Lady Day’s “Ghost of a Chance” inspired one among a bourgeoning bunch of attentive fans to yell out, “Sing that song, sing that song!” For “It Might As Well Be Spring,” Green seemed almost to borrow the chirrup of the robin, with an effect both charming and humorous.

The fun extended into Green’s piano solos, which also proved dexterous (she somehow managed hand signals to the venue’s wandering sound mixer man while executing a prestissimo solo on Cole Porter’s “It’s All Right With Me”) and displayed her awesome physical strength -- her block open fourths on her own ecological plea, “Daily Lies,” evoked the dynamism of McCoy Tyner.

I’d noted during the warmup to the first set, that the level of Green’s mic seemed low for her breathy style and her natural, clipped enunciation. Alas, this never got corrected, making it at times difficult to get the lyrics, particularly when drummer Hyde was at full throttle. On the album, which features several songs heard at the Black Cat, along with fascinating interstitial subway sounds (Green has been living in Harlem for three-and-a-half years), everything is delightfully discernible.

As with the singer herself, the trio showed best and brightest in particular portions of their varied repertoire. Tremblay, soloing, elicited conversational phrasing from his bass on “I Didn’t Know What Time It Was,” and sounded the instrument’s lyricism for “The End of the Love Affair.” While Green worked a modern tickle into Fats Waller’s “Honeysuckle Rose,” Hyde showcased the tonal potential of his drum kit, as well as fascinating polyrhythmic patterns, before reverting to orthodox and lusty boogie behind Green’s healthy stride. Among her many talents, Green comped sensitively behind her bandmates, with whom she’s been touring for most of the last year and will be recording her first trio album soon.

You’ll want to sit up close and enjoy one of the Black Cat’s specialty cocktails, such as the New Antidote (a smoky mixture of mezcal, scotch, and lemon), as you savor intimately Green’s uniquely engaging and unaffected performance style. Her love of music-making and of her audience is as warmly undeniable as it is rare in this hypercompetitive digital age. For her final set Tuesday, Green invited in such Bay Area colleagues as vocalist Amy Dabalos (with whom she shared the lyrics of Irving Berlin’s “Cheek to Cheek”) for a jam like those she hosts weekly back on the Upper West Side, at Cleopatra’s Needle. Not surprisingly, Green is also sharing the love with the next generation as a mentor in the Jazz House Kids program, established by Christian McBride and his vocalist wife Melissa Walker and based across the Hudson in Montclair, New Jersey.

Fritz Quattlebaum, the Black Cat’s founder and co-owner, is to be commended for importing to San Francisco his experience with swank New York venues, as well as a series of jazz entertainers better known in the Big Apple. Though he professes to be looking toward the “next thing” in jazz, we hope that he’ll continue to bring us some of the good things jazz has already generated, so freshly showcased by Kelly Green.

Kelly Green and her trio appear at the Black Cat through April 20.