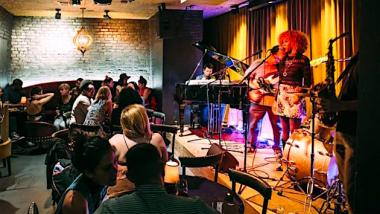 With more than 300 concerts on the calender for the 2017–2018 season, SFJAZZ is far and away the dominant jazz presenter in the Bay Area. But as in most artistic endeavors, diversity is a boon when it comes to creativity, and the region offers dozens of other (albeit lower-profile) spaces to experience the music up close and personal.

Strangely, San Francisco’s most important SFJAZZ alternative seems content to remain on the downlow, quietly presenting some of jazz’s most exciting young artists with a minimum of publicity. Located in the heart of the Tenderloin, the Black Cat is proudly old-school. The downstairs music room has the feel of a speakeasy, complete with well-dressed audiences who often seem more interested in each other than the musicians on the bandstand.

Last Saturday, the conspicously attractive staff was decked out in Halloween costumes, as were many of the patrons, adding to the room’s typically convival vibe. On stage, Detroit saxophonist De’Sean Jones and Los Angeles vibraphonist Chase Jackson led the rip-roaring collective sextet KNMDK (Knowmadik) through a set of hip-hop inflected jazz funk, joined on occasion by Oakland sculptor and expert freestyle rapper Gavin Grant.

It was the second show of a five-night run for KNMDK, the kind of opportunity to settle into a room that’s almost disappeared in the Bay Area (and just about everywhere else). And KNMDK’s residency is hardly an exception at the Black Cat.

The club has forged strong ties to some of the most interesting young players on the scene, like New York trumpeter Theo Croker, who’s played several extended Black Cat runs in the past two years. In an era when musicians struggle mightly for out-of-town gigs, the Black Cat has become a verdant oasis, presenting emerging artists like vocalist Sami Stevens, saxophonist Ken Fowser, Israeli bassist Or Bareket, Chilean guitarist/vocalist Camila Meza, and pianist Emmet Cohen for multinight engagements.

The club isn’t neglecting Bay Area artists either. Various ensembles affiliated with the Jazz Mafia, the expansive umbrella of players arrayed around trombonist/bassist Adam Theis, are a regular presence at the Black Cat, as are the great jazz and blues vocalist Denise Perrier, trumpeter Geechi Taylor, pianist Walter Earl, and many other top-shelf Bay Area artists in jazz and beyond. The booking policy is relatively wide open, with straight ahead jazz, jazz funk, jazz rock, R&B-inflected vocalists, hip-hop jazz, and soul jazz organ combos all thrown into the mix.

Word about Black Cat gigs tends to spread via the musicians on social media, which means it is all too easy to miss an opportunity to see a treasured player or an artist generating a serious buzz. But the Black Cat is hardly the only venue that is less than vigorous about promoting shows. One trick to finding the best jazz gigs is knowing that the music bubbles up in all kinds of unlikely spaces, from pubs and cafés to books stores and instrument shops.

Over more than three decades, Berkeley High School’s innovative jazz program has churned out talented amateur players as well as many professionals.