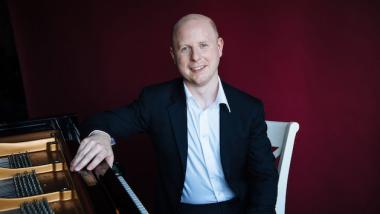 Keyboard Magic in Black and White

A new keyboard program has made its debut at San Francisco’s Old First Church. The New Piano Collective, founded and directed by Jeffrey LaDeur, gave the second and more unusual of its two inaugural concerts on Sunday, August 14, under the auspices of Old First Concerts.

The concert theme was “Black and White Magic.” For three of the four pianists performing, it would be appropriate to say that “black and white” means all of the keys, not just those in one simple tonality. Their music was awash in exotic harmonies. “Magic” could be taken to allude to a light touch of the fingers. While there was loud, even percussive music in this section of the concert, for the most part it was wispy, reserved, and often impressionistic.

LaDeur began his set by expounding a theory that Debussy’s Images, Book 1, is not only an homage to Jean-Philippe Rameau, as acknowledged in one of its movement titles, but encodes both Rameau’s name in musical notes and the plot of his opera Castor et Pollux in its structure. That, said LaDeur, is compositional magic. He proceeded to play his own transcription of Rameau’s tragic aria “Tristes Apprêts” along with the Debussy, emphasizing the tangy harmonies in both works with lightly glowing sound. Even the final movement of the Debussy, faster and livelier than the rest, came out as gentle, warm, and fuzzy.

Jiyang Chen played a set of varied transcriptions, including songs and instrumental pieces by Tchaikovsky and Rachmaninoff, in a more emotionally open style, full of lavish harmonic touches and the gentlest possible rolls. His humid harmonies and relaxed, arrhythmic playing put me in mind of late-evening lounge pianism. That was, perhaps, a different kind of magic.

Paul Sánchez, making his San Francisco debut, played a little differently. His magic was the Cants Mágics by Federico Mompou, an early 20th-century Catalan composer who took impressionism to the nth degree of evanescence. The score often lacks precise note values and almost entirely omits bar lines. Sánchez took this slow, tenuously airy music and squeezed out the slight contrasts it could provide. He found coherent melodic flow, and worked to build up and then discharge small reserves of energy. What could have entirely vanished in thin air instead left a firm imprint.

Sánchez followed this with Liszt’s Ballade No. 2. One of Liszt’s punchy concert showpieces, it yet has many quiet, tender passages. Sánchez built up the energy here as well, reaching an extreme with the opening theme, whose accompanying left-hand rumble pulsed like a motorcycle engine racing.

Though each of these pianists had a distinctive manner, they all applied themselves to similar music. They had different ways of looking at the same object. Each played his set as a flowing, single entity, with hardly perceptible breaks between pieces.

The fourth pianist did something completely different. Igor Lipinski, also making his San Francisco debut, gave a program he calls “Piano Illusions,” offering magic in the form of prestidigitation tricks. Having flipped through a shuffled deck of cards, he called them out one by one in order while playing a Bach fugue. He asked audience members to pick cards, converted their choices into a theme, played it in varying styles, then turned it upside down, converted it into Mozart's Turkish Rondo from the Piano Sonata in A Major, K.331, and played that as ragtime. He played Chopin’s Minute Waltz blindfolded, peeking out to hit that high F.

Not only did Lipinski give a variety show, he played louder and more heavily built music than the others, and did so in an extroverted, galumphing style. It was silly, it was fun, it was even a little educational, but it hardly came from the same program. Pianists playing in succession don’t have the inherent unity of a chamber music collective, and the New Piano Collective should decide whether it wants to put on a potpourri or a unified concert.