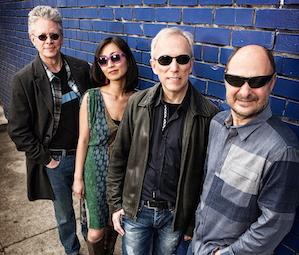 The house lights were off at the Santa Cruz Civic Auditorium during the Kronos Quartet event, Sunday evening’s entry in the Cabrillo Festival of Contemporary Music, and the stage lights were so close and intimate as to cast no larger illumination. A slowly changing light show on the back wall backlit the performers, but outlined nothing else.

Up in the hall’s tiers, the result was a perishingly deep darkness. Without a flashlight, the program book was useless, forcing listeners to rely on violinist David Harrington’s brief and pithy between-works comments to keep track of where they were in a program of largely unfamiliar pieces.

It was a lengthy recital: two hours without an intermission. That’s a long time to sit absorbing strange music with no break to process it all. And it was unsubtly amplified.

What Kronos plays this year may be totally different from what it played five years ago, or will play five years from now, but at any given time its repertoire tends to share resemblances. This year the main recurring theme was chugging rhythms. Yuri Boguinia’s chugging rhythms in On the Wings of Pegasus were more complex than Michael Gordon’s repeating chugging figures in Clouded Yellow.

Guest artist Vân-Ánh Vanessa Võ, an elegantly dressed Vietnamese-American woman with a large hat, set the Kronos players to chugging with gradually increasing energy in her Queen of the Night while she played spiritual melodies in a folk mode on a Vietnamese zither, the đàn tranh. Even Pamela Z, who gets both her rhythms and her melodies in And the Movement of the Tongue by playing recordings of spoken phrases and making the quartet eke the musical qualities out of them, produced some chugging ostinatos.

Another recurring theme was composers who force the musicians to play other instruments. Vō had them playing Vietnamese folk instruments: a long piercing flute, a soft drum, various shaken percussion instruments. Nicole Lizée, whose pastiche tribute to East German 1960s electronic pop music, Death to Kosmische, borrowed its pop rhythms (but without chugging), was more techno. She employed the Stylophone, a smartphone-sized handheld synthesizer played with a stylus; the Omnichord, a kind of electronic autoharp; and a couple of other gadgets not mentioned in the program notes.

The section of Lizée’s work in which cellist Sunny Yang strummed the Omnichord was the most attractive part of the piece. It was matched by a brief Vietnamese folk song in which Vō repeatedly ran delightful falling scales down the strings of her zither. These runs of tinkling notes were the most appealing recurring theme.

The oddest was a weird, wailing sound high in the violins, vibratoless and affectless, completely chromatic and sounding detached from any known scale, that would drop pitch in an eerie, sidling manner. Pamela Z employed this in one section of her work, and it formed a major feature of Gordon’s Clouded Yellow, where it kept reappearing in the refrain of the piece’s rondo form. For Gordon, it represents butterflies. (They sound like creepy, evil butterflies to me.) If this technique is a regular feature of contemporary composition, it’s one I do not know. The only referent for it that came to mind was the disconcerting music accompanying the scene in Star Trek where Captain Kirk discovers that the tribbles are eating his lunch.

The music that Kronos extracts from the rhythms and pitches and plays underneath gave a contextual feel, like movie music.

Two brief pieces on the program had a chance of being familiar outside a contemporary music (or Vietnamese folk) context. One was, of all things, the Prelude from Wagner’s Tristan und Isolde. In an arrangement by Aleksandra Vrebalov, it sounded intimate and gentle, like the Siegfried Idyll. Following it, to disconcert Wagner’s ghost as much as possible, came a Jewish cantorial hymn, Sim Sholom. Judith Berkson’s arrangement gave the cantor’s solo to Yang, who did not sound very cantorial to me, with the others as the choir making only brief interjections.

The pieces were all fairly short, about 10 minutes, except for Pamela Z’s concluding work, which lasted more than half an hour and was divided into 12 brief movements. It would have been more enjoyable were it not at the end of a long, unbroken slog, or if Harrington had mentioned (or I’d remembered from or been able to read in the program book) how many movements there were.

As it was, it was enjoyable enough. The composer had collected voices, including those of five past and present members of Kronos, speaking phrases and words in a variety of American and foreign-inflected accents, and she patched them together in recordings. The music that Kronos extracts from the rhythms and pitches and plays underneath gave a contextual feel, like movie music, while the main interest, and a large amount of wit, remained in listening to the words. As also with Lizée’s electronics, the quartet players on their string instruments felt almost but not quite superfluous to the show.

Then they played a Jimi Hendrix song for an encore, with as much squealing, and even feedback sounds, as Hendrix himself gave, and it was clear they’re not superfluous at all. They’re entirely vital to the music, and they’re the reason for the show.