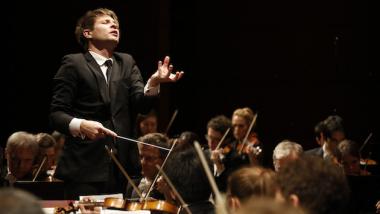 Famous conductors are rarely young. When a new name does make a splash, much of the ensuing conversation concerns one judgment: worth the hype, or not?

Krzysztof Urbański returned to San Francisco Symphony last weekend after having appeared with some of the world’s most famous orchestras, including the Berlin Philharmonic and the London Symphony Orchestra (he’s currently with the Indianapolis Symphony Orchestra). He led Sunday’s performance to many high places, but it was the violin soloist, also young and tremendously successful, who was truly remarkable. Augustin Hadelich played the finest Mendelssohn Concerto I’ve heard live, the highlight of a program that also featured Shostakovich and Penderecki.

From his first notes, Hadelich’s performance could be classified as first-rate. His tone was beautiful and his intonation was so flawless that, in the double-stopped Paganini encore, I could hear the difference-tones all the way from row R. He has devised some interesting technical solutions, which I hope he makes public. (Hadelich is a rare performer who has not only written some of his own cadenzas, but also transcribed them for free use).

But Hadelich’s interpretative solutions were the takeaway. Mendelssohn completed the concerto in 1844, so it must be classified as a romantic work, yet its melodies often require the kind of purity that could be associated with Mozart. In fact, Hadelich played up the classicism of the first theme, which he treated with light strokes and simple bowings. The second theme, then, seemed to transport the work through time: his newly concentrated sound, luxurious in feel, carried through the rest of the movement.

An unhurried tempo allowed him to give the running eighth-note passages a unique melodicism. I sometimes questioned why he lingered on each repeating sequence, and the Andante initially seemed a trifle slow. But within this tempo he moved with great freedom, holding high the energy from the passionate middle section through the reprise. The finale was light yet full of spark.

The orchestra’s accompaniment, which in such a cornerstone could so easily be perfunctory, was always well characterized. Shostakovich’s Symphony No. 10, however, was sometimes aimless. Again, Urbański drew a beautiful collective sound out of the group, which is no small task, and some sections (the finale’s Allegro, in particular) were magnificent. Many of the solos were superb: the duo of clarinets Carey Bell and David Neuman, concertmaster Alexander Barantschik, and especially, oboist Eugene Izotov. But other sections seemed lacking in vision.

It’s difficult to judge a conductor from the outside. Urbański appeared obviously competent, conducting ahead of the beat in a style that shouldn’t be new for the SFS musicians, yet communication sometimes seemed faulty. On Sunday, several major chord changes were egregiously not together, which I wouldn’t expect from a group of such high-caliber performers. Tempo fluidity that worked beautifully in the Mendelssohn here felt shaky: in the Allegro, offbeats pulled away from the theme, and the busy embellished melodies that dazzled in the winds seemed uncomfortably expansive when transferred to the strings. As is true of so many Shostakovich works, Symphony No. 10 is ambiguous in origin and meaning. Urbański’s case, though successful in places, felt scattered.

In Threnody for the Victims of Hiroshima, however, Urbański used ambiguity to his advantage. Audience members have been trained to hear the terrors of the atomic bomb in the work for string orchestra, but Penderecki did not write it as a response to the war, and the original title was simply 8’37” — the duration.

Under Urbański’s direction, the performance had a refreshing pureness. The expert balance was especially noticeable in the dense cluster chords, and individuals played with such lightness that the orchestra became a slightly overgrown chamber ensemble — delicate and often very pretty.

Correction: An earlier title for this piece could have been misconstrued as referring to Augustin Hadelich's boyhood injury. The mistake was inadvertent, and we apologize for any offense it may have caused.

Before making his S.F. Symphony debut, Augustin Hadelich talks about his musical upbringing in Italy with German parents, how he prepares for performance, and where he finds his extraordinary instruments.