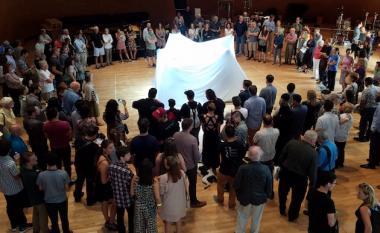 It started with the ringing of bells and 12 hours later it ended with the ringing of bells. In between, “Noon to Midnight,” coordinated by the Los Angeles Philharmonic’s Green Umbrella series, featured 18 concerts in multiple locations of the Walt Disney Concert Hall including 12 world premieres and 16 different organizations and performing ensembles. The number of notes played? Beyond reckoning.

Los Angeles has been a significant center for new music dating back to the years before World War II when Evenings on the Roof presented major premieres (by John Cage, Charles Ives, and later Pierre Boulez, among others). Igor Stravinsky was local talent and the Los Angeles Philharmonic introduced its New Music Group (founded by William Kraft), which evolved into the Green Umbrella in the 1980s and was given a boost by Esa-Pekka Salonen’s tenure as music director of the orchestra and John Adams and Steven Stucky as new music advisors.

But in recent years the new music scene in Los Angeles has exploded to include a city-wide network of organizations and instrumental ensembles. And, unlike most other, major symphonic organizations in the U.S., which have all but abdicated their responsibility to explore the contemporary world, the L.A. Philharmonic has positioned itself at the center of the city’s vital, new music life.

Which brings us to “Noon to Midnight.”

“What an amazing day,” said John Adams as he took the stage to conduct the featured 8 p.m. concert, “Four World Premieres.” “And it’s not over yet. I conducted my first Green Umbrella concert in 1988. And today, I think it’s safe to say, we’ve reached critical mass!”

The day began with the inauguration of a billowing art/music installation piece called Nimbus. Conceived by Yuval Sharon (founder of The Industry), composer Rand Steiger and design/ fabricators Patrick Shearn, Ed Carlson, and Danielle Kaufman, it consists of a series of luminous color-shifting clouds suspended in the grand escalator approach to Disney Hall. Steiger’s minimalist score (recorded by members of the Philharmonic) provides the musical atmosphere.

However, for the premiere a phalanx of wandering bell-ringing and singing performers offered an added accompaniment. The installation will remain up for at least a year and is free.

Before the opening tintinnabulations had faded away the audience had already dispersed and moved to the large space known as the BP Hall. At the center of the floor they encountered what appeared to be a white tent with some rather odd protuberances at the corners. This was Porcupine for tent, quintet, bows and elbows by composer Veronika Krausas and artist Ana Prvacki.

Reminiscent of Martha Graham’s cocoon dances, the members of the L.A. Phil. Bass Quintet performed Krausas’ thorny piece as their instruments, bows, and occasionally hands made improvisational indentations in the fabric. It set a tone of adventure and discovery for what was to follow.

By design, like the Bay Area’s Garden of Memory, it was impossible to take in all of the continuously overlapping performances. You had to make choices: did you want to hear a complete outdoor performance of Olivier Messiaen’s Catalogue d’oiseaux performed by Piano Spheres or the first of two concerts by the new music ensemble, wild Up? Did you want to hear a diverse concert by gnarwhallaby or the St. Lawrence String Quartet perform Samuel Adams’s rapturously beautiful String Quartet in Five Movements followed by four romps from John’s Book of Alleged Dances, by John, Sam’s dad.

I chose the wild Up program because it featured four premieres by members of National Composers Intensive Program, the outcome of a multiday composing workshop overseen by wild Up conductor Christopher Rountree and composer (and USC music school faculty member) Andrew Norman. The pieces included Katherine Balch’s, Una Corda; Ali Can Puskulcu’s, Wired; Tina Tallon’s, sear; and Thomas Kotcheff’s, gone/gone/gone beyond/gone beyond beyond.

While each of the works incorporated individualistic elements of style and instrumentation, the composers all made the case that their music really represented themselves. They are all young, digitally interconnected, and part of the millennial multitasking, social media, information overload culture. They’re used to bouncing from one media input, data stream, tweet, text, and tune to the next. And that sense of a ping-ponging attention span also dominates their musical thinking. It tends to spend a moment here, the next moment there, often in a seemingly incongruous series of contrasting collisions. Any sense of an overriding structure, an element that was so integral to the minimalist movement, is almost nonexistent.

The shock of the new made the shock of the old — in the form of George Antheil’s 1924 score to Fernand Léger’s Dada/Cubist classic Ballet Mécanique —  more powerful than ever. Performed by members of the USC Percussion Ensemble and a cadre of four pianists led by Joanne Pearce Martin and Vicki Ray, the performance, which was accompanied by the Man Ray film, rattled the rafters of Disney Hall with its wild percussive energy.

As the hours, and the notes rolled by, Santa Monica’s own Jacaranda offered a modest world premiere of David Lang’s sleeper’s prayer for boy soprano and organ; Grawemeyer Prize-winner Hans Abrahamsen’s schnee; followed by an energized rendition of Steve Reich’s Eight Lines conducted by Donald Crockett.

As the Los Angeles Percussion Quartet pounded and malleted out their presence in the BP Hall, percussionist Jonathan Hepfer performed a most subtle concerto for string drum, Mani Mono by Pierluigi Billone, presented by the oldest of L.A. new music providers, the Monday Evening Concerts.

But for a real minimal experience you would be hard pressed to top Crickets by Chris Kallmyer. The “piece” consisted of an elegant white box (standing at the center of BP Hall), its interior glowing red, casting its inhabitants, 1000 crickets, into silhouette as a microphone amplified their late summer mating ritual. It was tranquility personified (or insectified).

As the day had progressed the size of the crowds had also increased leading up to the Green Umbrella ticketed concert conducted by Adams. It opened with At a Gray Sky Floating Between the Dirt, by 17-year old Andrew Moses. Intricate in its orchestral interaction and coloration, the piece will best be remembered for Moses’ virtuoso clarinet artistry. At one point, he performed a continuous series of trills that seemed to defy human ability.

In a similar way, Shpgl by the Barcelona composer Oscar Colomina i Bosch will be less remembered for its music for wandering solo violin than for the remarkable 13-year-old “old soul” performer, Marley Erickson, who made it come alive. She may be the next Hilary Hahn. Watch out world, here she comes.

On a day that was filled with memorable music, there was none more moving and beautiful than Flow the most recent (and hopefully not last) sublime composition by Ingram Marshall. As Adams described, “It begins with New England hymnody and then somehow takes a turn to Indonesian gamelan. How can a New Englander like me resist that?” The principal piano part was performed with technical dexterity and a soaring sense of melody by Timo Andres.

I have to admit that by 10:30, when wild Up took the stage for its final concert, my energy tank was running on fumes. And Clara Iannotta’s Troglodyte Angels Clank By with it mechanical groans did not help matters. Luckily, John Adams wonderful romp, Scratchband sent us all out of the hall with big smiles on our faces.

As the witching hour approached, we were each handed a small temple bell for a participatory performance of every noun until any now by Lucky Dragons. What a day! And night!