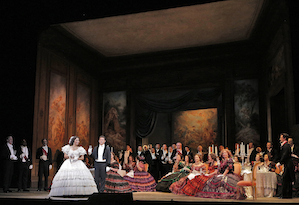 Since 1924, not a decade has passed at the San Francisco Opera without at least one performance of Verdi and Piave’s great opera, La traviata (translated by some, for better or worse, as The Fallen Woman). The 1930s and 1940s saw six productions each in the War Memorial Opera House, and the first decade of the new millennium saw three more.

SFO’s current La traviata, the first in five years, is the Company’s sixth consecutive mounting of John Copley’s attractive, albeit traditional 17-year old production. There are only two reasons for such frequent mountings of the same conception, costumes and sets: unforgettable instrumental and vocal interpretations that grip the heart as though you are hearing the opera’s great music for the first time, and direction that drives the music’s message home.

Thanks to conductor Nicola Luisotti and the superb San Francisco Opera Orchestra, instrumental contributions were frequently revelatory. The diaphanous divided strings at the start of the prelude riveted attention. Building his phrases in sighing arches of tears, Luisotti insured that even when his violins feigned gaiety, the yearning of the lower strings underscored the tragic nature of the story. There wasn’t a routine note in the entire performance.

The singing was often excellent, if rarely on the same exalted level. Soprano Nicole Cabell gave a deeply nuanced performance as Violetta Valéry — the courtesan who parties through the first stages of “consumption” (tuberculosis), opens her heart to love-stricken Alfredo Germont, abandons him at his father’s request, and reunites with her beloved minutes before her demise.

Her sound may lack brilliance, but her coloratura in the great first act aria and cabaletta, “Ah, fors'è lui … Sempre libera” (Ah, perhaps he is the one … Always free), was nonetheless quite fine. Albeit lacking in both the fearless bravura and interpolated high E-flat that many opera goers look forward to, the full-throated manner in which she dispensed the aria, and the nuance she brought to everything she sang, were quite exceptional.

Cabell’s emotional commitment and identification with her character were beyond question. Yet the one thing that was absent from her singing was a voice of tears and sighs and inner fire. Emotional depth is not something a singer can feel her way into; it’s there to begin with, and vocal training allows it to emerge at its communicative best. It’s a quality that, for the most part, Cabell could not summon forth.

The other two leads, tenor Saimir Pirgu (Alfredo) and, in his debut, baritone Vladimir Stoyanov (Alfredo's father, Giorgio Germont), had other issues to deal with. Despite a voice that occasionally bleated, and that faltered on his highest note, Pirgu was especially convincing when expressing anger in the Act 3 party at Flora’s house. Most of the time, however, he seemed to be expertly following the score rather than expressing its emotions from the core of his being.

Stoyanov exhibited a fine voice, strong and even throughout the range, but he sang at virtually the same volume level, and with the same tone, throughout. When Cabell softened masterfully to sing their duet, “Dite alla giovine sì bella e pura” (Tell the young girl, so beautiful and pure), at pianissimo levels, the stoic Stoyanov almost drowned her out. Nor could he summon the ravishing tone that can make his subsequent aria to his son, “Di Provenza il mar, il suol chi dal cor ti cancellò?” (Who erased the sea, the land of Provence from your heart?), so deeply moving.

Where Stoyanov excelled, presumably following Laurie Feldman’s direction, was in wielding his cane and body like a hard-hearted thug. His was one of the least likeable Giorgio Germonts on the planet. Every time he sang that he was doing what God had commanded him to do, his despicable characterization grew in impact.

Smaller roles spotlighted three Adler Fellows. Soprano Erin Johnson (Violetta’s maid, Annina) was ideally convincing in both voice and acting. Baritone Hadleigh Adams (Marquis d’Obigny) moved too well for someone presumably stiff with age, and had little to sing. Mezzo-soprano Zanda Svede, was so beautiful and animated in the opening scene as to almost upstage Cabell, even though the plush beauty of her voice wasn't ideally suited to her role. She could soon score a major triumph in larger part.

On June 17, after just one more performance, tenor Stephen Costello, a sensation in SFO’s Moby Dick, replaces Pirgu as Alfredo Germont. Then, on July 5, for the final four performances of the 10-performance run, his wife, soprano Ailyn Pérez, becomes his Violetta, and baritone Quinn Kelsey his father. At the same time, Resident Conductor Giuseppe Finzi takes over. Given the excellence of production and direction, conducting, and musicianship, it could be a new La traviata all over again.