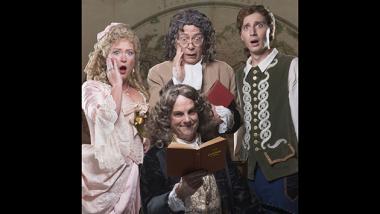 Which is the best of all possible Candides? Leonard Bernstein’s comic operetta exists in four different versions that date between 1956 and 1999 with at least eight different authors contributing and rearranging the lyrics and book along the way. The development of Bernstein’s Candide is just as convoluted as the plot of Voltaire’s novella.

In a welcome change from their usual Gilbert and Sullivan fare, the Lamplighters Music Theatre opened their production of Candide on Friday at the Yerba Buena Center for the Arts. Director Phil Lowery, however, had to navigate what is arguably the most problematic of all possible Candides, the 1999 Royal National Theatre version.

This most-recent incarnation of the operetta is a clunky three-hour reenactment of nearly every episode from the Voltaire. Nearly half a century of re-working and re-editing resulted in a Frankenstein’s monster of a show — a lengthy monologue is added here or a musical number is inserted there, and the seams are apparent.

Lowery embraced this stitched-together nature by focusing on the delightful moment-to-moment details of the piece. Hilarious side gags never came across as hamming for cheap laughs. Big ensemble numbers were treated like individual acts in a vaudeville extravaganza — “I am easily assimilated” looked straight out of an MGM musical and the Auto-da-fé was particularly thrilling to watch in its terrifying mixture of the macabre and the burlesque. In place of myriad set-changes, Melissa Wortman supplied a sumptuous parade of ever-changing costumes for the chorus members as Candide travelled from Germany to Holland, Paris, Iberia, South America, and Venice.

“I am easily assimilated” looked straight out of an MGM musical and the Auto-da-fé was particularly thrilling to watch in its terrifying mixture of the macabre and the burlesque.In the title role, Samuel Faustine brought a great deal of naivety to his candid character — perhaps too much. His constant shrugging and arm flopping were slightly clownish. And while Faustine has a very sweet voice somewhere between a Broadway tenor and an operatic lyric tenor, it lacked the vigor and sheer volume needed to convince us of Candide’s undying devotion to Pangloss’ theory of optimism in numbers like “It must be so.”

Jennifer Ashworth as Cunegonde was a triumph. She was effervescent and supplied just the right amount of camp, calling to mind a young Beverly Sills. While her voice is slightly throaty, it sparkles in her upper-register like the 20-karat earrings her character lusts after in “Glitter and be gay.” Her technique is also crystalline, with diamond-cut precision in the coloratura passages.  What is more, she has the comedic timing and dramatic capabilities of a seasoned actress to match her vocal prowess, making her an ideal operetta prima donna.

Of the smaller cameo roles, which are multitudinous in this version of Candide, Cary Ann Rosko stood out as the feisty and single-buttocked Old Lady. Though not a particularly strong singer she made up for this with a highly original and eccentric take on the character.

Perhaps the strangest aspect of the production, however, was the double role of Baker Peeples as both the conductor and the narrator Voltaire. At several points throughout the production, Peeples effortlessly moved from one role to another — cuing the onstage chamber orchestra during the middle of a monologue, for instance. He even sang some solo passages in the “Ballad of Eldorado,” adding a third level of artistic contribution. Yet this virtuosic piling on of responsibilities wasn’t without purpose; by filling both narrative and directorial roles, Peeples became a kind of “author” of the work’s music and action, just as his character Voltaire was the author of Candide.

Unfortunately, Peeples didn’t have much to work with in the 18-piece chamber orchestra. The ensemble needed to be at least twice as large to get the kind of luscious textures Bernstein wanted. As a result, the iconic overture sounded sparse. The chorus, on the other hand, was obviously well-prepared from performing years of difficult Gilbert and Sullivan repertoire. The big choral numbers, especially  “Make Our Garden Grow,” were the highlights of the evening.

Candide will continue its run on February 13-15 at the Lesher Center for the Arts in Walnut Creek and February 21 and 22 at the Mountain View Center for Performing Arts.