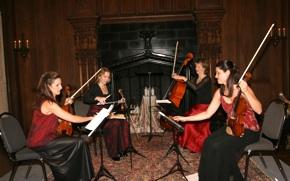 Lark Quartet Does an American Songbook

String quartet concerts customarily feature the old masters, or the medium-old masters, and apologetically stick small quantities of modern music in the corners of the program. At Sunday night’s concert at the Kohl Mansion in Burlingame, though, the opposite plan — feature the contemporary works, and stick the old masters in the corner — was enacted by the Lark Quartet, which now modishly calls itself the “Lark  Quarte+” to announce a commitment to performing with guest artists. True to that pledge, this concert also featured baritone Stephen Salters.

The program featured works by three living American composers, all in a neo-Romantic vein, two of which displayed Salters’ voice. They weren’t song cycles, as you might expect: Each was a fairly large, through-composed narrative work on a gripping, imaginative subject — almost amounting to one-singer chamber operas, as the composers and some critics have suggested.

The better of the two was Song of the Silkie, by Elena Ruehr, setting a poem by Laura Harrington. The silkie, as Kohl’s resident musicologist Kai Christiansen explained before the performance, is a Scottish legend of a seal who comes to shore, temporarily shedding her skin and taking the form of a human woman to mate with a human man. When the silkie inevitably recovers her seal skin she will return to the water, and Harrington and Ruehr tell of the desolate man hunting the sea for his silkie wife. Salters sings both parts, giving the brief, slightly folk-influenced lines of the silkie in falsetto, serving as a kind of chorus between verses of her husband’s pleadings. Salters was appropriately weird and passionate in this piece, over mostly gentle, rocking accompaniment from the Quartet, varied by brighter moments and a long drone from Caroline Stinson’s cello as the husband’s emotions change. While the vocal line is chromatic neo-Romanticism, repeated figures and a harmonic stillness in the strings suggest that Ruehr has learned something from postminimalism.

Theodore Wiprud’s “Scenes” from American Journal was also interesting. The poem here, by Robert Hayden, is a slightly disorienting report on the American national character as supposedly seen by an alien (the kind from outer space). Wiprud has set the entire poem; the “scenes” performed here included about three-fifths of Hayden’s 850-word text. Hayden writes in fragmented phrases, and Salters did a nice job of melding these into a coherent line above Wiprud’s choppy, fluctuating accompaniment. Framed by an imitation radio signal of dry rhythmic patterns, the music moves to a heavy anguish as the alien considers American violence, languidness as he describes a beauty queen, a dissonant semicountry style as he quotes a hopeful barfly, and a held consonance near the end as he confesses that he actually likes the Americans.

Salters’ light-toned baritone, always clearly enunciated, projected enough to fill Kohl’s tiny hall thoroughly. A vocal concert here could get away with a much less powerful singer. Salters put his listener-mesmerizing skills to the real test in his encore, teaching an audience of mostly elderly Hillsborough gentry to sing the chorus response lines in Gershwin’s “It Ain’t Necessarily So” with a modicum of vigor.

A Swoop of Sonorities

The third recent piece, for quartet alone, was by Jennifer Higdon and titled An Exaltation of Larks. It wasn’t named for the performers, though they admitted being attracted to it by the coincidence of nomenclature. “Exaltation” is the term of venery (as in “school of fishes” or “litter of kittens”) for larks. Higdon was intrigued by the phrase and sought to depict the exaltation of larks in all its aspects. While other musical larks — Haydn’s or Vaughan Williams’ — sing, Higdon’s fly. She gives us an energetic composition of swiftly changing moods and irregular emphasis, with rhythmic “flapping” and high-pitched sounds (including many harmonics), all made out of individual notes rather than phrases.

To a listener knowing the title, the resemblance to a flock of birds swooping by — abruptly changing direction, suddenly landing, and then taking off again — is vivid. The sonorities, while less purely beautiful than Ruehr’s, are more harmonically intense. Like Ruehr, Higdon has learned something from postminimalism. There’s even a hint of classic minimalist phase techniques. As an admirer of John Adams’ chamber music, I found a lot to like here.

And the old masters? Three of Dvořák’s Cypresses, instrumental arrangements of his own songs, with Deborah Buck’s first violin taking the singer’s line, made an appropriate match to the vocal works on the program. And the four separate pieces of Mendelssohn’s posthumous Opus 81 collection were played with great affection, each acting as an homage to one of the earlier composers Mendelssohn took as his models: Mozart’s grace in the Theme and Variations, Beethoven’s roughness in the Scherzo, the desperate emotion of Schubert in a gripping performance of the Capriccio, and the serenity of Bach in the Fugue.

The Lark Quartet, or Quarte+, has had some changes in personnel since it last performed here. Second violinist Basia Danilow, the newest member, plays with a poignantly distant tone, distinctive even when she’s sitting not 15 feet away. Stinson, the cellist, is also new; she gives more of a lyrical than a rhythmic foundation to the ensemble. The rhythmic engine at the center of the Quartet is violist Kathryn Lockwood, especially notable in the tiny repeated figures that drive Wiprud’s “radio signal” music. And Buck, as first violinist, leads at the top with a crisp, vividly present sound.