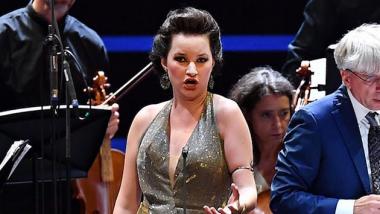 Operatic sensation Anna Prohaska may be new to the Baroque scene, but the characters she chose to explore in her BBC Proms debut have long since captured the imaginations of composers and poets. In a thrilling program of much-loved standards and some rare gems, Prohaska and her band of merry players, Il Giardino Armonico, brought the mythical Dido and all-too-real historical figure of Cleopatra to life.

Taking the audience on a whistle-stop tour of Europe, based on their 2016 album Serpent and Fire, they started close to home with “Ah Belinda, I am press’d with torment” from Henry Purcell’s Dido and Aeneas (first performed just a stone’s throw away from the Royal Albert Hall at Josias Priest’s girls’ school in Chelsea). Austrian-born Prohaska came into her own with selections from Johann Christian Graupner’s version of Virgil’s tale, in the aria “Holdestes Lispel der spielenden Fluthen” (Loveliest whispers of rippling waters, from Dido, Queen of Carthage, a Singspiel, 1707) with crystal clear delivery of the text offset by sultry, blue-note ornaments.

In Prohaska’s own words, performing with Giardino Armonico is like “singing with your favorite rock band” and, as with all good rock acts, a bit of rule breaking is essential. The orchestra opened the piece with an atmospheric, murmuring trill, a perfect introduction for the image of rippling waters restraining their “enchanting rushing.”

From rushing waters to a rush of blood to the head, Prohaska gave a dizzyingly exuberant performance in several numbers from Antonio Sartorio’s Julius Caesar in Egypt (1676), “Non voglio amar” and “Quando voglio,” another first for the Proms and a memorable experience for the Prommers. The Francesco Cavalli aria, from “La Didone” (1642), was a personal highlight: Prohaska’s energized Italian vowels and strong dramatic portrayal of Dido’s defiant nature, had the reclining Prommers in the arena sitting on the edge of their coats.

Il Giardino Armonico really brought the party spirit, with synchronized swaying and foot stomps: They have a vibrant collective timbre and the concertina kept up a lively conversation throughout the evening. The orchestra’s ability to make music appear out of thin air and disappear again into the ether is magical; Matthew’s Locke’s “Curtain Tune” (from The Tempest, 1674) provided the perfect stage for them to showcase their musical tricks.

The evening was concluded with a round trip back to Purcell’s Dido and Aeneas. The orchestra took on the final chorus of Dido’s cortege, “With drooping wings ye cupids come” and pulled it off with courtly grandeur fit for a queen. Dido’s handmaid’s aria ‘Oft she visits this lone mountain’ suited Prohaska’s sweetly mellow soprano beautifully, and the high notes rang out with a bell-like quality.

Prohaska’s performance of Dido’s iconic lament “Thy hand Belinda ... When I am laid in earth” might have captured more of the arresting sincerity of this moment with less accented phrasing, but it was still an impassioned performance that had the audience stomping, this time for an encore. Conductor Giovanni Antonini stepped up to the plate as “second soprano” on his soprano recorder and joined Prohaska in a farewell duet: “Fear no danger to ensue,” an ideal choice for this fun and fearless evening’s entertainment.

Laura Clark is a soprano and freelance journalist based in England.

What if Dido and Aeneas Really Was Composed for a Girls' School?

Voices of Music and the San Francisco Girls Chorus create a version like the one performed in Purcell's lifetime.