Lila Downs Is All Showbiz at SFJAZZ

Born and raised in Oaxaca to a Mexican mother and a Scottish-American father, Lila Downs presents herself as an entertainer with a resounding technicolor mission to entertain emigrants and recruit the attention of non-Hispanic Americans, both of whom crowded SFJAZZ’s Miner Auditorium on Friday evening.

Her irresistibly theatrical performance was heralded by her ensemble’s three horns (including local trombonist Jeff Cressman) parading down the aisles in the intro to “Las Marmotas,” also the first track on her recently released album Al Chile (Sony Music Mexico). Wearing a layered, floor-length, decorated, traditional Mexican dress and long dark braids, her mic stand wreathed in flowers, the 50-year-old Downs vocally caressed her fans, her eight-piece band (which also included drums, percussion, bass, and guitars) playing out the melody, redolent of both Moorish-Iberian roots and klezmer. 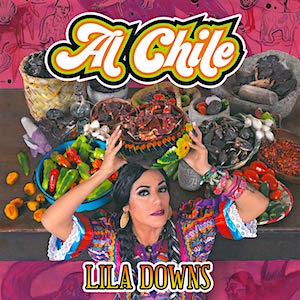 “La Campanera,” also on the album (as were five others of the concert’s 18 offerings), shifted the rhythm from the lilt of the previous song to a slow chug, with Downs keeping time on cowbell. Somewhat distracting, here and throughout the intermissionless show, were lurid projections above and behind the stage, which often had no perceptible connection to the messages of the lyrics.

Downs praised San Francisco’s “always being open to learning,” before proceeding with “La Martiniana,” another traditional song, in slow waltz time, which has been arranged by, among others, David Conte. With characteristic generosity, Downs moved around the stage to address the Spanish-language lyric (translated as, “When I die, don’t cry over my tomb, sing me a beautiful song”) to every part of the house. A pair of acoustic guitars, ever so slightly out of tune, enhanced the folksiness.

For “La Iguana,” Sinuhé Padilla, who also sang and played acoustic guitar and the diminutive guitar-like jarana, came forward to tap dance, in delightful duo with Nikki Campbell on quijada, a rattle and percussion instrument fashioned from the jawbone of an equus. Somewhat silly but affecting, the mood was further tickled by Downs’s birdcalls and trills, and three-man backup vocals.

Downs switched to slightly accented English and a dusky almost C&W-ish alto for her cover of Gillian Welch’s “Dear Someone,” heard on Al Chile in a duet with Norah Jones. The song harkened back to 20th-century last-dance numbers, although musical director and tenor saxophonist Paul Cohen laid in a ranchero horn arrangement. “Seguiré Mi Viaje” tuned listeners into the rather corny theatricality of a telenovela, a Latin American soap opera, reminding those in attendance that watching Downs sing is a memorable experience, even when what she’s singing isn’t.

The “Son Del Chile Frito” was an aural (and on-screen visual) celebration of the titular Mexican vegetable, appropriately hot and insistent. For “Urge,” the projections waxed helpful with an English translation. There was a temporary reduction of the ensemble to guitars and bass on the slow ballad “Paloma Negra,” in which it was tough to discern whether Downs was emoting or clowning; she’s aptly capable of both. She covered Colombian firebrand Shakira’s tale of forbidden passion, “Clandestino,” in a sassy juvenile, higher-pitched soprano, further showcasing the range and flexibility of her voice.

“Viene La Muerte,” as you might guess from the title, has been part of Downs’s repertoire for Dia de Los Muertos shows. The projections of Mexican calaveras illustrations were appropriate in this case, as was the accompaniment on cajón (a percussive box seat) and Jeff Cressman’s somber trombone solo (which deserved applause but didn’t get it from this audience).

The familiar mournful Mexican folk song “La Llorona” was refreshed by Downs’s credible sighs and groans, at one point kneeling on the stage. The horn arrangement, though, waned into some sort of dreary Mexican fusion. “La San Marqueña,” from Downs’s native region, fetchingly evoked a cantina, with some in the audience grateful that design of the Miner Auditorium allowed them to position their beers and margaritas securely next to their seats. They were then summoned to get up and dance on “Cariñito,” introduced by Downs as a “cumbia peruana,” It seemed here and elsewhere like an easy gig for the instrumentalists: neither the melodies nor the arrangements demanded much of them, and there was lots and lots of repetition.

Downs vocally and visually inhabited the titular avian on the familiar “Cucurrucu Paloma,” singing in an alluring contralto, cooing, and flapping her mantilla. Her crowd-friendly flight fortunately wasn’t impaired by a particularly irrelevant horn arrangement. After a generous shoutout to her SFJAZZ hosts, including director of education Rebeca Mauleón, Downs donned a sombrero for a feisty grito for Mexican Revolution hero “Zapata.”

Spirits stayed high for a couple of encore tributes, the first to a “Mezcalito,” with the singer drinking and passing to the audience a bottle which may or may not have contained the alcoholic beverage made from the agave cactus. Then came a “Cumbia del Mole,” the joyous melody and the projections lauding the recipe, popular in Oaxaca and elsewhere and involving both chiles and chocolate.

The audience ambled out happy but hungry for more. They’ll get it in October, when SFJAZZ brings Downs back for a Día de Los Muertos show at the Paramount in Oakland.

The Warrior Voice of Lila Downs

The inventive duo joins forces with percussionist Tupac Mantilla in a set of John Zorn pieces.