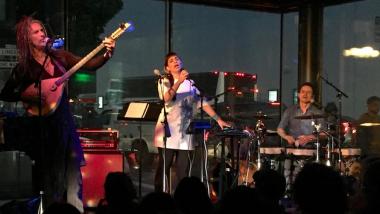 Attempting to succinctly characterize John Zorn’s music is a fool’s errand. With its endlessly multiplying chapters and expansive network of collaborators, the New York composer, saxophonist, and foremost chronicler of radical Jewish music has produced such a vast and varied body of work that covering him could easily turn into a full-time beat. I make only occasional forays into the Zorn galaxy, but I’m fairly confident that Sofía Rei and JC Maillard’s recent album Keter (Tzadik) is a unique and particularly luminescent addition to the Zornian firmament.

Rei, an Argentine-born, New York jazz vocalist with a voluptuously full mezzo-soprano, and multi-instrumentalist JC Maillard, who’s made a specialty out of collaborating with extravagantly inventive vocalists, presented an abbreviated West Coast premiere of pieces from the third installment of Zorn’s epic Masada, Book of Beri’ah, last year at The Chapel. It was one of the highlights of the packed program celebrating Zorn’s 65th birthday. Back in San Francisco on Friday for two shows at SFJAZZ’s Joe Henderson Lab to celebrate the music’s release on Keter, Rei and Maillard expanded to a trio with the brilliant Colombian percussionist Tupac Mantilla.

With Spanish-language lyrics by Rei and songs arranged with Maillard, the music is full of surprises and rarely betrays Zorn’s hand as the composer. Instead, with her witty and succinct introductions, Rei fully inhabited the songs, explaining the deeply personal points of inspiration for each piece. In Maillard, a singular musician from the French Caribbean island of Guadeloupe who’s performed widely around the Bay Area with the resurgent Lisa Fischer, Rei has an ideal partner.

Playing a custom-built string instrument modeled on a Turkish saz, he supplied rhythm, melody and particularly bass, while Rei employed artful sound design, adding pronounced reverb or electronic drones and looping her vocals to create three- and four-part interlocking lines. The duo opened with two pieces, the dramatically rising “Setumah” and “Ketarim,” a song about Frida Kahlo and Diego Rivera that reached an urgent pitch with a sustained drone.

Mantilla joined in and opened “Kayam” with a beautifully constructed polyrhythmic body percussion solo that built from the soft hand claps and palm friction to chest thumps and foot stomps. He and Maillard added vocal harmonies on “Orot,” a song about news Rei recalled hearing about the Falkland Islands as a grade schooler. Looping her vocals as if peeling back time, she filled out the band’s sound strumming the charango, a diminutive Andean lute.

The entire evening was a study in rhythmic invention, but the trio devised a particularly devilish groove with the reggaetón-inspired setting for “Ge’ulah,” with Mantilla taping his trap set with a bare left hand while caressing the cymbals with a large whisk-broom-like brush in the right. Like with all the songs, the Hebrew titles seemed to provide the barest tether linking them to the composer.

Rei is no newcomer to Zorn’s musical world. Back in 2010, she was one of four singers on the a-cappella project Mycale: Book of Angels Volume 13 (Tzadik) from Zorn’s second Masada volume, The Book of Angels. And as part of his 60th birthday celebration in 2013 she contributed lyrics to Song Project, which drew on compositions from some three decades of his output.

He’s hardly the only creative heavyweight to recruit her. Rei is at the center of the wave of Latin American musicians who have transformed the jazz scene in recent decades, and since moving to New York in 2005, she’s collaborated with bandleader/composer Maria Schneider, vocalist Bobby McFerrin, the Klezmatics, composer/bandleader Guillermo Klein, and pianist Geoffrey Keezer.

In her own music she’s forged a striking pan-Latin American sound, a rhythmic palette that transforms Zorn’s music into a pulse-quickening old world/nuevo mundo collision.

The singer and versatile multi-instrumentalist leads her crackerjack band through timeless selections from her pan-Caribbean songbook.