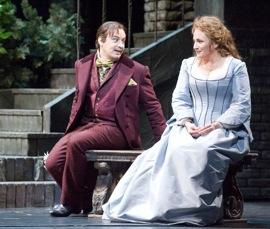 For the San Francisco Opera to stage Charles Gounod’s Faust now, 10 years into the 21st century, shows an odd kind of daring. Yet this traditional-looking production from the Lyric Opera of Chicago, directed by Jose Maria Condemi, with sets and costumes by Robert Perdziola, brings a museum piece to genuine new life. Central to this fine success was the debut conducting of Maurizio Benini, who on Saturday led the orchestra in a propulsive though sonically beautiful performance. His approach honored the classic French style, while updating it with a dash of Italianate momentum.

To a visitor from earlier times, it could seem strange that this opera would need renovation. For if any single work has symbolized the public’s love–hate fantasies about opera, surely it is Faust. Between a fabulously successful revival at the Paris Opéra in 1869 and the slow fade-out following World War II, opera houses around the world recorded literally thousands of performances.

Faust even opened the new Metropolitan Opera House in 1883. Since then, Gounod’s place in our collective awareness has been secured, for instance, by Edith Wharton’s novel The Age of Innocence, by multiple versions of The Phantom of the Opera, and even by Monty Python. But can Faust’s long run continue? San Francisco joined the hysteria with 15 productions during the half century before 1977, yet Gounod’s fire and brimstone have found a place here in only three productions since.

Gounod changed much about his Faust following its 1859 premiere, but the core story remains. The aging scholar Faust, on the verge of despairing suicide to end his life’s ebbing energy, signs a pact with Méphistophélès. In exchange for Faust's renewed youth, Satan will serve him on Earth and will sanction his love of Marguerite, whom he sees in a vision. He seduces, impregnates, and then abandons her, only to fall into new despair as her sin is redeemed in a heavenly apotheosis, while he is dragged off to Hell. This love story is embedded in J.W. von Goethe’s vast philosophical drama, and Gounod’s Méphistophélès does raise serious points in his alliance with the church to secure Marguerite’s damnation, but the opera is about romance and redemption not about philosophy.

Both love and the struggle between good and evil center on Marguerite, a young woman who describes herself as “neither important nor pretty.” Her ravishing music undercuts this claim. On Saturday night, San Francisco favorite Patricia Racette caught both the girl’s modesty and the charm her music portrays. Racette’s voice is not that of the traditional Marguerite; it is a hefty instrument, easily at home with Puccini and less with the supple legato of French singing. She barely gestures at the elaborate coloratura of the “Jewel Song,” for instance. That said, she brings a passion and vigor to the role that our moment calls for, and that meshed perfect with Benini’s approach to the score.

John Relyea — another Merola and Adler Fellowship graduate who has become a world star, like Racette — played the devil, Méphistophélès, with understated charm. The part lies perfectly for his suave bass, and for his youthful, towering appearance. In a recent interview, Relyea suggested future moves into Verdian or even Wagnerian terrain. For now, we can revel in the delightful ease, range, and tonal beauty of his instrument, as well as his onstage charisma.

San Francisco’s Faust, Stefano Secco, has sung chiefly Italian roles, yet he revealed a fine understanding of the French style and an excellent command of the language. Relyea also commands French, but this cast, on the whole, offered little phonetic consolation to the Gauls. Secco’s largely attractive tone could veer into the nasal (this can be part of the French style), and he resorted to falsetto at one very exposed moment. Still, he was musically convincing in this long and varied part.

Brian Mulligan, gifted with a strong, consistent baritone voice, fell short as Marguerite’s brother Valentin, because of his foursquare rendering of his part — especially “Avant de quitter ces lieux,” arguably the most memorable aria in the opera. He was hampered both by his literalistic French and (not his fault) by having to stroll about the stage holding his side for some minutes after receiving a fatal wound from Faust. The stage director must have confused a desperate stab to the back with indigestion.

Daniela Mack was a sprightly Siebel, who brought emotion and vigor to the part of Marguerite’s teenaged admirer.

I will confess that I’ve never connected with Faust, though I’ve seen a number of stagings over the years, often with some fine singers. This production woke me up to the great beauty and dramatic power of the work. Do make it to the Opera House to see for yourself.