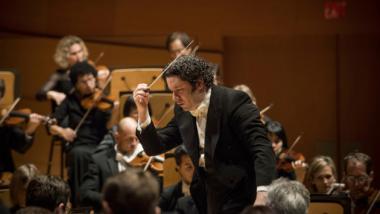 As a climax to its 2014-2015 season at the Walt Disney Concert Hall, the Los Angeles Philharmonic has thrown orchestral new-music programming formulas out the window. Under the banner of the Next on Grand Festival (May 26 through June 6) the orchestra is presenting, not a couple of new works sandwiched between classic works, but a series of seven concerts in which every note is by a living American composer.

The concerts were in many ways a continuation of last year’s Minimalist Jukebox. There were works by minimalist pioneers Philip Glass and Steve Reich, and their followers John Adams and Bang on a Can’s co-founders David Lang, Michael Gordon, and Julia Wolfe. But there were at least as many pieces by the new pioneers — composers who have pulled out of the post-minimalist orbit, like Andrew Norman, Christopher Cerrone, Jacob Cooper, and Caroline Shaw.

Of the seven world premieres, three have featured the full strength of the L.A. Philharmonic, conducted by its music director, Gustavo Dudamel. To add perspective, the festival also programmed two significant revivals: Three Tales, the provocative 2001 music/video collage by Steve Reich and Beryl Korot; and Available Light, originally composed by John Adams in collaboration with choreographer Lucinda Childs in 1983.

The primary goal of the Next on Grand Festival has been to explore the impact of minimalism. As a movement, minimalism established new guidelines and structures based on repeated figures driven by a central pulse. But of equal importance was its composers' successful assimilation of a diverse universe of musical influences, from African drumming to acid-rock.

The May 28 premiere of Glass’s Concerto for Two Pianos, composed for and performed by Katia and Marielle Labèque, may not have offered any surprises, but it glowed with self-assurance. The development of interlocking arpeggios, the swirling figures in the winds, the resounding statements in the brass were familiar. What was surprising was the range of expression in the dual pianos, which combined to form one mighty, instrumental voice, blending into the overall orchestration and then emerging in bold gestures and cadenzas. You wouldn't think of Rachmaninoff and Glass as kindred spirits. But the rich and sumptuous score did suggest that comparison.

Reich’s Three Tales is a totally different animal. It was conceived as the 21st century was dawning. But its perspective looks back, as each movement focuses on a technological event that defined the 20th century: the catastrophic immolation of the airship Hindenburg; the 1946 detonation of the hydrogen bomb over Bikini Island; and the god-like 1997 act of genetically cloning Dolly the sheep.

The May 29 performance featured the musicians and singers of Ensemble Signal under the direction of Brad Lubman. It was an assaultive experience musically, visually, and philosophically. Reich’s highly amplified music with its repetitive structures, propulsive rhythms, and dovetailing vocal lines created a charged atmosphere accentuated by Korot’s video assemblage, which combined archival newsreel footage, split-screen effects, and contemporary talking-head interviews phased to match the musical textures.

As in Tehillhim (1981), Different Trains (1988), and The Cave (1993), Reich’s desire is to create a musical experience with a moral center that poses at least as many questions as it answers.

These do not seem to be the type of questions the new generation of composers are asking. They may ponder them, but their expression in music favors complexity, structure, and metaphor over literal discourse.

This perspective was best expressed in the opening concert of the festival on May 26, selected and conducted by John Adams. The titles suggested a cosmic perspective: Dylan Mattingly’s Seasickness and Being (in love); Cerrone’s song cycle, The Pieces that Fall to Earth; Cooper’s video installation, Alla stagion dei fior; and Sean Friar’s Finding Time.

For Mattingly this meant creating a tonal universe that begins within a decidedly helter-skelter, off-kilter world of microtonal imbalances designed to express the thousand natural shocks that flesh is heir to. But at a point, the piece attains critical mass and blasts off into an interstellar realm where time, space, and perspective take on an entirely different meaning.

Cooper’s Alla stagion dei fior was conceived as a video installation accompanied by his own rumbling electronic score. It offers a macro/micro view of the final scene of Puccini’s La Boheme as the camera ever so slowly zooms out of darkness toward the face of the dying Mimi. It then passes her, continuing into whatever realm lies beyond, ending as it began in a void of darkness. [Steven Mackey's] score alternates between glimmering reflections, shadowy undulations, and jagged, hard-edged tonalities.

A dedication to complexity and a vast sense of orchestral coloration are the key elements of Steven Mackey’s impressive Mnemosyne’s Pool, which had its premiere on May 29. It is in four movements for full orchestra and a battery of percussion and the score alternates between glimmering reflections, shadowy undulations, and jagged, hard-edged tonalities. The surprising element is that there are at least as many soothing, major key passages in the strings evoking the spirit of Samuel Barber. Dudamel conducted it with luminous intensity.

And then there was Partita for Eight Voices by Caroline Shaw, which won the 2013 Pulitzer Prize. Performed by the vocal ensemble Roomful of Teeth, its four dance movements (Allemande, Sarabande, Courante, and Passacaglia) lit up Disney Hall with melodic delight, delicious harmonies, and a sense of pure human joy that had not found its way into any of the other compositions.

With its myriad influences— from square dance calls and throat singing to baroque ornamentation— it was like listening to a musical equivalent of the great photo exhibition, The Family of Man. It’s music that left you with the feeling that maybe there is hope for us after all.