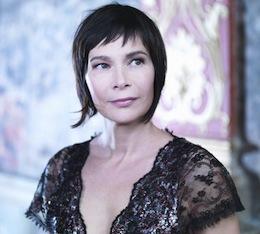 The Loveliness of Sandrine Piau

As proof of spring, as if proof were needed, Sandrine Piau came to Berkeley. Ably supported by Susan Manoff, the French soprano at last brought her exquisitely poised vocalism to Hertz Hall. In a program that paired the more or less known — songs by Mendelssohn, Fauré, Chausson, Strauss, and Poulenc — with three of Britten’s folk song arrangements and a “new” cycle, tailored to her gifts, by Vincent Bouchot, Piau produced such an unfettered flow of springlike sounds as to leave me feeling as though the sun had moved indoors for her recital.

Fashionably outfitted, first in a somewhat conservative black floor-length gown with ivory lace and a shawl that slid back to reveal her slender shoulders, then in another black and ivory lace outfit whose conservatism gave way to a left slit up to high thigh and a back open down to the sacrum, the soprano with the high cheekbones and runway model’s figure displayed a rare instrument. Not since the heydays of Elly Ameling and Barbara Bonney have we heard a voice so radiant and healthy. Rising up from a midrange whose substantial body displayed a warm edge achieved without a trace of bloat, Piau’s upper middle and high ranges rang freely throughout the hall.

Thanks to her rare gifts, the final song, Britten’s arrangement of John Jacob Niles’ I Wonder as I Wander, was especially remarkable. Mostly singing unaccompanied, and repeating the final verse with her back to the audience, Piau floated high notes that not only echoed in the hall for several seconds with astounding clarity and freshness but also continued to reverberate within the expanse of Manoff’s open-lid Steinway. The effect may have been unintended, but it was marvelous. Only a voice this pure, with intonation so flawless, could seem to linger long after it had sounded.

Piau’s interpretations, at least when it came to songs by everyone except Bouchot, were distinctly “modern.” Absent was any trace of portamento, romantic rubato, word painting, and the like. With only Manoff providing variation by slowing on occasion between vocal phrases, this worked wonderfully in the opening songs, Mendelssohn’s Nachtlied (Night song) and Neue Liebe (New love), where Piau’s supreme loveliness of sound and total control at a fast pace were so dazzling that words hardly mattered.

Only a voice this pure, with intonation so flawless, could seem to linger long after it had sounded.

In subsequent songs, including Fauré’s Les Berceaux (Cradles) and Après un Réve (After a dream); Strauss’ Morgen (Tomorrow), Die Nacht, and Ständchen (Serenade); and Britten’s take on the traditional Irish song The Salley Gardens, Piau’s steadiness of tempo and unvaried approach to text led to a bit of monotony. The soprano seemed content to settle on the dominant color appropriate to conveying the import of works and melody, to sing impeccably, and to leave it at that. Fine, perhaps, in a song like Nacht, where it’s easy to float off into dream on such a beautiful stream of sound. But when you have a string of songs filled with either romantic longing or French wistfulness, you need something more than beautiful vocalism along with unvaried tempo and phrasing to pull them off with genius.

Morgen was a disappointment. Manoff, who never once upstaged her soprano, began the long piano introduction beautifully, with a poetic touch. But when Piau entered, the pace quickened, and remained unvaried. After a gorgeous pure high G on “wogenblauen” (blue waves), Piau concluded the main body of the song without slowing even an instant.

Before the final two lines, essentially a quasi-recitative meant to be sung with great poignancy, Manoff did slow down enough to suggest that a change of delivery was in store. But when Piau reentered, the closing was delivered in the same steady tempo as before, without any indication of the deeper meaning of words. The song was rendered prosaic.

Piau brought to Ständchen a lightness and radiance that few sopranos can achieve.

Piau brought to Ständchen, parts of which are meant to trip along “light as elfin steps,” a lightness and radiance that few sopranos can achieve. Yet the song’s essentially romantic nature — it tells of two young lovers who steal out of the house while everyone is asleep, and trip lightly across a field and through flowers before lying under a linden tree to do far more than count the stars — was shortchanged by a refusal to slow down on such phrases as “only love is awake” and “dream of our kisses.” Instead of the romantic pulling and tugging heard in the definitive Strauss recordings of Elisabeth Schumann, who toured the U.S. singing Strauss with the composer as accompanist, we heard present-day Mozartean classicism.

That Piau is capable of more than straight singing was heard in her rendition of Bouchot’s five mildly wicked, tongue-in-cheek Galgenlieder (Gallows songs). Although composed in 2009, the songs hark back to the harmonic language and devices of Hugo Wolf. As such, they call for the kind of character that Elisabeth Schwarzkopf, who was anything but neutral in her interpretations, brought to lieder.

Piau, perhaps encouraged by Bouchot, transformed her delivery. Key words were stressed, tempos were varied, and theatrics came to the fore. With Manoff free to go to town, the set was a triumph.

Poulenc’s C was another high point. After 16 lines that were spun like silk, Piau slowed magically as she called out to her forsaken homeland. If only she had done the same elsewhere in the recital.

Three encores were performed, with Fauré’s beloved Clair de Lune (again sung without lingering) framed by Poulenc’s “Voyage à Paris” from Les Banalités and Strauss’ “Efeu” from Mädchenblumen (with a wondrous descent from high A flat to low E flat). When all was said and done, I could only feel gratitude for this artist whose voice affirms the beauties and wonders of life on earth.