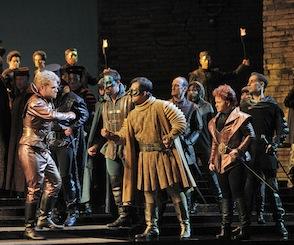 What constitutes great bel canto coloratura? Is it simply the ability to toss off trills, roulades, embellishments, and interpolated high notes with ease? Or is it the ability to sing all the notes, and then some, with the brilliance and passion that turn florid writing into searing drama or, in the case of comedy, gravity-defying delight?

Such thoughts came to mind when, after a delay of almost 178 years, the San Francisco Opera finally brought Donizetti’s Lucrezia Borgia to the stage as a vehicle for soprano Renée Fleming. Fleming, 52, who first sang the role in 1990, the year before she debuted at both San Francisco Opera and the Met as Countess Almaviva in Mozart’s Le Nozze di Figaro, has built her career by occasionally interspersing essentially lyric roles with bel canto gems whose writing for soprano or high mezzo tend to lie lower in the range.

As expected, Fleming looked gorgeous onstage. She also moved with feeling, if not riveting energy, and sang very well. If her coloratura lacked some of the high flying escapades that raised eyebrows on her 1999 recording of the opera’s third act finale, it nonetheless abounded in steadiness, a number of admirably executed trills, and vocal beauty. Although she capped Act 1 with a high D-flat, and expired after what I’m pretty sure was a high E-flat, the singing lacked the tonal brilliance and inner tension requisite for a great Lucrezia.

Fleming’s portrayal was more than occasionally eclipsed by the sensational singing of tenor Michael Fabiano as Lucrezia’s secret son, Gennaro, and mezzo-soprano Elizabeth DeShong as his soldier lover, Maffio Orsini. Fabiano, whose grand prize in the 2007 Metropolitan Opera National Council Auditions was framed by a host of other awards, possesses a beautiful, youthful tenor equally abundant in light, masculine heft and tonal brilliance. In addition to a technical surety and impeccable legato that seem ideal for bel canto, he also looks wonderful onstage. The quasi-Star Trek outfit that helped distinguish director John Pascoe’s production revealed more of Fabiano’s toned front torso as his character’s torture increased.

Pennsylvania-born DeShong, who looks considerably less than 5 feet tall, sings like a vocal giant. Her lowest notes have body and depth, the midrange is especially rich, and she propels her secure, full, and rounded highs with, to use one of my favorite critic's adjectives, aplomb. Her duet with Fabiano at the start of Act 3 was sensational, and the second verse of the famous “Brindisi” a cheer-eliciting tour de force. What a pair!

Bass Vitalij Kowaljow (Duke Alfonso) was not far behind these two. While his Act 1 singing lacked tonal variety and displayed a bit of an edge, the voice soon warmed to produce a dark, authoritative portrayal. As a jealous, vengeful sadist, the Duke hardly elicits the sympathy that his more tortured, poison-wielding wife does. Kowaljow’s singing made us want to see the Duke live through the end of the opera.

Adlers, Choristers, and Others

Pascoe’s direction, sets, and presumably costumes blend large block functionality with grand gold flourishes. Especially keen to play up the homosexual bond between Gennaro and Orsini, he also managed to elicit sympathy for a femme fatale whose frequent dispensation of poisoned wine is tempered by her tortured past of abuse at the hands of men. Did you know that the young Lucrezia may have been sexually abused by both her brothers, as well as by her father, the future Pope Alexander VI?

And Then There Was the Conducting

Riccardo Frizza’s San Francisco Opera debut comes after a string of performances at the Met and other major houses. Although he has conducted at least ten bel canto operas, many of his tempos lacked pliancy. Act 2 found him driving singers and orchestra like a Muni driver determined to reach every stop on time, even if it meant leaving some potential passengers behind; rapidity did little to compensate for a lack of breathing space.

How much of Frizza’s no-nonsense drive was done in order to support Fleming in areas where she preferred not to linger cannot be determined from a distance. Thankfully, the freneticism eased up in the finale of Act 3, allowing as much of a sense of tragedy as Fleming was capable of generating to sink in.