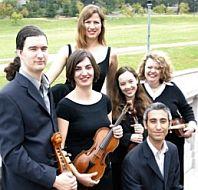 The Lure of the Lyre

Joseph Sargent on November 20, 2007
The best chamber music performances often convey the impression of a conversation among friends. Sometimes one party commands the discussion, at other times someone else takes charge, but everyone seems fully engaged no matter who has the floor. Hearing the Baroque chamber ensemble La Monica in performance Saturday at Berkeley's St. John's Presbyterian Church was like witnessing an extended dialogue, one whose subject matter might be unfamiliar but that nonetheless left you enthralled. Perhaps the best interpretation of the occasion would be a reunion of old friends, since the program of 17th-century Italian repertoire, "The Amorous Lyre," comprised the original pieces that first brought these performers together while studying at the University of Southern California. But if this conversation had several participants, the main subject focused on a single topic: Tarquinio Merula, a versatile composer of keyboard, instrumental, and vocal music whose works occupied nearly the entire program. Despite this consistency the program never sounded repetitive, thanks to the great variety of instrumental and vocal combinations on display. That this ensemble of just seven players can produce so much variety in sound, textures, and dynamics was perhaps the evening's greatest achievement. Several pieces based on recurring ground-bass patterns showcased La Monica's impressive versatility. Merula's Ciaccona featured violinists Tekla Cunningham and Susan Feldman in the first of many displays of virtuosity. The striking contrast in tone between these players — Cunningham possessing a brighter sound, Feldman a far more mellow tone — only enhanced the sense of textural variety that characterized the program as a whole. The Passacalio by Biagio Marini was a moodier piece, its slow tempo and elongated melodies giving the impression of unfathomable sorrow in La Monica's captivating performance. Many of La Monica's repertoire choices sought to accentuate dramatic characterizations. The jaunty rhythms of Merula's Ballo detto pollicio slowed suddenly before the ensemble gradually accelerated to a rousing close, while the Canzona la fontana found the ensemble in undulating ebb and flow patterns, instruments alternately rising forward and receding into the background. In both cases, the ensemble's irrepressible energy and pitch-perfect timing proved a winning combination.

Wishing and Hoping and Praying

Soprano Phoebe Jevtovic Alexander displayed great agility and compelling stage presence in several songs (despite an obvious foot injury). Her honey-sweet vocal quality and effortless ornamentation breathed life into Merula's Quand'io volsi l'altra sera (When I wished the other evening), a comical tale of a man's resolution to seek out greener pastures should his beloved not desire his intimate company. Alexander's lovely rendition of Aria della monica, a girl's plea not to be forced into the convent, was followed immediately by Biagio Marini's sonata on the same melody by the ensemble, one of many seamless transitions within the program. Other vocal pieces pushed the dramatic envelope even further. Merula's Hor ch'è tempo di dormire (Now that it's time to sleep) is a haunting piece, depicting Mary's plea to the newborn Jesus to rest even as she foresees his harrowing death. A gentle lullaby, vividly evoked by a two-note ostinato, gives way to several moments of anguish before concluding in quiet repose. Alexander exploited these contrasts to full advantage, powerfully conveying Mary's anxiety and the vivid descriptions of Jesus' sufferings. Chitarrone/guitar player Daniel Zuluaga not only provided exemplary rhythmic support, but also showed great inventiveness in varying the piece's repeating patterns. A more joyful expression of love regained was Su la cetra amorosa (To the amorous lyre). Here Alexander handled the highly ornamented vocal lines with ease, ably complemented by the florid playing of Cunningham and Feldman. The piece's vivid text painting, combined with La Monica's obvious zeal for the material, made for a highly appealing performance. Most of the other performers enjoyed at least a moment or two in the sun. Merula's Toccata in the Second Tone featured harpsichordist Avi Stein, showcasing his fluid command of the piece's many sweeping gestures. Viol/cello player William Skeen displayed great technical fluency in Dario Castello's Sonata X and in solo passages from Merula's Ruggiero, which also found Cunningham and Feldman noodling away in fine form. One might have hoped to hear more from Zuluaga and violist Ondine Young, if only so that this sparkling conversation might be further enriched.