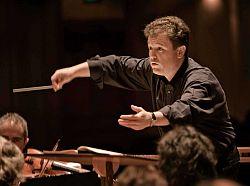 Cello concertos are where you find them. Visiting soloist Gary Hoffman found two excellent short pieces that work well in that role, though they aren’t called concertos, to play with Symphony Silicon Valley, under guest conductor Gregory Vajda, at San José’s California Theatre on Saturday.

Max Bruch’s Kol Nidrei is his arrangement of a medley of two Jewish melodies — one liturgical, the other a song written by a cantor — for solo cello with a soft, quietly lush orchestral background. This composition instantly made Bruch the most famous Jewish composer in the world who wasn’t actually Jewish. Some critics even accused the work of not sounding Jewish enough. (One reason given: There weren’t enough intervals of augmented seconds, as violist Janet Sims explained entertainingly in her preconcert lecture.)

The other work is bouncier and wittier, though not lacking in reflective moments. This is Tchaikovsky’s Variations on a Rococo Theme, Op. 33, in the commonly used abridgment and recomposition by its dedicatee, Wilhelm Fitzenhagen. Tchaikovsky chose the variation form as suitable for the Mozartean elegance and restraint he wished to emulate in this concerto. The theme, Tchaikovsky’s own Mozart pastiche, gets put through the kind of paces that Tchaikovsky’s imagination was particularly suited to provide.

Hoffman played both works with delicacy and a lightness of touch. His characteristic is a gentle lyricism, mature and contemplative, which was especially well-suited for the Bruch. Hoffman refused to be lured by the bravissimo displays of Fitzenhagen’s cadenzas, and remained calm and thoughtful. His more-forthright passages alternate with a kind of inwardness that’s not quieter, just more intimate, enveloping the listener in his reflections on the music.

It takes a bold orchestra to interact confidently with this. Bruch gives little difficulty, as the orchestra’s role is predominantly to give pillowy support, with some moments of strong contrast. The Tchaikovsky contains more duets and exchanges of phrases, mostly with the wind soloists, who on Saturday held up their ends gallantly. There’s one particularly tricky moment when the orchestra’s violins and violas are holding high notes in harmonics, and the solo cello line rises up to meet them. They simply have to hope they’re standing in the right place to catch him, as it were. It didn’t quite come out in the perfect spot, but it was close enough to retain the beauty of the phrasing.

Tchaikovsky missed a bet by not incorporating the Variations into a full concerto. As it stands, it would have made a good last movement for a larger masterpiece — like, for instance, the even larger theme and variations that concludes his Suite for Orchestra No. 3 in G, Op. 55, which was the final work on the program. The most popular of the four suites he wrote as a break between his Fourth and Fifth Symphonies, it begins with a calm elegy reminiscent of the Serenade for Strings (which also dates from this period). There’s a somber waltz that begins, appropriately, with a phrase for violas, plus a chattering scherzo with enough percussion to keep it lively. The finale’s variation theme is even more charming than the one in the Rococo Variations. There’s opportunity for wit here; this performance leaned more toward the earnest side, and proved none the worse for that.

Rounding off the program was the opener, The Fair Melusine, an overture by Mendelssohn. Inspired by another composer’s opera about a freshwater mermaid, it provides a topic uniting Mendelssohn’s fairy-tale and waterscape interests. Musically, the result resembles The Hebrides more than A Midsummer Night’s Dream. The river music is also strikingly reminiscent of Wagner’s Rhine — or, rather, the other way around, since Mendelssohn wrote first — though this performance downplayed that resonant quality.

On previous conducting visits to San José, Gregory Vajda has been notable for somewhat mannered interpretations. I did not detect that this time. He cultivated simple grace and striking color with sufficient underlying drive to keep the music going without burning up in a blaze of energy. The clean, crisp approach was accentuated by the California Theatre’s bright, shiny acoustics, perhaps especially in the balcony front where I sat. The strings became metallic; the winds honked; balances, otherwise well-calibrated, were sometimes off; Tchaikovsky’s tutti climaxes disappeared in a crackle of overloaded sound.

This, though most unfortunate, was the auditorium’s fault, not that of the musicians. They played dutifully, with clarity and assurance. I was especially pleased with the strings this time; all their sections played well. Special note goes to the first violins, carefully balancing legato and detached phasing, and emitting a rich, deep sound belying the fact that there were only 13 of them. As a smallish orchestra, Symphony Silicon Valley does well at husbanding its sound.