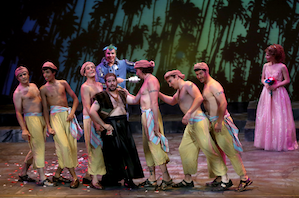 This Magic Flute Lives Up to Its Name

As if to prove how much a small company can achieve on a tight budget, West Bay Opera has mounted a triumphal production of Mozart’s Magic Flute.

The majority of performers achieve equal mastery. At the top of the list are the Three Ladies — Liisa Dávila, Molly Mahoney, and Michelle Rice — who ironically transcend their identities as attendants to the thoroughly evil Queen of the Night (Dana Pundt) to open the opera with the most sublime singing of the three-hour performance.

Pundt is right up there — way up there — with them. Not only do high Es and Fs hold no terror for her, but she also injects a credible amount of evil drama into the vocal thrills of “Die Hölle Rache.” Kudos to WBO's General Director, Jose Luis Moscovich, for snatching her up from Des Moines and Seattle, and setting her loose in Palo Alto.

And then there is the larger than life Papageno of Eugene Brancoveanu. Thanks to the baritone’s large, well-projected, and beautiful voice; copious wit; and equally impressive physical dexterity, his bird catcher seizes the stage and brings the production to life. It’s hard to tell how much of his schtick originates with him, and how much comes from director Daniel Witzke, but he is perhaps the only performer onstage whose every look and movement is energized with intention. Brancoveanu’s Papageno is so brilliantly conceived and sung that it, along with his Don Giovanni, deserves to be seen on major stages worldwide.

As Pamina, daughter of the Queen, Ellen Teufel displays a lovely lyric soprano whose slender, fetching quality harks back to the less homogenized and more individual sound of German and Italian sopranos of the early and mid-20th century. It's the voice of a flower primed for the visit of its honeybee, and perfect for Pamina. Teufel’s ability to be genuinely touching — even at strict time, her “Ach, ich fühls” was quite moving — does much to compensate for the fact that she does little more than stand there and look lovely as she sings beautifully.

As Prince Tamino, Brian J. Kuhn was one of several artists who, on opening night, improved as the production progressed. Initially underpowered, he may have been intimidated by the early arrival of his great aria, “Dies Bildnis ist bezaubernd schön,” whose final phrases he failed to build into a heart-seizing arch. While there was much beauty in his singing, he never projected the spiritually exalted sound that can make Die Zauberflöte such a transcendent experience.

While as The Speaker, one of Sarastro’s priests, Douglas Nagel achieved impressive levels of profundity, Kirk Eichelberger’s Sarastro initially sounded like a coarse thug. Though his singing greatly improved in the second and final act, with impressive low notes, the combination of tone and libretto left him sounding more like a chauvinistic boor than a wise, inspiring spiritual leader.

Also mismatched for his role was Michael Desnoyers’ impeccably voiced Monostatos. Not only did Desnoyers sound and look far too lovely for such a despicable individual, but he and Witzke steered so far away from any possible associations between Monostatos’ ugly behavior and his racial identity as a Moor as to render the character mildly amusing rather than disgusting.

Far more vocally on the mark were Melissa Batallés Papagena/Old Woman, who was nigh perfect; the two armored men, Alan Briones and Jason Sarten; and the Three Boys, Aidan Bannon, Drake Jordan, and Benjamin Bruxvoort (who seem to be members of the Ragazzi Boys Chorus, and who return for the June 1 production). But couldn’t Witzke have done something more than basically stranding the chorus members, supernumeraries, boys and girls, and principals who are not naturally gifted actors, and given them something more to do than just mill about or stand and sing?

Save for his long sales pitch and sluggish opening to the overture, Moscovich conducted with considerable skill, a fine sense of pacing, and a singers’ conductor’s sense of what tempos worked best for each artist. There was nothing that could be done, however, about the tendency of at least one of the violinists to begin far too many phrases well under pitch. Thank God for the superb flute of Michelle Caimotto, and the perfect glockenspiel/keyboards of Bruce Olstad.

Despite some weaknesses, the Queen of the Night’s curse was thoroughly dispelled by the cumulative accomplishment of production, casting, and intention. All told, this is a wonderful Flute, whose strengths far outweigh its weaknesses.