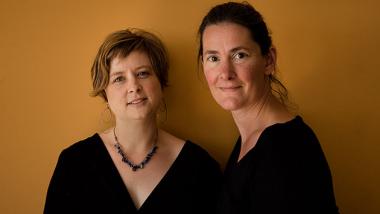 The most inspiring concerts fuse music and emotions into compelling narratives. In  “From Beethoven to Debussy to Adés,” cellist and pianist duo martha & monica (Hadley McCarroll and Monica Scott) accomplished that, sparking a discussion about the interplay between artistic creation, interpretation, and history, which introduced an inspiring concert.

More than a chamber recital, martha & monica, who just completed their third, strong performance this season as artists-in-residence at Old First Concerts, took the Sunday afternoon audience on an intellectual and emotional journey into the inner workings of the mind and soul of the artist. While illustrating the art of perfect collaboration, the performers  also inviting noted author Sylvia Brownrigg and composer Thomas Adés to join the conversation.

McCarroll and Scott began with Beethoven’s Cello Sonata No. 1. From the perfectly synchronized opening motif through the lively rondo, the musicians demonstrated exceptional technique. Unfortunately, this performance was hampered by the reverb of the auditorium, which occasionally produced muddiness between Scott's subdued cello line and McCarroll's intrusive pedaling. Only in sparser moments and solos could the vibrato-drenched emotion of the cello be fully appreciated.

The Debussy cello sonata, whose original title “Anger at the Moon” was discussed in the pre-concert talk, was influenced by the untimely death of the composer’s wife within the backdrop of World War I.

The composer’s anguish was poignantly expressed by the musicians. The second movement disclosed a rare moment of Debussyan near-atonality, with layered stabs of pizzicato and low notes matching the strife found in other modernist music. The third movement, following from the second without a break, served as a synthesis between the divergent styles of the first two movements, enabling the cello to shine through the dense, warm chords of the piano.

“Music is a window into another time and place,” said Thomas Adés in conversation. His  work, Lieux retrouvés (Revisited Places, 2009) illustrated that idea and dove into the depths of dissonance suggested by Debussy’s cello sonata, throwing in shades of Messiaen, Stravinsky, and late-period Arvo Pärt for good measure.

McCarroll and Scott lived and breathed their interpretation as if every phrase was a day in their lives and every movement a moment of despair they had experienced before. While the prior works only suggested the chemistry between the two, this work, particularly the second movement, consisting of competing melodies and textures, only could have worked this brilliantly with performers so completely in sync with each other.

McCarroll and Scott lived and breathed their interpretation as if every phrase was a day in their lives and every movement a moment of despair they had experienced before.The return to Beethoven’s Cello Sonata in C major, Op. 102, No. 1 was initially sonically jarring, but ultimately closed the narrative arc. The duo delivered a nuanced performance of this majestic and progressive piece, offering mature, multi-dimensional phrasing that enlivened each repetition. It was clear that they were summoning a boldly different Beethoven than the composer whose sonata had opened the program. Here, the two musicians’ extraordinary chemistry – nearly a decade in the making – allowed them to weave between crisp articulation and seamless ensemble playing.

The best concerts are not always where you expect to find them. Old First Concerts' schedule is well worth looking into.