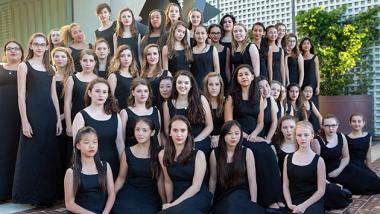 The captivating power of the human voice drives all choral concerts, even when composers move into abstract territory. For proof, consider the San Francisco Girls Chorus, whose vocal prowess is hard to resist.

Opening the Music at Meyer 2015 concert series at Temple Emanu-El, this concert, to paraphrase Saturday Night Live’s Stefon, had everything: arias from The Marriage of Figaro, transcriptions of Estonian folk songs, choral pieces specifically arranged for the Girls Chorus by Philip Glass, and much more.

Showcasing the considerable talents of 46 14- to 18-year old female vocalists, the award-winning SFGC opened with “Lauliku Lapsespoli” (The bard’s childhood), a folk song arranged by eminent Estonian choral composer Veljo Tormis as well as “Virmalised” (Northern Lights) from Winter Patterns, also by Tormis. Immediately transfixing, the songs highlighted the crystalline soprano voices, which was heightened by crisp enunciation of every syllable. Forgoing vibrato for clarity, the Chorus raised the bar high in the opening pieces, the hall’s dry acoustics accentuating their chime-like tones.

Threaded between the choral pieces were solo arias and art songs of uneven quality. Where the lack of vibrato brought bell-like resonance to the choral work, it created an almost shrill tone during many of the solo, largely soprano performances. The power of the vocalists was formidable (even with the dry acoustics of the auditorium), but a few of the young soloists had issues with pitch. What’s more, a few underplayed or overplayed the theatricality of the pieces, perhaps lacking the maturity to find the emotional center of the works. Nonetheless, a couple of stand-out performances should be noted: In an excerpt from Mozart’s Le Nozze de Figaro, Nia Spaulding’s bel canto was exquisite, as was her subsequent duet with Noemie Hamker.

“Father Death Blues” from Philip Glass’ chamber opera Hydrogen Jukebox was thoughtfully arranged by the composer and Girls’ Chorus Artistic Director Lisa Bielawa, transposed from SATB to treble. The piece aptly demonstrated the minimalist sensibilities of both Bielawa and conductor Valérie Sainte-Agathe. (Sainte-Agathe was a long-time associate of Steve Reich.) The Chorus showed maturity beyond their years, finding the emotional peaks and troughs of this splendid work.

The Chorus showed maturity beyond their years, finding the emotional peaks and troughs of this splendid work.An encore performance of the Schubert lieder “Du bist die Ruh” literally and figuratively enveloped the audience, as the chorus left the stage and circled the pews of the synagogue. The sense of surrounding sound (in contrast to the “surround sound” of stereo) brought out the artistry of each vocalist, without compromising their choral integrity.

Throughout the evening, the Chorus presented this perfect unity time and again, adroitly led by their brilliant artistic director and conductor. While some of the solo pieces missed the mark, the choral works more than compensated, delighting the packed audience with a rich, sonorous and wholly memorable experience.