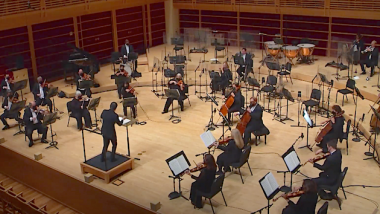 In some ways the Santa Rosa Symphony’s Nov. 15 concert on YouTube resembled a conceptual-art performance from the 1970s. On display were about 30 masked orchestral musicians playing six-feet apart from each other on stage, some of them separated by plexiglass barriers. In the 1970s, the concept behind the performance would have been that orchestral musicians make music with their hands, not their mouths. In 2020, the reality is that it’s still possible to play music if you keep your distance.

The concert, originally recorded at the Green Music Center on Nov. 7, featured two dances by contemporary American composers, rags by Scott Joplin, a Canzone for cello and orchestra by Max Bruch, and Beethoven’s masterful second symphony. Each piece was introduced by a member of the orchestra, a format that helped put the players in the spotlight, rather than the conductor, Francesco Lecce-Chong.

The Symphony played everything well, but the standout performance was by Principal Cellist Adelle-Akiko Kearns in the Bruch Canzone (a song resembling a madrigal). Kearns, who introduced the piece, produced a beautiful tone in her cello’s upper registers and played Bruch’s magisterial themes with authority and grace. Never rushed, her line flowed almost continually throughout the piece, helped by seamless changes in bow direction, spot-on intonation, and a wonderful vibrato that helped each note stand out.

The effect was serene. The orchestral accompaniment barely rose above a murmur, letting the cello’s rich sounds expand throughout the hall. At the end, Kearns’s fellow players burst into applause.

The full title of the opening movement is “The Romance of Hsiao and Ch’in,” two traditional Chinese instruments. According to Chen Yi’s program notes, the orchestra plays the part of the ch’in, a seven-string zither. One infers that the violin soloists play the part of the hsiao, a vertical bamboo flute that carries melodies. And what melodies they were! From the opening note, Zhong and Maruyama launched into a heartfelt duet marked by expressive glissandos, wide vibratos, and occasional unison playing at the octave. The orchestra plucked along, creating a soothing backdrop for the violins’ romance.

The dance in the second movement opened with a traditional-sounding Chinese melody but quickly evolved into rapid phrases from the soloists, with a percussive orchestral accompaniment. Both soloists played splendidly, taking turns spinning out their riffs over the constantly moving background. Their tremolos near the end were particularly effective. 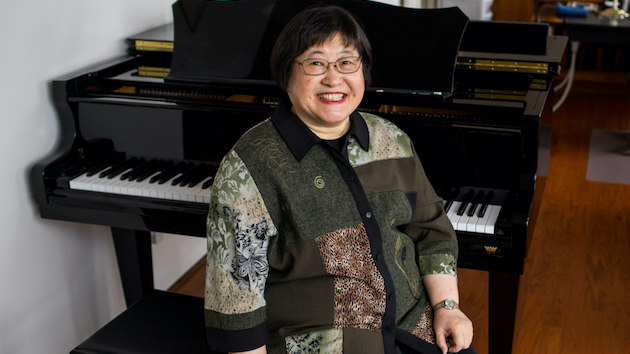 The concert opened with a string orchestra version of the “Coquetos” movement from Leyendas: An Andean Walkabout, by Berkeley native Gabriela Lena Frank, whose ancestry is Peruvian, Chinese, and Lithuanian. As implied by the title, Frank is also a musical anthropologist, and she drew her inspiration for the piece from visits to South America.

True to its roots, Coquetos features strongly syncopated themes with a forceful rhythmic drive. The themes moved around the various sections of the string orchestra, all of which played with vibrancy and flair. The bass section was often propulsive, highlighting the powerful melodies that soared above them. Sadly, the piece came to an abrupt end only three minutes after it began.

Two other American compositions rounded out the first half: Scott Joplin’s piano rags The Entertainer and Maple Leaf Rag, as arranged for orchestra by Gunther Schuller. The switch from piano to orchestra proved revelatory. The strings often served as the piano’s left hand, whereas the winds and brass played the “ragged,” syncopated melodies of the right. The trumpet solo in the Maple Leaf Rag was pure delight.

The second half of the concert was given over to Beethoven’s second symphony, which lurks in the shadows of the first and third. Fortunately, no shadows were evident in a performance that bristled with tenacity and energy. The brooding opening movement, with its multiple sforzandos, ratcheted up the tension until the cellos burst forth with the main theme. Each section of the orchestra could be distinctly heard, aided and abetted by Lecce-Chong’s rhythmic clarity. Beethoven’s strong narrative impulse was evident throughout.

The orchestra played the remaining movements with the same brilliance as the first. Lecce-Chong, who conducted without a score, was unrelenting in his brisk pacing and precise gestures. The second movement was idyllic and the third continually surprising. In the fourth, Lecce-Chong increased the tempo, but the orchestra kept pace, with the strings dashing off impeccable runs. The orchestra was building up to a blistering climax when they reached one of Beethoven’s dramatic pauses and collectively caught their breath. And then they were off again, right up to the final chord.

Conductor Francesco Lecce-Chong shows his stuff in symphonies from Mozart and Mahler.