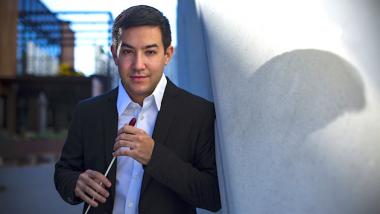 Francesco Lecce-Chong was handed two warhorses for his debut as conductor of the Santa Rosa Symphony, and he rode them both to thrilling victory. For the first win, Brahms’s Violin Concerto, he owed much to soloist Arnaud Sussmann, but for the other triumph, Beethoven’s Fifth Symphony, he and his musicians deserve full honors.

Beethoven’s Fifth is the primary source of the modern symphony, the achievement against which all others are measured. Not a note is wasted within its tightly reasoned structure, and all of them need to fall into place at exactly the right time. Aside from one negligible false entry, the Santa Rosa players fulfilled that duty to perfection, culminating in several spine-tingling passages that rose far above the notes on the page.

Lecce-Chong, whose final audition concert with the Santa Rosa Symphony was cancelled by last year’s firestorms, introduced Beethoven’s masterwork by observing that “Beethoven’s Fifth is about us” because it celebrates the human spirit and our triumph over adversity. In that context, the performance became even more meaningful, offering not only closure for a local tragedy, but also buoyant optimism for the future.

A large part of that optimism was due to Lecce-Chong’s presence at the podium throughout the concert. He conducted flawlessly in the first part of the program, but he really shone in the Beethoven. His crisp and precise beat was easy to follow, and his technique was exemplary. He highlighted stark contrasts between the legato and staccato passages, he let the syncopations ring out, and his dynamics were clearly evident. Moreover, he achieved all of this with minimal movement. He leaned forward and crouched down as necessary, but he was never showy. In the third and fourth movements, he was electric.

So too was soloist Arnaud Sussmann in Brahms’s Violin Concerto. Sussmann is an imposing soloist who stands straight right next to the podium, with both orchestra and conductor well within his peripheral vision. His tone is gorgeous, and he projects well, soaring high above the orchestra with ease. His many other virtues are self-evident: perfect intonation, ramrod-straight bowing, tremendous dynamic range, and blistering speed.

Sussmann’s phrasing, however, easily trumps all his other virtues. He carries phrases all the way through, heedless of bar lines or other restrictions that impede the flow of melody. He played whole sections of the concerto in one continuous line that sang from start to finish. His bow seemed glued to his strings as he leaned into melodies, completely dominating the stage.

Sussmann’s performance was dazzling, but it could have been even more so if he had ventured closer to the front of the stage, particularly in the first movement’s lengthy cadenza. That was his golden opportunity to emerge from the orchestra’s shadow and fully engage with the audience, but he took only a few tentative steps into the vacant space.

Even warhorses start out as foals and yearlings, as evidenced by the inclusion of both a brand-new work on the program, along with another of less recent vintage.

The foal was Sonoma Strong, a remembrance of last year’s fires by Santa Rosa native Paul Dooley, who teaches at the University of Michigan. Lecce-Chong waited for dead silence before starting the piece, which begins with whirling-sounding tubes that evoke the wind. Over this ominous noise, a solo trumpet enters, followed by a harp, a trumpet duet, a trumpet trio, and then a full-blown trumpet solo over strings. Despite the increasing numbers of players, no conflagration is evident. Instead, the melodies are soothing and restful. The pace picks up when a conga drum enters, but the mood veers toward the triumphant rather than the incendiary. In and of itself, Sonoma Strong is laudable, but the connection to the firestorm is hard to fathom.

Ellen Zwilich’s 1984 Celebration for Orchestra, the yearling that opened the program, was more successful in its stated purpose. Celebrate the orchestra it does, also beginning with the trumpets, who repeatedly play a simple two-note phrase before fading out. That phrase becomes the unifying element that allows the orchestra to celebrate its sonic diversity. The two-note sequence moves through the various sections, building up anticipation as the volume increases. A sudden pianissimo followed by the ringing of bells brings the celebration to a close.

The Santa Rosa Symphony’s music director bows out with a strong reading of Mahler’s epic Ninth.

The young, gifted Francesco Lecce-Chong will step into the position.