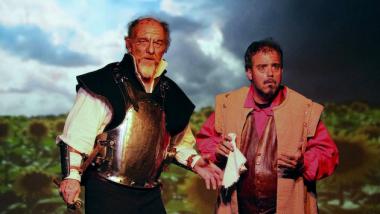 Vladimir Nabokov famously said that Miguel Cervantes’ Don Quixote is “a veritable encyclopedia of cruelty.” But cruelty is banished from Island City Opera‘s current production of Jules Massenet’s last work, Don Quichotte. The French opera shows the would-be knight errant at his most tender and whimsical. The comedy was helped along by a fine cast of local singers.

The production, directed by Igor Vieira — best known as a robust baritone who sings all over the Bay Area — is cute. It works well in the Elks Lodge Ballroom in Alameda, basically a tiny and adorable stage without a proper orchestra pit.

The five acts were handled straightforwardly, using props and furniture borrowed from other local theaters, shifted by many indefatigable stagehands. The show started at at the “Albergue de los Alces,” moved to a field of sunflowers evoked with a projected background and silk flowers downstage, traveled through a dark forest, then a bright ballroom, and, finally, an inn.

There was a jarring, polyglot moment in the third act, with five French-singing bandits who spoke in English. Although current in some opera houses when operetta is performed, the French-English solution made for some odd conversations. The two valets in Act IV also joked in English, but sang in French.

Above all, the singers are the reason to come hear this opera company. It is a wonderful chance to discover the immense talent of Bay Area singers close at hand. Bass William Pickersgill is in the San Francisco Opera Chorus and has taken many small, solo roles for the company, so it was a treat to hear him in the title role of Don Quichotte. What a pretty, poignant voice!

Director Igor Vieira did double duty as a sympathetic Sancho and his strong, resonant sound was delightful. His scolding of Don Quixote’s tormentors at the end of Act IV (“Riez, allez, riez du pauvre ideologue”—Laugh at this poor idealist) was particularly good. The star of the show was, however, mezzo-soprano Buffy Baggott — another regular at San Francisco Opera. Her Dulcinée was impeccable. Her voice is rich and sultry from top to bottom and she dazzled throughout Act IV but especially in “Oui, je souffre votre tristesse” (I share your sorrow).

Tenors Michael Belle (Rodriguez) and Darron Flagg (Juan) along with sopranos Eileen Meredith (Pedro) and Maria Caycedo (Garcias) rounded out the cast with cheerful aplomb and seemed very comfortable singing together. As was the case with the chorus, despite being barely a dozen people, the members sang with considerable volume.

Predictably for a company that is focused on singers, the orchestra was not much of a force. Pushed over to one side of the room, conductor Philip Kuttner was unable to get the orchestra synchronized with the singers. The strings were often out of tune, though the cello solo from Gabriel Beistline in the last act was nice.