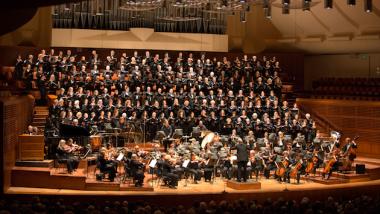 When you see the 200-strong, amateur San Francisco Choral Society pour itself into Giuseppe Verdi’s Requiem, you're seeing and hearing something that was part of the composer's vision of the piece.

Many have called it an opera in disguise, like the oratorios of Handel. But the point is that, like Handel’s works, the chorus in the Requiem represents a community with strong internal cohesion. Verdi suggested as much by dedicating the work to Alessandro Manzoni, a great writer who had been lionized by the Italian nationalists of Verdi’s generation. And the music’s concentrated power comes from the powerful interplay of individual voices against the group throughout the work, and most dramatically in the long Dies Irae prayer. That may be why amateur choruses have always been among the work’s most ardent champions.

The Choral Society performed the Requiem energetically on Saturday night at Davies Symphony Hall, really putting on a show that displays the depth and breadth of vocal talent here in the Bay Area. This group of amateur singers, headed by leading choral conductor Robert Geary, accompanied by the California Chamber Symphony, and bolstered by four talented professional soloists, may not have been entirely cohesive but more than made up for it with sheer enthusiasm. And the drama of humanity calling out in deep anguish and humility, and looking for solace in fearsome circumstances, was conveyed.

The all-volunteer chorus sounded most together in the high volume, sections, especially the thunderous “Dies irae,” that repeats throughout the movement. The thumping, emphatic bass drum part was played with great determination by Tim Dent. Much later in the work, the double chorus, fugal Sanctus movement was utterly joyful.

The orchestra was vibrant under the baton of Geary, though, again, they seemed to do best when less exposed. The brass in the “Tuba Mirum” (A trumpet, spreading a wondrous sound) sounded tentative, though in tune, and the woodwinds were sloppy in the otherwise lovely trio of soprano, mezzo, and tenor in “Quid sum miser” (What shall I say, wretch that I am?). There was a distinct lack of clarity, too, in the “Lacrymosa” at the end of Part II, fizzling out after the theatrical vocal fireworks of the soloists. (It’s no surprise to learn this music is based on a duet from Don Carlo). After a brief tuning break before the second half of the piece, the orchestra definitely sounded better.

Underpinning and even perhaps elevating these enthused nonprofessionals was a quartet of fine soloists, all opera performers well known to Bay Area audiences, and perfect for this very operatic Requiem.

Soprano Hope Briggs, who has been heard at San Francisco Opera, Opera San Jose, and Festival Opera, gave a passionate yet tasteful turn here. Her voice is piercing but beautifully controlled. She played just on the edge of shrill in the Agnus Dei movement but her “Libera me” with the chorus that caps the evening was simply sublime.

Contralto Edith Dowd (a Merola Program participant in 1996) was most impressive in the mezzo-soprano part, with bright top notes and sonorous low ones. It was obvious from the very beginning that her unusual voice is flexible and very strong. She created an incredible column of sound in her “Recordare” duet with Briggs, but managed to still be singing with her rather than at her.

Both our male soloists were memorable Adler Fellows in the 2000s at San Francisco Opera, tenor Noah Stewart and baritone Eugene Brancoveanu. Both have rich-toned sounds with much heft.

Stewart sang with powerful clarity, especially in the famous “Ingemisco,” where there is nowhere to hide and his voice came through sweet and ringing. He also sounded dulcet in the “Hostias” quartet.

The bass part sat a little low for Brancoveanu, especially in the “Confutatis,” but he was vibrant and clear in most of his range. He sounded great with the other soloists, blending well and supporting others with his warm, resonant sound. The “Lux aeterna” for mezzo-soprano, tenor, and bass was particularly lucid.