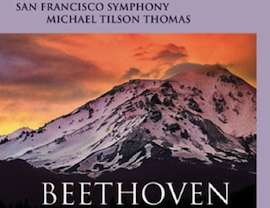 A Masterwork of Beethoven from S.F. Symphony

Having completed their award-winning series of Mahler symphony recordings, Michael Tilson Thomas and the San Francisco Symphony have embarked on a survey of the one symphonist who’s an even bigger monument than Mahler: Beethoven. Whether the world actually needs another Beethoven symphony cycle on CD is a separate question. Based on the evidence available, though, it’s getting a pretty good one.

The Third, Fifth, and Seventh have already been released, and the Second and Fourth were recorded in performance in May for future release. The CD at hand presents the biggest of them all, No. 9 in D Minor, recorded in concert last June.

The Ninth stands apart from all the other Beethoven symphonies, and not just for its sheer length and the essentially unprecedented presence of a choral movement in a symphony. Its scope, as well as its size, outweighs the others, as does the granitic shape of its first movement, which builds up more out of a hum and a mood than a motive, let alone an actual theme. It’s the only symphony of Beethoven’s traditional last period, and the twelve years that separated its premiere from that of the Eighth was almost as long as the time it took Beethoven to write all eight of its predecessors.

The highlight of this performance is the slow movement, usually the weak link in the chain of a performance of the Ninth. This movement does have a theme, and a lovely one. MTT leads a particularly beauteous account, achingly slow and thoughtful in the opening, then speeding up just enough to increase the graciousness, providing a little bounce in the violin decorations on the repeats of the theme.

The opening movement, also taken slowly, tends towards the stately rather than the dramatic. Large cataracts of sound pour out of the orchestra in strict tempo, without sonorant resonance or much volume contrast. The scherzo, the only movement that’s played faster than in the average performance, responds better to a similarly strict treatment. The triple rhythm builds along with an energetic bounce, with crisp exchanges among strings, winds, and timpani.

Throughout the symphony, a distinctive San Francisco sound makes this recording stand out. The strings, dry yet expressive, are equipped both to enliven the slow movement and to give hard energetic tags in the development of the first movement. The winds, cultivated and piquant, strike off each other in ensemble particularly well. The sonic focus of the recording moves around among the various winds, and shifts back and forth between strings and winds when they share a melodic line.

Throughout the symphony, a distinctive San Francisco sound makes this recording stand out.

The final “Ode to Joy” is, of course, the movement without which this symphony would be most conspicuously incomplete. Here MTT’s steadiness in conducting holds together the sudden and drastic shifts in mood. The cello recitatives have a rough edge behind their expressiveness. More a bass than a baritone, Nathan Berg spits out the lower-lying parts of his solos with vigor. Tenor William Burden is smoother-voiced and particularly free in his expressiveness. Soprano Erin Wall gave a bright shining top to the vocal ensemble, with mezzo Kendall Gladen fitting more subtly underneath.

Not enough can be said in favor of the chorus, directed by Ragnar Bohlin. With enthusiasm and attention to detail to spare, the voices fairly stride over the orchestra throughout the Ode’s bombastic chaos. Even the trumpets and horns at full blast do not overpower the singers. Yet the engineering is crafty enough to let some little-heard details, like string figurations behind the chorus, be heard.

This is a satisfying recording of a masterwork of music, and a pleasing memento of what today’s San Francisco Symphony sounds like in concert.