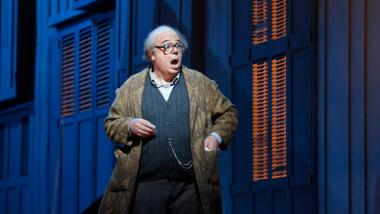 for his first appearance, Maurizio Muraro, in the title role, is a dozing, decrepit pillow of flesh. Awakening with a snort in his over-sized armchair, he comes bounding to a vividly felt comic life that centers and animates the evening.

Playful and pathetic, vain and bashful, bulbous and light-footed, fuming and fatuous, humiliated and touching, Muraro makes the centuries-old archetype of the foolish old man in search of a young wife into something revitalizingly fresh. A performance that would succeed if he never sang a note is rooted in a tree-trunk solid bass-baritone that’s as deeply grained and highly polished as a finished piece of mahogany. If ever there were a single opera buffa performance that’s worth the price of admission, this is it.

Everything Muraro does in this pert if sometimes overly striving production of Donizetti’s 1843 work delights and gratifies. When the scheming Dr. Malatesta (baritone Lucas Meachem) first proposes that Pasquale marry the doctor’s sister (soprano Heidi Stober posing as the virginal bride-to-be), the old man turns giddy with anticipation. He capers about, strumming his cane like a love-struck swain’s guitar or using it as an oar to row toward his imagined connubial joy. His first meeting with Stober is a marvel of erotic excitement and boyish abashment. Nervously tapping the fingers of both hands together, he’s like an Italian version of the comic character actor Ed Wynn, almost airborne in his sweetly ludicrous exuberance.

Again and again, in florid arias, firmly anchored duets and ensembles, adroitly phrased recitative and ferociously funny and syllable-perfect patter songs, Muraro makes Donizetti’s bel canto flights and filigrees seems as natural and fluid as spoken dialogue. Over long passages the supertitles become superfluous, so clearly is the character drawn and sung. Muraro embodies every line and gesture, hoisting the stock figure of an old fool into something so uniquely stamped that Pasquale seems newly made and invented before the audience’s eyes and ears.

From the start, conductor Giuseppe Finzi seems to anticipate the riches Muraro is about to unfold. His reading of the eventful, high-contrast overture is as limber and colorful as the title performance. The orchestra’s responsive and supple work continues throughout, even as this Pasquale loses its fizzy momentum in the final act.

In a coproduction with Santa Fe Opera and Barcelona’s Gran Teatre del Liceu, director Laurent Pelly uses the Italian sex farce movies of the 1950s and ’60s as a visual touchstone and comic plaything. The central playing space of Chantal Thomas’ set rotates between the patently pasteboard facades of Roman houses on either side of the stage. The sense of movie-set artifice is maintained in the way doors and features of physical reality are blithely upended. Sometimes characters come in and out through the three doors of Pasquale’s house, and sometimes they ignore them and simply barge around the edges of the set walls to enter or exit. The furniture itself defies all natural laws of gravity in the third act.

Tenor Lawrence Brownlee, in his company debut, plays Pasquale’s indolent nephew Ernesto. It’s his love for Norina (Stober’s real identity) and prospects for inheriting Pasquale’s fortune that drive the tissue-thin contrivances of the libretto. Supporting a lofty Little Richard pompadour and idly stirring his late morning coffee, Brownlee’s Ernesto cuts an amusing if broadly drawn figure at first. His singing, reedy and constricted in the early going, subsequently opens up. He hits his stride in a sulky, wounded “Mi fa il destine mendico,” sung inside a closet as he packs his clothes to flee his very temporary misery. His love serenade in the third act is all buttery smoothness, offset by a labored ladder-and-paper moon sight gag.

Stober, who plays her first number as borderline drunk, brings a steely, precise tone to Norina. But in both direction and execution, her performance comes off as brittle vamping next to Muraro’s carefully molded and detailed Pasquale. Everything from her put-on shyness to her spendthrift excesses to her insistent, hard-edge vocalism feels mechanically applied rather than inhabited.

Meachem’s Dr. Malatesta is a generally sound portrayal, even if his voice tends to thin out noticeably at the low end. Bojan Knežević turns in a minor comic gem as a hapless, mush-mouthed notary hustled onstage to affirm the bogus marriage.

With its stronger first two acts performed before intermission, the perfunctorily plotted third act feels like a bit of an afterthought. A threadbare garden set, where all the shenanigans will be revealed and the proper lovers united, doesn’t help. But Muraro, looking more virile now that the scales have fallen from his eyes, finds yet more comic and musical gold to mine. He may have been tricked and cuckolded, but he’s no mere figure of fun, whether in lamentation or a final frenzy of patter song fury (sung in tandem with Meachem). The night, from Pasquale’s absurd high hopes to his crash landing, belongs to the remarkable Muraro.