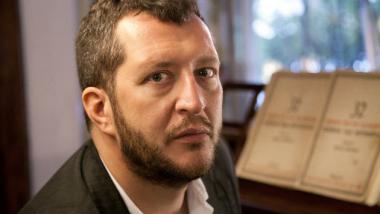 A little less than six years ago at San Francisco’s Herbst Theatre, British pianist and composer Thomas Adès gave the U.S. premiere of his Concert Paraphrase on the opera Powder Her Face. Based perhaps on the idea that two are better than one, Adès returned to Herbst on Saturday, Oct. 30, joined by pianist Gloria Cheng, to perform his newly arranged two-piano version of the piece. While the pairing resulted overall in a highly engaging and successful recital of 20th- and 21st-century piano works, some of the virtuosity found in the works was often lost to the split responsibilities.

Adès’ 1995 opera Powder Her Face may not be as well-known as his more recent The Tempest, but it is the superior of his two stage works. The opera follows the scandalous life of Margaret, Duchess of Argyll, whose 1963 divorce case shocked the British public, especially the naughty Polaroid photographs that surfaced of the Duchess wearing nothing but a rope of pearls. Adés and his librettist Philip Hensher depict the downfall of the British aristocracy, represented in Margaret’s pathetic descent — at the end of the opera, she is evicted from her hotel, unable to pay her bill.

The Concert Paraphrase highlights four scenes from the opera — Margaret’s “Ode to Joy” (Joy by Patou eau de toilette, that is), her maid’s “Fancy being Rich” aria, the hotel manager’s eviction aria, and the spicy tango that brings the work to a close. There is a heavy use of popular genres in the work, especially those from Margaret’s heyday in the 1920s and ’30s, though Adès’ skillful imitations of jazz-era pop tunes are filtered through his own spikey musical language. His arrangements are the perfect blend of catchiness and complexity.

In the original solo version of the Paraphrase, Adès indulged in 19th-century style virtuosity — there are rapid 64th-note runs and arpeggios that call to mind Liszt’s paraphrases on operas by Mozart, Bellini, and Verdi. Along with these more traditional pianistic gestures, there are modernist technical feats, including intricate polyrhythms between the right and left hands. The contrapuntal complexity of the original was therefore present, though less impressive considering the division of labor.

Yet the virtuosic “edge” of the solo version was lost in Adès’ two-piano arrangement. The composer seemed to simply divvy up the solo version among two performers so that Cheng sometimes only played a single melodic line — usually the original vocal line from the opera —while Adès provided accompaniment. The contrapuntal complexity of the original was therefore present, though less impressive considering the division of labor. Perhaps this two-piano version will provide a more accessible entry into Adès’ piece for amateur players who are unable to perform the virtuosic version for soloist.

The kind of polyrhythms found in the Powder her Face paraphrase were also present in Adès two-piano arrangements of Conlon Nancarrow’s Study No. 6 and 7, which opened the program. Nancarrow, an American-born composer who defected to Mexico in 1955, is known for his 50 player piano studies. In these eccentric, jazz-influenced works, Nancarrow takes advantage of the player piano’s ability to execute impossible rhythmic and metrical combinations at inhuman speeds.

Adès’ transcriptions bring Nancarrow’s studies into the human realm. As in the Powder her Face paraphrase, the automated virtuosity of the player-piano version is divided between two pianists, allowing four hands to reproduce what was once producible only by a mechanical apparatus. This called for extreme concentration on the part of Cheng and Adès in the breakneck seventh study, which requires the players to coordinate oddly proportioned, asynchronous rhythms.

Adès seemed delighted by his own transcription, which kept him smiling through the whole performance. He also made reference to the mechanical origins of Nancarrow’s studies, attacking pitches in a robotic manner in imitation of a player piano. And while the piece was not played at nearly the speed of Nancarrow’s piano roll — Adès in his score suggests 112 beats per minute for the human version versus the original 140 — Cheng spun out some of the fastest runs I have ever heard produced by a flesh-and-blood pianist, launching her physically off the top of the keyboard at the end of the piece.

Ligeti’s 1950 Sonatina for piano-four hands served as a fun companion piece for the Nancarrow transcriptions. Like Adès, Ligeti found inspiration in the player-piano studies of Nancarrow, incorporating polyrhythms and mechanized melodies into his late piano works. Though Ligeti hadn’t heard of Nancarrow in the ’50s, his early Hungarian-style Sonatina already displays the sort of meccanico aesthetic affinity that would later attract him to the American composer’s works in the 1980s. Adès drew this connection between the two composers’ piano pieces by employing the same kinds of robotic fingerings and attacks that he had utilized in his Nancarrow transcriptions.

For the second half of the program, Cheng and Adès left behind the world of the mechanical and the popular in favor of the mystical and sacred. Their performance of Messiaen’s 1943 Visions de l’Amen traced a musico-spiritual journey in which Messiaen explores the various meanings of the prayer-closing “Amen.” In the third movement, “Amen de l’agonie de Jesus,” Cheng drew an ethereal, crystalline sound from the upper octaves of the piano while Adès embodied the suffering of Christ through dramatic playing techniques, including pounding out black-note chords with his fist and depressing keys with a violent thumbs-down gesture.

Equally theatrical was the seventh movement, “Amen du jugement,” in which Cheng slammed down on a thick cluster chord in the lower reaches of the keyboard, a motive that appears throughout the movement like an apocalyptic black hole.

But the pair channeled the greatest intensity into Messiaen’s triumphant final movement, “Amen de la consummation,” which celebrates the divine consummation of God and his Church in Paradise. There were more of the asynchronous rhythms found on the first half of the program as the final trumpet call came blaring from Adès’ hands while bells rang out in Cheng’s part. The pair played the movement’s finale with unrivaled technical and emotional brilliance, allowing the endless final chord to ascend heavenward and into the infinite beyond.