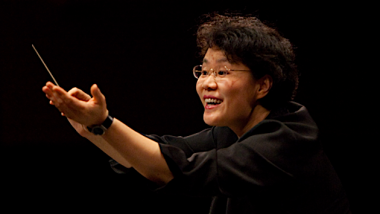 These days the focus of Santa Rosa Symphony concerts is as much on the conductor candidates as on the soloists. This past weekend’s concerts featured the second of those candidates, Mei-Ann Chen, along with pianist Nareh Arghamanyan, each of whom cut an imposing figure on the stage.

Chen is diminutive but powerful, with an exacting style of conducting that commands attention. Arghamanyan likewise commands attention with truly elegant playing punctuated by dramatic flings of her long brown hair.

These two wonderful musicians collaborated on Tchaikovsky’s well-worn yet always surprising First Piano Concerto but not until Chen had warmed up the orchestra with a frenetic dash through Shostakovich’s Festival Overture. From the heraldic opening in the brass to the triumphant final notes, the emphasis was on speed and exactitude. Chen set a quick and easy-to-follow beat that encouraged meticulous playing and tight ensemble. Her gestures were confident, and she used the entire podium to her advantage, jumping up and down excitedly in the rollicking final bars. The applause was vigorous.

Having established her street cred, Chen moved to the background for the Tchaikovsky. She kept the orchestral volume firmly under control and allowed Arghamanyan plenty of space to revel in Tchaikovsky’s echt Romanticism. The pianist’s opening chords were authoritative, and she projected easily all the way to the back of the hall. She displayed solid control of dynamics throughout the concerto, from thunderous fortissimos to delicate pianissimos that inspired rapt silence from the audience. Even more, she displayed an endless variety of keyboard attacks and releases. At times her fingers were jackhammers, at others the lightest of brushes, displaying so little movement that her hands seemed to glide above the keyboard.

All was not perfect, however. At times, Arghamanyan was too heavy on the pedal, and the upper notes of her chosen piano, a Fazioli, sounded muted compared to the ringing tones of the orchestra’s usual instrument, a Steinway. She also flagged a bit toward the end of the first movement, but she sprang right back into action in the Andantino second, where she gave as much attention to the simplest of melodies as to the most dazzling runs. The finale, an Allegro con fuoco, was almost flawless.

Summoned back to the stage after sustained applause, Arghamanyan played more Tchaikovsky as an encore: the “October” movement from The Seasons. The simplicity of the piece belies its emotional intensity, which Arghamanyan kept ratcheting upward the softer she got. There was dead silence from the audience as the piece faded into nothingness.

After intermission, Chen displayed her range by conducting a contemporary work, Jennifer Higdon’s blue cathedral. Higdon’s work is quite approachable for audiences leery of the new, and the architecture of her works, in this instance ecclesiastical, is readily apparent.

In her program notes, Higdon writes that “I was pondering a lot of things about the journey we make after death … I was imagining a traveler on a journey through a glass cathedral in the sky.” This journey is made manifest in the music through a series of two-note phrases in the strings punctuated by outbursts from the percussion and winds. The stepwise motion proceeds inexorably until it bursts into a densely orchestrated volley from the brass, with bells tolling in the background. Tinkling and ringing instruments of many varieties gradually take over, leading to an ethereal sound world at the end.

Chen conducted all of this with great authority and an unerring beat, vividly recreating the journey down the cathedral aisle to a heavenly altar that is fundamentally different from the rest of the space. The performance was good, but the rigid program of the piece left one yearning for something unexpected.

After blue cathedral, the side lights on the stage changed from blue to red, and the stagehands removed Chen’s music stand, letting everyone know that she would be conducting the final work, Mendelssohn’s “Italian” Symphony, from memory. The stand’s absence gave Chen more direct access to the orchestra, and she took full advantage, often leaning so far into the various string sections that she could have touched the front stands with her baton. The pace from the outset was brisk, leading one nearby patron to begin tapping his toes.

Somehow Chen managed to keep a steady beat while devoting most of her attention to musical expression. She used a wide variety of gestures to usher forth the pungent sforzandos, hushed diminuendos, and rapid accelerandos that make for great orchestral playing. She was a pleasure to watch, and apparently to play for, because everyone in the orchestra gave her full attention.

As the Mendelssohn motored forward, Chen often gave only the downbeats or no beats at all in favor of expressive gestures. She brought a sense of urgency to the opening Allegro vivace, equanimity to the subsequent Andante con moto, and sweetness to the Con moto moderato. Her best conducting came in the final movement, a Presto followed by a spirited Saltarello (a fast-paced Italian dance). This finale is an intricate mechanism that Chen kept ticking perfectly, even though the beat sometimes seemed to be measured in microseconds. From the furious sixteenth-note opening in the strings to the crashing finale, she never let up.

There are three conductor candidates yet to come for the Symphony, but Chen displayed almost everything you could want from a conductor: musicality, confidence, wonderful technique, and restless enthusiasm. She will be tough to beat. 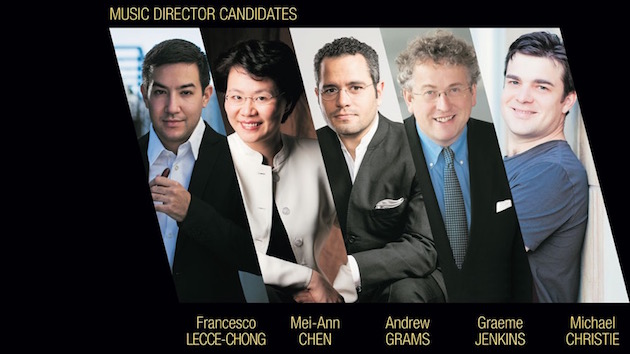 The extraordinary keyboard artist Nareh Arghamanyan is fully in command of color, clarity, and technique with her every note.