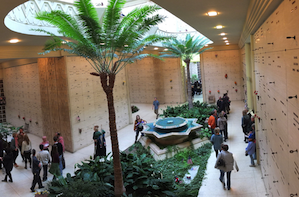 Memories Through a Garden of Music

I stood inside the Chapel of Eternal Help, wondering whether to hang a left or a right. It was the summer solstice, and my internal GPS had failed me hours earlier when I’d become happily lost during the walk-through evening concert in Oakland’s labyrinthine Chapel of the Chimes. As I wended my way through the mazelike interiors of the vaguely Gothic, vaguely Moorish columbarium designed by Julia Morgan, I encountered one musical discovery after another in cast-concrete chapels, stairwells, interior gardens, and cloisters. Then I heard this music: mesmerizing, Nels Cline–like electric guitar riffs. I followed the chords to the Chapel of Patience, where prog-rock guitarist Henry Kaiser sat playing like a modern-day Pied Piper as others, like me, found themselves drawn to the tiny, vaulted chamber illuminated only by the remains of the day pouring through a small stained-glass window.

I stayed to listen to Kaiser, one of more than 50 performers who cast their musical spell as part of Garden of Memory, an annual four-hour event that New Music Bay Area and Lifemark Group presented on Friday. After a while, I moved on, going up a short flight of stairs and rounding a hallway of glass cases of urns shaped like library books until I found myself in a light-filled atrium. There I met Meghan Ballog, a contact-improv dancer from Berkeley in flowing garb, who had attended the event twice before, including once as a performer. “I love the active adventure of discovering music, and the fluidity of it all,” said Ballog, waving her fabric-draped arm around the atrium. “You’re given the mobility to discover different music and access it.” Her friend and fellow East Bay contact-improv dancer David Flaig agreed. It was his first time at the concert, which a friend had suggested he attend. “I am totally blown away,” said Flaig, festively clad in purple, leopard-print leggings and a yellow T-shirt.

After more exploration and more music, I stopped by a cast-concrete bench on which a boy lay stretched out, staring curiously at the sunlight still falling through the vaulted glass ceiling.

A few feet away in a small interior garden, a cellist and a violinist played angular compositions that suggested deconstructed Celtic tunes from a lonely island off Scotland’s northernmost coast. As I passed into the Chapel of Consolation, an unexpected cellist tucked away between two glass cases of urns was in the midst of a languid duet with a keyboard player opposite him on the other side of glass case of urns.

My feet weary, I sat alone in the Chapel of Confidence when the sound of chimes rang forth and I got up to follow its origin. There in the Chapel of the Holy Word I came upon three guys dressed in bright-yellow plastic overalls and black caps. It was the Italian composer Luciano Chessa, sporting a bullhorn, and two other musicians playing an amplified quarter-tone vibraphone and a quarter-tone guitar. They were performing his work Squeeze! Squeeze! Squeeze! Meditation Over Chapter 94 of Herman Melville’s Moby Dick.

“I love the active adventure of discovering music, and the fluidity of it all. You’re given the mobility to discover different music and access it.” –Contact-improv dancer Meghan Ballog

After a few minutes, I ambled through the Chapel of Truth, which led me to an open courtyard anchored by a small, marble 16th-century Italian fountain.

At that point a snow-globe on a glass case, with a teddy bear inside carrying a bouquet of roses, caught my eye; it was a gentle reminder, along with the Jethro Tull ticket affixed inside the glass case of an urn that I’d noticed earlier in my rambles, as well as the Father’s Day card freshly taped to the front of a glass case, that the Chapel of Chimes was a repository of past lives. 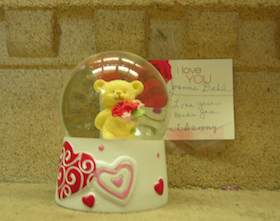 I moved away from the courtyard, beyond the Garden of St. John from which digital audioscapes suggested a soundtrack of spaceships in orbital gridlock, until I reached another courtyard with ribbed-concrete vaulted walls. The enchanted evening was coming to an end. Shards of light streamed down from the courtyard’s glass ceiling as I sat down on the cool tile floor to join other concertgoers, many with their eyes closed, to listen to the ethereal electronic compositions of Lucky Dragons, a Los Angeles–based duo of Sarah Rara and Luke Fischbeck.

Later, after a brief respite of aimless wondering, I entered the Garden of St. Mark where I met Maggi Payne, who has performed at Garden of Memory concerts since 1995, when pianist Sarah Cahill first broached the idea to fellow board members of New Music Bay Area and to the Chapel of the Chimes. Payne had installed a souped-up theremin, an instrument that produces an eerie sound — think Dark Shadows — produced by waving a hand toward and away from its antennae. 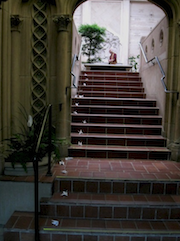 “Do you play it?” I asked Payne, a performance artist and codirector of the Center for Contemporary Music at Mills College, as I moved my hands around the antennae, surprised by the elasticity of the musical sound produced. “No,” replied Payne, tossing a sheath of waist-length auburn hair behind her shoulder. “I just use it as an installation because I thought it would be fun to have something interactive.”

I left Payne as she started to box up her installation and continued down a cloistered hallway to arrive at an open stairwell from which the haunting vocals of Pamela Z rose up to the glass ceiling above and floated through the surrounding corridors as thinning crowds fanned out toward lower levels. I shortly followed their lead and was about to exit when I heard the sudden, melodic pitch of voices that also caught the attention of a young couple behind me. What we’d heard was the final beat of the Cornelius Cardew Choir performing the four-hour version of Pauline Oliveros’ The Heart Chant.

“See what happens when I leave the building,” one-half of the couple, a guy in a black porkpie hat, jested, squeezing his companion’s hand. She nodded playfully as they strolled out into the warm, moonlit summer night. Headed somewhere, direction unknown.