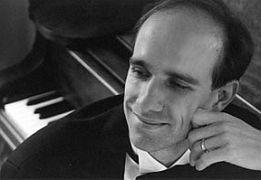 Jason Victor Serinus on January 29, 2008
“Was he hitting all the notes?” I asked the highly respected Bay Area pianist who was assiduously following Messiaen’s score in the seat in front of me at UC Berkeley's Hertz Hall. “Hitting all the notes?” he replied with more than a touch of incredulity. “I’m too busy trying to figure out the rhythms!” That anyone could have managed to hit all the notes and make sense of Olivier Messiaen’s impossibly difficult score would have been accomplishment aplenty. But that pianist Christopher Taylor apparently also played Messiaen’s approximately 130-minute work flawlessly and entirely from memory was astounding. It is doubtful that many of us who heard Taylor’s transcendent traversal of Messiaen’s Vingt Regards sur l’Enfant-Jésus for Cal Performances can imagine another pianist making an equal impact in such challenging music. Messiaen began writing his masterpiece in Paris on March 23, 1944, a year after his release from the German prisoner of war camp in which he was interned in 1940. Composing during some of the darkest days of World War II, soon after he had completed Visions de l’Amen, the Catholic mystic finished Vingt Regards on Sept. 8, just two weeks after General Charles de Gaulle liberated the city from its German occupiers. The work was premiered by the woman for whom it was written, Messiaen’s piano student and future wife, Yvonne Loriod, on March 26, 1945.

While acknowledging darkness as an essential component of Christ’s birth, death, and resurrection, Messaien’s statement of faith is far more about transcendence than suffering. The score for Vingt Regards — a word which program annotator Jane Vial Jaffe notes is variously translated as contemplations, looks, gazes, views, or aspects — utilizes the full length of the keyboard. It also incorporates a host of influences: numerology, Roman Catholic symbolism, birdsong, Eastern instruments and instrumentation, complex mathematical relationships, and Greek and Hindu sources (for starters). At the premiere, Messiaen commented upon Vingt Regards in a spoken introduction, which he later incorporated into a written preface to the work's first edition. Together they explain, to the extent that one can adequately explain, music whose language is so personal: “Much love, joy, suffering and meditation are at the origin of this work. … More than in all my preceding works I have sought here a language of mystical love, at once varied, powerful, and tender, sometimes brutal, in multicolored arrangements.” I’ll say. Other than when the composer is intentionally obscure, his musical symbolism is as impossible to miss as his seeming references to Twinkle, Twinkle Little Star, Gershwin’s Rhapsody in Blue, and Wagner’s Der Engel (among other works). At the low end of the keyboard, Messiaen seems to speak from the bowels of hell, as if acknowledging the pain of the forthcoming crucifixion. At the other extreme, he pounds at heaven’s gates, as though nothing other than repeated bursts of light can possibly convey the extent of God’s eternal brilliance. In between, such as in "4: Regard de la Vierge" (Gaze of the Virgin) and "19: Je dors, mais mon coeur veille" (I sleep, but my heart lies awake), we find passages of ineffable tenderness. At least that’s how it sounds in Christopher Taylor’s hands. Tall and lanky enough to inhabit another dimension without Messiaen’s help, Taylor approaches the work as if on assignment from the Divine. Arpeggios, broken chords — anything and everything Messiaen could think of — are handled with aplomb. That doesn’t mean he doesn’t at times hunch over the keyboard, caressing the softest tones as if caring for a newborn, and then sit upright to pound the piano into submission.

Clearly, instruments can take only so much. The piano bench that squeaked through the first half of the performance was the best of five that Taylor went through (until another was retrieved from God knows where), and the piano required retuning during intermission before Taylor began the remaining 10 regards. The first time I heard Taylor perform Vingt Regards, in the Napa Valley Opera House during the premiere season of Festival del Sole, I did not have the composer’s program notes in front of me. Nor had I ever heard a recording of the work. While it took me awhile to move beyond dumbfounded amazement at watching Taylor grunt, pound, and sweat buckets as he seamlessly proceeded from the most tender pianissimo to heaven-rattling quadruple fortes, all the while acknowledging every possible gradation of volume, tempo, and feeling in between, the cumulative effect of his traversal into Christianity’s ultimately unfathomable spiritual mysteries left me and most of the audience stunned. I exaggerate not when I report that many of us staggered out of the darkened Opera House in silence. Here, the performance was equally extraordinary. But with houselights raised so that we could read Messiaen’s titles and commentaries, total concentration was challenged. In addition, as fine as the Hertz Hall acoustic may be, the direct intimacy of Napa’s opera house made for a more enveloping experience. The next time I attend a performance of this work, I’m closing the program and shutting my eyes. Messiaen demands as much. Regardless, the performance was extraordinary. Taylor, who graduated summa cum laude from Harvard with a mathematics degree in 1992 — two years after he received first prize in the William Kapell International Piano Competition — is a genius. I doubt few present will forget how he lifted us to a realm beyond time and space.

How Do We Find Sasha Cooke Mid-Pandemic?