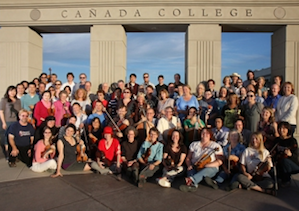 The Redwood Symphony and its music director, Eric Kujawsky, stepped boldly into the aisles of recent music for their Saturday concert at Cañada College in Redwood City. The three works on the program, all by established American composers, are not brand-new. They were written between 1985 and 1999, so they’re at the stage of their history when today’s musicians and audiences are beginning to consider whether they’ll be regarded in the future as among the masterworks of their time.

Walking the paths of programming recent music can be tricky. The ideal goal is to avoid sterile, academic claptrap on the one side and soggy, lowest-denominator hackwork on the other, finding work that can both appeal to listeners and display intellectual heft. All three of these compositions manage to thread that narrow path, I think. Not that John Corigliano’s Symphony No. 1 is at all immediately accessible on first listening; certainly, I had not found it so. Lou Harrison’s Piano Concerto With Selected Orchestra and Jennifer Higdon’s blue cathedral (yes, it’s spelled without capital letters) are more inviting, yet still remain something of a challenge.

All three intrigue sufficiently on first hearing to invite further encounters, and they then repay that interest by becoming even more enriching on repetition. That process, I believe, is the mark of a masterpiece-in-waiting. For me, as a listener who’d heard all three works before (though the Harrison only on CD), the Redwood Symphony performances were steps on that road to understanding.

Corigliano wrote his symphony in memoriam for AIDS victims he knew. He alternates between anger at these untimely deaths and sorrow at the loss of his friends. Sometimes the anger takes the form of massive outbreaks of chaos. Here is where the nonprofessional musicians of the Redwood Symphony shone the best. They’re not afraid to run a little ragged in the service of art, and they know how to do it. The passage in the frantic “Tarantella” second movement, where the composer directs the solo winds to ignore the conductor’s beat and drift to a confused stop, and the concluding primal scream, were both vivid and punchy. So were the muted trumpets, as well as the section of “primeval,” deep, wind solos beginning with Mia Stormer’s contrabassoon and Bill Menkin’s contrabass clarinet. Of the movement’s intermittent cheerful dancing solos, Joan Hebert’s clarinet came out the most fluidly.

Corigliano alternates between anger at these untimely deaths and sorrow at the loss of his friends.

In the first movement, the anger imagery is less chaotic and more evocative of a powerful machine. The critical moment when that machine pulsates to a halt while losing none of its power or volume came off, in the orchestra’s performance, more like a runner panting across the finish line, determined to make it past every obstacle.

The second half of the symphony is more sorrowful. Cellists Aaron Baca and Tony Gansen made their way gamely through the long double solos that make up much of the third movement. Quiet backing from the other strings matched them in ardor, most conspicuously from the violas, under acting leader Frank Chang. Various wind tags displayed considerable character. At the end of the movement, the rage motifs from the first movement returned with towering impact.

The brief, resigned finale is dominated by soft waves of sound from the brass. Played at a brisk tempo, these washed through nicely. The cello solos reappear, as does an offstage piano playing ghostly echoes of an Albéniz tango, first heard in the quiet middle section of the opening movement over a deliberately disconnected string melody. Orchestral pianist Delphean Quan darted off and on stage, as required, to play both this and the onstage piano part. I’m not sure how audible the Albéniz was during the first movement for listeners who weren’t expecting it; it was definitely lost during the finale against the somewhat louder brass.

Calling Up a Stampede

Harrison’s piano concerto is a long, rambling work featuring a lot of noodling for the tireless, even-handed soloist, Louise Costigan-Kerns. The “Stampede” second movement (title derived from the medieval dance form estampie) was liveliest, with the soloist’s tone clusters, often for the forearm, which Harrison borrowed from his teacher Henry Cowell. Here and in the slower third movement, the accompaniment was dominated by percussion, with particularly crisp and energetic drumming from Ben Bressler. This worked better than the more string-dominated first movement.

Harrison was interested in older tuning systems, more flavorful than our modern equal temperament, and directed his concerto to be played in one of those intonations. (Thus his “selected orchestra,” consisting of strings and trombones — the instruments capable of adjusting their tunings — and unpitched percussion.) For this performance, the musicians attempted no such thing, and Costigan-Kerns played on the same Baldwin that Quan used for the onstage piano parts of the Corigliano and the Higdon, which don’t call for special tuning. I would not expect these volunteer string players necessarily to have command of such delicate adjustments, anyway. The result seemed to me to be detectable in a certain lack of tang in the concerto’s sound — compared to the recording with its dedicatee, Keith Jarrett — as it floated along on its rather bland, yet pleasant, way.

Higdon’s brief work, which concluded the concert, is a light-toned, crystalline gem of imaginative construction and delicately luminous tones. It was the most beautiful work on the program, and, indeed, one of the most attractive recent compositions I’ve had the pleasure of hearing. Redwood’s performance struggled a little with the fleetness and sonority of the music. Still, it contained some fine playing, particularly from Peter Stahl, a late substitute for an ill colleague, on English horn, and Michael Odynski on oboe.