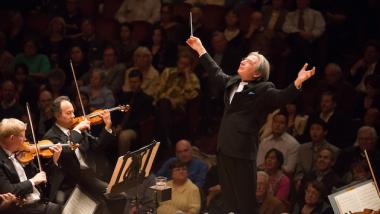 The second movement was a train wreck. I was there at Davies Hall on Thursday afternoon, gaping and rubber-necking along with all the other slack-jawed witnesses.

That’s not to suggest that the San Francisco Symphony came unglued in the Allegretto “Comedy” of Charles Ives’s Symphony No. 4. It’s the listeners who are sent careening through the composer’s wild Americana ride, snatching at snippets of closely and distantly familiar tunes — hymns and “Turkey in the Straw,” the bugle reveille and “Long, Long Ago,” and many more — as they go whipping by into the maelstrom. Just when the centrifugal force of it all threatens to plunge everything into chaos, a becalmed Chopinesque piano passage washes in. A viola murmurs wistfully. A bass drum sends out a muffled irregular heartbeat. And then the train takes off again.

One conductor isn’t enough to keep it all charging along to an uncertain fate. Music director and committed Ivesian Michael Tilson Thomas had help from Christian Reif in the most densely plotted polyrhythmic episodes.

Like that second movement, which is (somehow) based on a Nathaniel Hawthorne tale and appropriates music originally meant for the Concord piano sonata, this amazing work, at once capacious and intense, has a complicated structure, provenance and backstory. Composed over a seven-year period (1909–1916), revised eight years after that and performed in partial form over subsequent decades (like a slowly released serial novel), the Ives Fourth finally received its fully fleshed world premiere in 1965, 11 years after the composer’s death.

A half-century later, its vitality and invigorating variety remain undimmed. The symphony is scored for an enormous ensemble that includes two pianos (one quarter-tone tuned), an “ether organ” (now played by a synthesizer), a chorus, and two-offstage bands, one of which (a haunting percussion troupe) is positioned under the stage. Peter Dugan, in a stirring solo turn, manned the downstage piano keyboard in a tour de force of hammered chords and sprawling passage work. In certain stretches, this symphony behaves more like a piano concerto bursting at the seams.

The musicians, onstage and off, are enlisted to follow a path that begins in a thunderous outburst, which quickly gives way to the becalmed and melting harmonies of the opening Prelude. Here and throughout, Ives draws the listener into a state of mind that is at once embracing and deeply, disorientingly strange. By this short movement’s end, the musical ideas had, in their structures and striking instrumentation, the feel of great tectonic plates shifting and sliding against each other.

After the vertiginous second movement, Ives unfurls a conventional seeming Fugue, its tender melodic contours almost Copland-esque. But even before the strings can complete their orderly entrances, the French horns and then trombone enter to be heard. The effect is somehow communal, like a Quaker meeting where people speak when moved to and remain silent otherwise. The final movement, marked “Largo maestoso,” is indeed majestic as it weaves “Nearer, My God to Thee” and other hymns into a force field of clotted and clearing harmonies. In its quiescent closing measures, a kind of grateful but unresolved calm descends.

MTT led a performance of gleaming and fierce delight in the symphony’s musical and emotional challenges. The strings built the deep undertow and added bittersweet solos. The woodwinds chortled and mocked and took their well-behaved turns in the pews. The brasses and percussion seemed almost reckless in their exclamations.

Reaction to a piece of music is always personal. My own, in this case, was turbulent. I felt exhilarated, agitated, unsettled, even upset by what had happened. Ives’s blend of reverence and jaunty impertinence for his source material felt impetuous, impassioned, and subversive. At times, it seemed that American history itself was speeding by and vanishing in a kind of time-lapsed blur. Yet even as it went, there it was preserved to be heard again and again falling into the vortex. Great works of art — and this is surely one of them — are paradoxes that refuse to sit still and be understood and comprehended on one hearing or many. The train goes on speeding by to destinations unknown and perhaps unknowable.

There was another masterpiece on the bill — the Beethoven Violin Concerto, with Pinchas Zukerman as soloist (Viviane Hagner was slated to take up the fiddle at Saturday’s final performance). While this expansive concerto could never seem like an afterthought, there was something downright routine about the performance. Zukerman used a slightly dry and sinewy tone, precisely rendered runs, tight trills, and forceful double-stops to get the job done, but the concerto lacked distinction and character. Tempos turned glacially deliberate at several points. Phrasing and emphases were muted.

Perhaps, after the Ives, both the listeners and symphony musicians had spent most of their capital. If so, they had done so on a fully rewarding investment.

A curious program pairs Ives with Dvořák and a misplaced serving of Gershwin.

The Ives Quartet performs a program that would have drawn a spectrum of reactions from the namesake composer.