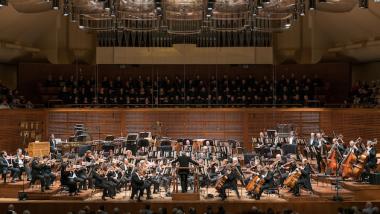 From slave owners of yesteryear to modern-day virtual canaries relentlessly chirping “America First” to lives courageously led in any era that inspire faith in the beautiful myth of the American Dream, the phrase “American Masters” can conjure many things.

For American composers, “mastery” can mean brilliantly assimilating the European classical tradition, boldly rejecting it, or anything in between. On Sunday afternoon at Davies Hall, the San Francisco Symphony explored a few possible meanings by performing two works by Charles Ives and one by Antonín Dvořák. Then — like a cloying, sweet dessert after a Michelin-starred dinner — Gershwin’s An American in Paris closed the concert.

A pre-concert talk was offered, but Musical Director Michael Tilson Thomas also introduced the pieces during the concert itself. He explained that the two pieces in the first half — Ives’s Psalm 90 and Dvořák’s The American Flag — were written within a year of each other (around 1895). As Thomas surely knows, Ives indeed began his piece around then, but he doctored it for about 30 years. He wrote this psalm setting for mixed chorus, percussion, and organ, the last of which was offstage on Sunday.

At Yale, Ives barely graduated, partly because he liked to do subversive things such as playing one melody in two keys at the same time. Then, Ives supposedly settled down and composed on the side while working in boring insurance. But neither of his pieces performed this weekend adhered to this calcified narrative. While undoubtedly original, these pieces leaned toward the mastery-defined-as-assimilating-the-European-tradition side of the spectrum.

According to the program notes, the psalm itself is about disparities between finite human life and unknowable, infinite time. Regardless, the music opened with five organ chords that sounded like the start of a science-fiction soundtrack. Emanating softly but in full-force, seraphic hymnal lines from the San Francisco Symphony Chorus immediately followed these chords.

Pronounced juxtapositions happened repeatedly in this ten-minute work. The most striking was at the very end, when the sci-fi percussion sounds returned, albeit stacked upon a chorus that proceeded as usual while fading into nothing.

Programming Dvořák in a program called “American Masters” was interesting from the get-go: He was a fiercely nationalistic Czech composer who, by invitation, came to the U.S. late in life. He was supposed to “discover” and to write down American folk tunes, just as he did in his native country.

The most immediate difference between the first piece and Dvořák’s The American Flag was the full orchestra joining the chorus for this second work. In American Flag, the chorus melted into the orchestral palette like a beloved-yet-neglected chocolate bar into the dashboard of a hot car. Meanwhile, two vocal soloists — tenor Amitai Pati and bass-baritone Philip Skinner — conveyed intelligible and emotive text. Before intermission, the pair drew standing ovations for this piece that weaved an exotic tapestry of largely forgotten American tunes.

Like American Flag, Ives’s Symphony No. 3 (“The Camp Meeting”), which is under-performed even though it earned Ives his Pulitzer, is based on several and once-commonplace American hymns or tunes that are now mostly lost or unknown. MTT made use of the Chorus by having the ensemble sing five such tunes before beginning the orchestra-only symphony.

Over the course of the first movement, “Old Folks Gathering,” the orchestra itself gradually gathered for a pastoral celebration. The second movement, “Children’s Day,” ended with softening and thinning forces that sounded like a gaggle of well-exercised kiddos gradually falling asleep.

But the closing of the third movement, “Communion,” lingered longer both literally and in my own mind because it sounded akin to the end of Psalm 90. Both pieces employ comparable orchestration: dying chords and weird percussion. Symbolically, though, they both sounded like Ives was trying to say something important about an American culture he once knew that he worried was dying away.

Ives may have known some cohesive culture in which most people knew the same songs. Luckily, America doesn’t even aspire to being such a place anymore. That said, I left this concert concerned that Ives was timelessly and presciently right to wonder — in his own, idiosyncratic musical voice — about this country losing, however slowly and softly, core facets of its ideal identity.

The program features the world premiere of Ted Hearne’s Miami Movements, a work he created with crowdsourced input from Miami locals.