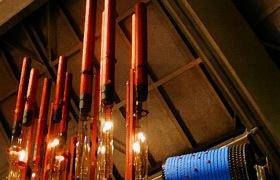 Much Ado Intrigues yet Fizzles

The event that Stanford Lively Arts put on in Memorial Auditorium on Saturday was not a concert, though it did have music, and not a play, though it did have dramatic structure, and not a “happening,” though most of the audience had no idea what to expect. It could be called performance art or a theater piece. Titled The Gurs Zyklus, it was conceived by a man named Trimpin, who is ... well, that’s hard to say. The program notes call him a kinetic sculptor and sound artist. The five performers on stage, one of whom doubled as the director, and a music technology assistant, behind the scenes, also helped create the work, which was imagined for this particular stage and put together during rehearsals over the previous two weeks. It’s the culmination of Trimpin’s year-long artistic residency at Stanford.

The piece was inspired by Trimpin’s empathy for the victims of the Nazi Holocaust and the Spanish Civil War, tied together by a concentration camp at Gurs in southern France that held victims of both. (See SFCV’s preview article for more on the complex web of background.) Most of this was explained in the piece’s own narration — a huge mistake, since an artistic work shouldn’t include a commentary on its own significance.

As a musical composition, The Gurs Zyklus runs somewhat over an hour in length, for a narrator and four female singer/speakers, accompanied by a battery of instruments, some of them conventional tuned percussion — pianos, xylophones, castanets of varying pitches — and some of them strange contraptions invented by Trimpin himself. All were acoustic, exploiting the natural sounds of air, water, and even fire, and all were wired up to be played live by computer software controlling electromagnetic relays, without further human participation.

The stage was dominated by two large metal frame teeter-totters and two consoles with what looked like large candelabras on top: Trimpin’s invented musical instruments. The pianos and xylophones were spread about the front of the hall to allow spatial effects. The performance began with four women walking on stage carrying mason jars that they carefully set down on the floor. Then they went offstage to fetch more jars. The point of this didn’t remain mysterious for long. A contraption hanging from the ceiling was designed to drip water in rhythmic patterns, making different musical notes as the drops fell into the already partially filled jars. Then the castanets joined in, and as letters of the alphabet began to appear sequentially, projected on screens at the back of the stage, it dawned that the rhythm and pitch of the notes represented Morse code. This, the narration awkwardly explains, alludes to an encoded telegraph ordering the assassination of the poet Federico García Lorca during the Spanish Civil War.

So far, so good. After that, though, the music was intermittent, separated by long stretches of spoken narration and of pretty much silence. The four women — Thomasa Eckert, Susan Rode Morris, Linda Strandberg, and Katya Roemer, all experienced singers of contemporary music — did more speaking in rhythmic patterns than singing. Their finest moment came in a section in which, speaking short phrases in quick turns, they produced a kind of canonic verbal effect, each phrase repeating, alternating, or pushing the narrative on from its predecessor.

Much to Say, and Furiously

The narrator was the show’s director, Rinde Eckert. His part was purely dramatic rather than musical. He read a condemnation of García Lorca’s execution in a fast fury, angrily throwing down onto the floor the successive pages of his script. At the end, these pages, now representing the letters sent by the Holocaust victims, are tenderly retrieved by the women: a nice touch, and about the only way the work artistically connects the two wars.

The instrumental music was sparsely scored, stark and vacant. This work lacks the grandeur of, say, an opera by Philip Glass, though it’s not nearly so abstract in concept as Einstein on the Beach. As with the vocal speaking, there was one particularly good bit: a flush of elaborate melodic monophony with added chords, intermixed with sudden elaborate runs on the pianos, all derived from some of the more whimsical and Spanish-flavored of the studies for player piano by Conlon Nancarrow, with whom Trimpin at one time worked.

While this was going on, the five performers were pulling at, examining, and piling up a roll of brown paper. What the thinking was behind this action, I couldn’t say. On the other hand, it was too easy to figure out the meaning of a long, tedious sequence of the women repeatedly touching and knocking together three glass balls hanging from the ceiling while uttering wavering cries, assuming that the viewer recognized the date projected on the screen as that of Kristallnacht.

Sounds floated in space, à la György Ligeti or Luciano Berio, or moved about the hall, less elaborately than Henry Brant would do it. There were touches, too, of George Crumb in some pointillistic ooh sounds from the singers, and a faint echo of early Steve Reich as they clapped blocks together behind narration.

Toward the end, Trimpin’s invented instruments finally broke in. The candelabra-bearing consoles were fire organs, which used thermoacoustics to make a deep, throbbing sound. The teeter-totters held wheels with loudspeakers mounted in them. Trimpin was curious as to what noise live loudspeakers would make if sent rolling: It turned out to be a whooshing sound, so now we know.

As a technical accomplishment, The Gurs Zyklus was most ingenious. Considering the number of invented devices and wired connections needed for the show, and that the performers were still working out the shape of the piece in rehearsal onstage when I came by at noon on Friday to hear the composer give a talk, it’s remarkable that nothing went spectacularly wrong on the day. That’s formidable technical competence. (Trimpin spoke of visual effects to be produced by the dripping water. If these happened, I missed them; more to the point, though, I didn’t miss them, for any lack of either their production or my perception didn’t detract from the performance.) As a musical work, it consisted of a series of interesting bits, separated by long nonmusical stretches, that didn’t add up to any larger significance. As a drama, it struggled to find profundity in the coincidences that brought Gurs to Trimpin’s attention. And as a stage work, it skirted the edges of randomness and boredom without quite falling in. It was interesting enough that it didn’t feel like a complete waste of time. An experimental work like this should press my “wow” button, though, and this didn’t do it.