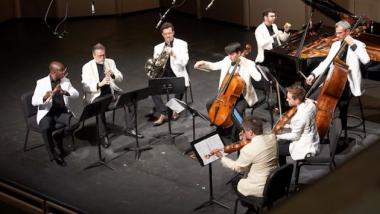 Festival directors David Finckel and Wu Han have assembled some of the most prominent musicians and educators from around the world, and they also scheduled some fascinatingly unfamiliar works for these concerts of music associated with “cultural epicenters.”

In fact, festival maven Patrick Castillo introduced the program by saying that he suspects “many in the audience would be coming to much of the repertoire for the first time,” adding that “in the case of the Shostakovich Impromptu, they surely would all be discovering it for the first time, as it is a West Coast premiere.” Even for someone like me, who lived in a country under Soviet influence and was somewhat familiar with the composers, the works were all new.

Peter the Great had St. Petersburg built in the early 18th century with the intention of creating a cosmopolitan center of Russia, and over the years the city emerged as the country’s cultural center.

The festival program featured Mikhail Glinka (1804–1857), and one of his more accomplished disciples, Mily Balakirev (1837–1910), who was the anchor of Russia’s Mighty Five (with César Cui, Aleksandr Borodin, Modest Mussorgsky, and Nikolay Rimsky-Korsakov).

In 1862, Anton Rubinstein founded the St. Petersburg Conservatory, one of the world’s major music schools, which produced — among many others — two other artists represented in the program: Anton Arensky (1861–1906) and Dmitry Shostakovich (1906–1975). The latter, of course, is the best-known composer outside Russia, but even his work performed in The Center for Performing Arts at Menlo-Atherton is a fresh revelation.

Arensky was among the most prominent Russian musical figures of his time. He studied with Rimsky-Korsakov in St. Petersburg and was a professor at Nikolai Rubinstein’s Moscow Conservatory, where his pupils included Rachmaninov, Scriabin, and Gliére.

Glinka is best known for his grand opera, Ruslan and Lyudmila, locally well remember for its 1995 performances in the War Memorial by St. Petersburg’s Mariinsky Opera company.

As in the opera, Glinka’s mix of Western chromaticism and the sound of what made him to be considered “a fountainhead of Russian classical music” is clearly evident in the festival offering, the 1832 Trio pathétique. A brief, charming, melodic work, it was a perfect appetizer to the evening, performed by Jose Franch-Ballester (clarinet), Peter Kolkay (bassoon), and Michael Brown (piano).

Changing the mood, Arensky’s 1894 Quartet No. 2 in A Minor presented Arnaud Sussmann on violin, Paul Neubauer on viola, and an unusual pair of two cellos, with David Finckel and David Requiro. This emotional and brooding work is dedicated to the memory of Tchaikovsky, who had died a year earlier.

Bracketed by movements based on Russian orthodox chants, the middle of the work consists of variations on a Tchaikovsky melody. The closing movement is especially powerful, the finale a crescendo restating the “Slava” (Glory!) melody of the orthodox funeral Mass — familiar from works as divergent as Beethoven’s String Quartet Op. 59, No. 2 (“Razumovsky,” appropriately enough) and Mussorgsky’s Boris Godunov. As in the opera’s Coronation Scene, the “Slava!” theme also lifts the trio above the mourning to a heroic resolution, the four performers virtually flying off the stage.

Opening the evening’s second half, Balakirev’s 1856 Octet for Winds, Strings, and Piano, Op. 3, provided yet another aspect of Russian music’s East-meets-West roots, combining effortlessly folk music (quoted and paraphrased) with the sounds of 19th-century Paris, London, and Rome.

At a duration of only 13 minutes, the Octet is actually just the first movement of a planned large-scale work, but it gives clear indication of the composer’s mastery in orchestrating individual voices. Among the performers, standouts were Demarre McGill (flute), Michael Brown (piano), and “Ring Master” hornist Kevin Rivard.

There must have been a conversation about the order of the program to avoid a finale without catharsis, but placing the other Shostakovich there, a charming, uplifting novelty, was not possible — so it was performed before the songs.

Violist Paul Neubauer and pianist Wu Han got huge applause for their performance of this two-minute Impromptu ... and yes, you read that right: two minutes.

The tiny West Coast premiere was of a 1931 manuscript discovered only last year in the Moscow State Archives. Dedicated to the violist of the Glazunov Quartet (Alexander Mikhailovich Ryvkin, 1893–1951), the piece is true to the name of impromptu: a short musical passage that seems to have been made spontaneously.

Take a Tour of the 2018 [email protected] Festival

Photographer Geoff Sheil shares some images from inside the expansive chamber-music program.