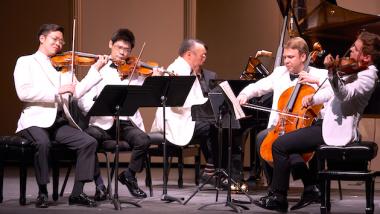 [email protected] has picked a set of seven European cities as the “Creative Capitals” theme for this year’s chamber music festival, with concerts displaying the artistic treasures of each city’s musical history. Of the seven, Paris is the hardest sell as a fount of great chamber music. Last Tuesday’s program at the Menlo-Atherton Center for Performing Arts made the case.

After a long fallow period since the Baroque, chamber music was brought back to a featured place in French musical life in the late 19th century by two composers of heavyweight reputation, Camille Saint-Saëns and César Franck. They spoke for Paris on Tuesday, along with two of their cheekiest and most urbane 20th-century successors, Francis Poulenc and Jean Françaix.

Françaix appeared in the form of his String Trio. Except for its slow movement, which is less frenetic, this consists of a ceaselessly bustling murmur. Much of the time the players have their mutes on, but even when they don’t, the music — for all its activity — is usually very quiet. Violinist Angelo Xiang Yu, busy with facial expressions and active movements, faced violist Matthew Lipman, calmly playing with an enigmatic smile, but their differing styles didn’t prevent them from perfect synchronization in shared passages, while cellist Efe Baltacigil chugged away securely between them. Occasionally Françaix allows his players to break out briefly. A long passionate solo in the finale allowed Yu to show some of the fervor with which he made Britten’s Suite for Violin and Piano such a riotous hoot at the previous Saturday’s London concert.

Poulenc’s Sextet for Winds and Piano is equally bustling, but its sound is as entirely different from the Françaix as its instrumentation is. It’s a raw piece that evokes traffic noise even more effectively than does Gershwin’s American in Paris. It’s cannily instrumented for all that, and every recording of it I’ve heard sounds the same way, so I must conclude that Poulenc wanted his oboe (Stephen Taylor) to squawk and his horn (Kevin Rivard) to blat, while his bassoon (Peter Kolkay) tries out some of the weird sounds that Stravinsky developed for Le Sacre du printemps. The flute (Demarre McGill) and clarinet (Jose Franch-Ballester) are capable of equally strong squeaks and hoots, but Poulenc keeps them more subdued. Pianist Jon Kimura Parker rumbled along in the background. As with Françaix, there was some contrasting stillness and blending in the slow movement, a Divertissement.

The Piano Trio No. 1 in F, Op. 18, is not one of Saint-Saëns’ best-known works, but he is an underrated chamber-music composer who ought to be heard more. The predominant mood of this performance was chipper good humor, especially in the striving, rising main theme of the first movement. This alternated with a subterranean tenseness that came to the fore in the drone passages of the slow movement. Paul Huang’s violin was drier and more dispassionate than Baltacigil’s emotional cello. They made good partners, though, especially when backed with the strong but not overwhelming piano of festival co-director Wu Han.

Franck’s Piano Quintet in F Minor, by far the most famous work on the program, was less impressive. All the players performed well — cellist Dmitri Atapine joined violinists Huang and Yu, violist Lipman, and pianist Parker — and there were some good individual bits. The buzzing opening of the finale, up through the first statement of the main theme, was impressive, and the final coda was worthy of a more epic performance. What I missed was a sense of command over the larger shape of the piece. For all the effort that went into it, the music didn’t drive or flow as the rest of the concert did.

The red-hot, passionate brilliance of a truly great performance that listeners hope for appeared in — of all things — Ernő Dohnányi’s Piano Quintet No. 1 in the Prelude concert preceding the evening’s event. This Brahmsian work is a favorite at Menlo, but the young professional International Program Artists of the Chamber Music Institute who played this outdid in emphasis everyone else who’s tackled it. The granite implacability of each appearance of the rondo finale’s ritornello, culminating in a final rendition pounded out by pianist Chelsea Wang, was just the last highlight. The equally committed string players were violinists Katherine Arndt and Hannah Tarley (a former concertmaster of the San Francisco Symphony Youth Orchestra), violist SoHui Yun, and cellist Sihao He.

Combine that with the other Prelude offering, a whistling run through Beethoven’s String Trio in C Minor, Op. 9, No. 3, that came off much like the Françaix Trio with the volume turned up — violinist Adelya Nartadjieva, violist Erin C. Pitts, and cellist James Kim were the players — and it proves yet again Menlo’s secret, that the free Prelude concerts are often as good as or even superior to the main events.