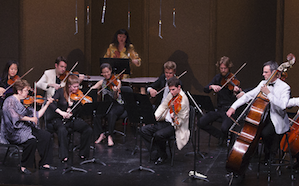 Surprise and delight mixed in Wu Han's exuberant, fortissimo greeting to the full house Saturday: "Welcome to [email protected]'s 12th season!" The Co-Director gave voice to what festival organizers, artists, and loyal audiences were thinking: how fast time flies, and how this bold venture has thrived and made a name for itself worldwide.

[email protected] sprang full-formed from the start, a dozen years ago, but each subsequent season reconfirmed and enriched its excellence.

With Dvořák as the festival's unifying theme, the concert opened with a "boffo" performance of Mozart's Serenata notturna as an exception to the rule. Other than the music's irrepressible dance, nothing could possibly connect it to the 19th-century Czech master — but no one in the amused and pleased audience was complaining.

Dvořák proper followed, with the Escher Quartet's performance of his 1878 String Quartet No. 10 in E-flat Major, Op. 51. The composer's countryman and an illustrious member of the following generation, Bohuslav Martinů, was represented with his 1949 Three Madrigals. And then came Bartók’s 1939 Divertimento for Strings, whose Central European sound and generous use of folk themes were easy to to relate to Dvořák.

The extraordinary performance of the Bartók demands priority. With Erin Keefe as the first violinist, this large ensemble of soloists (and no conductor) served up the sound of a symphonic orchestra, with passion and energy that bounced off the walls. The stunning virtuosity of the powerful first and third movements took second place, behind the night music with monsters lurking within the unforgettable Allegro non troppo in the center of the work.

Remember the year of its creation: The middle movement fully reflects the fear and sense of impending doom of Europe in 1939, even in the relative safety of Switzerland where Bartók wrote it.

From the sublime to the ... no, not ridiculous, but wonderful musical humor to relish. The Mozart Serenata notturna opened like gangbusters, a bit on the blowsy side, with a thoughtful, well-crafted middle movement of a stately but lively minuet. And then all hell broke lose — probably in a way the (semi-fictional) "Amadeus" would have greatly enjoyed. There are not enough smiles and laughter at Mozart performances, so [email protected] made up for it, stylishly; demonstrating from the start of the concert that it's willing not to take itself too seriously.

Taking what Richard E. Rodda's program notes correctly call "a chuckling theme in the first violin" from instrument to instrument, the musicians played hilarious variations, until reaching Pingel, who produced brilliant, (apparently mostly improvised) variations on the theme. It all culminated in a lengthy riff, complete with wiggling eyebrows, tricking the other musicians to think they can return to what Mozart hath wrought — but then continuing unabated.

Martinů's Madrigals, name notwithstanding, have an eminently 20th-century sound, and the composer's unique voice, which is difficult to relate to others. The work is melodic, robust, and a challenge for virtuoso players — a challenge that was more than met by Erin Keefe and Paul Neubauer.

Standing as close to each other as I have ever seen two string players in performance, the physical closeness was also reflected in their blending the sound of their instruments at one point, trading phrases at close quarters. Madrigals do make a kind of indirect appearance in the strummed chords of the viola, reminiscent of the sound of a troubadour, but the work's contemporary essence is heard in the robust dialogue of the first and last movements.

Look for the festival's many attractions, its string-quartet programs, and the rich vein of free offerings, mostly by young artists.